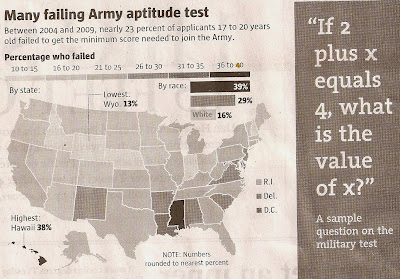 The article appeared in The Denver Post, the same day that DADT('Don't ask, don't tell') finally cleared the Senate after nearly 17 years of bloviation and excuses. The article I'm referencing is headed in one-inch type that reads: '23% Fail Army Entrance Exam'. We're talking here about the Army aptitude test given as part of the induction process - along with the physical. (A sample test question is shown in the accompanying graphic).

According to the D. Post piece, the report by the Education Trust (the first ever publicly issued on Army aptitude test results) shows that the pool of qualified young people for military service continues to shrink. Failing the aptitude test, these youths "are certainly not qualifed to enter the Armed forces".

Well, then enter the militarily -inclined gays- thanks to DADT! If qualified young heteros are too dumb, at least the ranks can be filled by those of the gay persuasion who possess normal intellect or higher. (And it is to be noted, as yesterday evening on an ABC newscast, that many of the military personnel denied service because of their sexual background, were amongst the most competent Arabic translators the military had.) Dumb or super dumb? Or: How or why do you release exactly those who can communicate to you when the next Al qaida strike is most likely to occur and when?

According to Navy Rear Adm. Jamie Bartlett, sounding off on these pathetic admission test results:

Well, uh yeah, you could say that! There's also likely to be an "incline" or rather increase in becoming so desperate (if you can't get smarties from elsewhere) you have to lower the test admissions further OR change the tests to make them easier. In which case you may well end up with 100% bozos that fire on the "friendlies" - and run up the body counts, but on the wrong guys!

(And note that, because of inadequate recruits, the Army's already lowered its behavior admission standards - now permitting many ex-gang-bangers and ex-dope pushers to enter - which may well account for high crime stats at many bases. Including most recently at Ft. Carson, CO, where at least seven soldiers were busted for drive-by shootings, homicides, rapes, robberies and other activities from 2006-08. )

The piece in the Post noted that questions in the current aptitude test are often basic - as opposed to when I took it (as part of the Army induction exam) in March, 1965, where you had to actually obtain an answer based on an analysis: e.g. "If Mr. Jones is two inches taller than Mr. Smith and Mr. Smith is three inches shorter than Mr. White, who is four inches taller than Mr. Sampson, how tall is Mr. Jones if Sampson is the same height as Mr. Black who is 5' 4"?"

Pentagon data, meanwhile, show that three fourths don't qualify for service because of "not graduating from high school, or having a criminal record, or being physically unfit."

According to one professional Georgia educator cited in the piece, "It's surprising and shcoking we are still hacing students graduating from high school who really don't deserve to and haven't earned the right".

And let's bear in mind here just how low the standards for passing this aptitude test are: recruits must onily score 31 out of 99 possible during the 3-hour test to get into the Army. That isn't even a 33%!

Could it really be this nation's youths are getting progressively dummer? Or is the educational system truly as bad as this test appears to expose? (Note: the analysis of test results was based on the scores of 350,000 candidates who took the Armed Services Vocational Aptitude Battery from 2005-2009).

Let's just hope that none of these guys ever goes into politics!
Posted by Copernicus at 11:08 AM