More bible-based Idiocy - Or is it Uniquely Mikey? 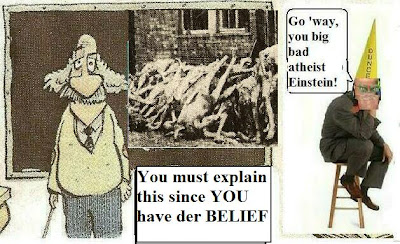 Seems little Mikey is in a fit of consternation at having to vigorously defend and argue for the existence of his deity in respect of its do-nothing attitude to evil, or suffering. But we all know and can agree, when you buy into a whole load of horse pockey, it carries a formidable burden when you must defend it to all comers! Thus, in addition to tossing my gift book into his dumpster, little pastor perplex is also incensed about his own impotence and incapacity in respect of credibly addressing the issues of dukkha (personal suffering) raised in my blog on the Buddha (the documentary film from PBS). Let's look at his reams of nonsense and try to help him sort them out.

"I, for one , am convinced that for most atheists the suffering in the world is really an EMOTIONAL problem , not an intellectual , problem . Their unbelief is born not out of refutation , but out of rejection . They simply want nothing to do with a God who would allow them or others to suffer terribly ."


And, of course, this is the basest codswallop. For we (atheists) have no "emotional problems" - since we've pinned this miscreant and cretin down umpteen times on this issue- but as we can see, he possesses the memory of a sand mite. Let's try to refresh his beleaguered brain cells: we focus on the suffering of the innocents as a result of others' violence. For example, the two Petit girls (Michaela, 11 and Hayley, 17 years old) from Cheshire, Connecticut. In the summer of 2007 these two girls (along with their mom) were set upon in their own home by two vicious, vile beasts- who tied them down to their beds, then tortured and raped them for hours before setting them ablaze using an accelerator (according to court testimony).

WHERE was the great God in all this? WHERE? If God refuses to act in the case of an innocent and on her behalf, or is incapable of action then for all practical purposes He does not exist. It is therefore a useless exercise to introduce a deity at all. One could as well toughen his mind, admit there's nothing out there, and we're all on our own in a totally purposeless, amoral cosmos devoid of remorse or empathy for us. In fact, one major Torino 10 asteroid could obliterate us one time and nobody would be the wiser.

Thus, his argument that we "want nothing to do with God" is mere question begging since HE has not provided the logical basis (by way of any arguments) for us to see any condition to warrant god belief. His exercise of splitting "emotional" and "intellectual" problems is then merely a neat trick which exposes that he had to do so because he lacks the intellectual arguments to defend his position vis-a-vis the inherent intellectual problem for the inaction of a putatively all-good and powerful being. So, he must create the strawman of "emotional" problems!

"But in order to support my claim that suffering poses mainly an emotional problem , we need to examine in detail the intellectual problem to show that it fails as a proof of atheism . Now in discussing the intellectual problem of suffering , it's important that we keep in mind who has the burden of proof here . In past debates we were considering the arguments for God , and so it was the believer who had to bear the burden of proof . But NOW it's the atheist's turn . We're considering arguments FOR atheism . We want to hear from the atheist some arguments against God . "

Again, more question begging. The argument doesn't rest with the atheist, because he sees reality as godless, which explains perfectly why two innocents like Michaela and Hayley Petit could be so brutally set upon with no help from "above". Despite their pleas, prayers and entreaties- they received nothing! Thus, the onus is on the BELIEVER to account for this absence of action - even despite being prayed to for deliverance. The burden is clearly not on the atheist, because he makes no claim whatever that anything or anyone is out there to deliver anyone from evil.

It is the CHRISTIAN believer who makes this claim! He is the one who maintains that if one prays fervently then one can be delivered or saved.

So no, we need to hear or see the arguments from the believers as to why God didn't come to the rescue of innocents like the Petit girls and instead chose...to do nothing! (NOTE HERE: Mikey is seriously mistaken if he believes it requires a "moral judgment" to recognize or acknowledge another's suffering, and hence one must indirectly accept a God - who can "only make moral judgments". NO! Any imbecile who has the brain capacity to google the two Petit girls' names will instantly bring up the court documents, including the scenes of their burned beds, etc. One can process their suffering merely via having basic human empathy! One does not need to acknowledge a moral judgment or God to see the extent to which they suffered. Again, we see he lacks the basic wherewithal to even argue coherently!)

It is therefore the BELIEVERS' duty to explain this absence of action, for their God - or are they tacitly admitting they can't? It appears their question begging is precisely because they can't offer convincing explanations for their God's inaction!
More balderdash:

"So now it's the atheist who must shoulder the burden of proof . It's up to him to give us an argument leading to the conclusion "Therefore , God does not exist." Too often believers will allow atheists to shift the burden of proof to the believer's shoulder's . "

Again, idiocy! The burden of proof is on the claimant - the one who would add TO reality, not the conservative naturalist who sees no need to! It would be like a flying saucer- believer insisting it's the duty of the saucer denier to prove they don't exist, as opposed to saucer believers proving they do - or at least providing reasonable evidence. Or it would be like me demanding Mikey disprove (NO Bibles allowed!) advanced ETs exist with a flourishing civilization on the third planet of Zeta Reticuli, as opposed to me having to prove it to him.

It turns the entire evidentiary edifice on its head! Were we to allow the believer side to get away with this, what next? Bigfoot believers demanding we show proof it doesn't exist? Abominable Snowman believers doing the same? Fairy and leprechaun believers demanding we offer disproof of 4" high humans flying or bounding about the assorted gardens? Give me a break!

More hogwash from a guy at Densan IQ level:


"Give me some good explanation for why God permits suffering," the atheist will demand , and then sits back and plays the skeptic about all the believer's attempted explanations . The atheist winds up having to prove nothing . This may be clever debating strategy on the atheist's part , but it's philosophically illegitimate and intellectually dishonest . "

No, it's totally legitimate because the atheist CLAIMS nothing! The atheist makes no claim as to some ultimate purposeful cosmos bearing an all -powerful being (who yet can't come to the aid of its children when they need it) as does the believer. The latter insists we accept that there's really REALLY an ALL POWERFUL, ALL GOOD force out there- watching over everything - yet he punks out and refuses to explain why it won't consistently act for innocents! The atheist simply asks: IF it is out there, and IS all Good and ALL powerful, why does it choose not to act on behalf of innocents? Thus, the philosophical and intellectual burden is clearly on the one who makes the claim an all -Good and all -powerful entity exists! For if indeed it does, the least attribute we must expect is efficacy: the capacity to act when called upon. This is the minimum standard to expect- that of a loving, caring human parent - who would surely not leave her kids screaming in a burning house without at least trying to effect a rescue.

Again, the believer has the burden of explanation, not the atheist. It is tragic believers are in this "unfair" position, but HEY - THEY are the ones claiming the benediction and existence of an Almighty! So why does it not act on behalf of innocents? Like the two Petit girls, or the 6 million Jews butchered in Nazi gas chambers? Or the 800,000 Tutsi Rwandans butchered by the Hutu tribe in Rwanda in 1994?

Atheists don't have the obligation to explain the inaction of the Christian deity - since they don't accept its existence. Rather its sponsors (believers and apologists) DO! If they choose to run from this duty then it shows us they stand on no true beliefs at all, and indeed, are incapable of arguing for their deity's existence when it most counts. It tells us their faith is built on quicksand! Worse, they are punks and cowards because instead of committing to the task at hand they cower, run and hide behind strawmen, red herrings and assorted other excuses to fob off what THEY need to do, onto atheists.
Again, let's be absolutely clear on this: the atheist need prove nothing because he claims nothing! That's the way it works! The burden is always upon the CLAIMANT not the skeptic! You have to undertake the job of proving when you make an extraordinary claim, like saying an infinitely powerful, all loving Being exists yet can't or won't act when it's most needed. If you don't like those odds, or that deal, then it's simple: RETRACT YOUR CLAIM!!!

"So , my friends , don't allow the atheist to shirk his intellectual responsibilities . Remember , he's the one who claims the coexistence of God and suffering is impossible or improbable . So it's up to him to give us his argument and to support his premises . It's the Christian's turn to play the skeptic and question whether the atheist has shown that God cannot have or does not have a good reason for permitting suffering "

The problem, my dense bro, is that the Christian can't have it both ways: both skeptic and believer.

IF you believe in this all powerful and all good force (infinite besides) you cannot shirk your duty in the next breath and disown YOUR responsibility to account for its inaction on behalf of innocents who are suffering. It is NOT OUR JOB to do YOURS for you! (E.g. explaining why God would have any reason to permit suffering to occur when we don't even accept a God exists!) We know it's hard and we sympathize with your plight- but that's the wicket YOU chose to defend, not us! Maybe next time choose your beliefs (or at least the attributes of your God) more judiciously, eh bro? Maybe do like my friend John Phillips and scale back your deity to the Socinian God - who is limited in time and space and never knows more than the most advanced sentient life form (in this case, humans- if Mikey's gospel that there are no aliens is to be believed). Thus, it is NOT all -knowing, infinite, or all-powerful! That is your only way out, short of disbelieving entirely! DEAL WITH IT, PORK CHOP!

Maybe - just maybe- if defending your entity is so damned hard that you have to try to worm your way out with verbal subterfuge and tricks, you need to reconsider seriously its existence - just as former fundie Bart D. Ehrman did!
Posted by Copernicus at 11:19 AM