More Moron Ignorance from a Lisle Apologist- So what’s new? 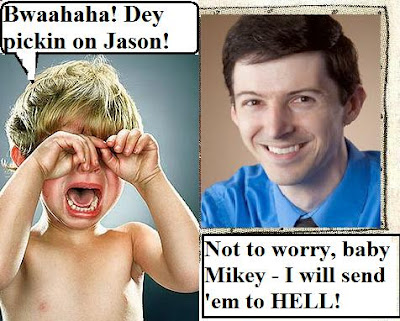 Poor little Pastor Mikey is all exercised and whiny in his pastor diapers because I skewered Jason Lisle’s tripe in earlier blogs – both his specious use of astrophysics (his own version) to support the “ancient starlight paradox” (which makes me wonder what exactly he had to DO to get his Ph.D.) and also exposing his irrational attacks on atheism – wherein I showed paragraph by paragraph how Lisle himself violated basic logical rules, as already noted by another professional who has encountered this pompous piece of religious pus….errrr rather a putz:

as the blog writer puts it:

“Of course they, and especially Jason Lisle, will not ever deal with the substance of an argument. They will instead whine that they've been called mean names and run away. That's what they do.

OK, so far you're saying this isn't very funny. Lisle is a drab, boring writer with one rhetorical trick in his book that he plays over and over"

And I pointed this out to in my blog taking Lisle down for his specious invocation of “fallacies” and "rules of logic" to try to attack atheism:

But rather than deal with my arguments, little Pastor Perplex, as is his wont, reaches for the spurious accusations, misrepresentations and outright bogus assumptions.
For example, the idiot writes (when he could have easily googled my full name to ascertain his assumptions were wrong):

“Or , it could also be that the only book or two that our atheist friend published was through Author Solutions publishing , where individual authors can self-publish, promote, and sell their books ( http://www.authorsolutions.com/ ) .”

Which is so far off the beam it'd be laughable, if he hadn't intended it as an insult. In fact I have now published six books, and all done via e-publishing companies (e.g. lulu.com). For example, in lulu.com one pays only actual publishing costs if one wants an actual book copy - and one receives up to 20% on the sale of all purchased books. Buyers have the choice of purchasing an e-book edition or a paperback or hardcover one, at about 50% higher cost.

There are no “hundreds of dollars” paid up front because it isn’t necessary! The reason is simple: In e-publishing, the company only publishes the books needed or actually sold (online) and no extra books are generated with accompanying waste. In this way, overhead is dramatically lowered, and hundreds of books don’t pile up in one’s garage. It is the most efficient process now going in book publishing (as a recent Financial Times piece noted), and is actually beating the brick and mortar book publishers at their own game –which is why so many have gone belly up with losses. (Mainly because they lost by producing larger runs than they could sell, so on account of limited storage space must have most "remaindered" -meaning sold barely above cost. Recent Example: Sarah Palin's new book!) In addition, with e-publishing one keeps a much larger percentage of the royalties, while in standard book publishing it's usually 15% or less.

My other original book, The Atheist Handbook to Modern Materialism, was published and sold by the American Atheist Press. All of this could have been learned with even minor effort – saving him much blog space (posting comments from people about his ‘Author’s solutions’ nonsense) - but being an inveterate brat who supposes one day he’ll be a great televangelist, it’s easier to cast aspersions than do practical research. (showing even when he googles he doesn’t really know how to google).

The numbskull goes on to blather:

“Two of the books that Dr. Lisle has written are Taking Back Astronomy, The Ultimate Proof of Creation, and Old-Earth Creationism on Trial. Both are published by New Leaf Publishing Group/Master Books……Well , a CHRISTIAN book publishing company . Hmmm , interesting . Could THAT be the reason this atheist in question also feels the need to denigrate and disrepect Dr. Lilse?”

Actually close to the mark, bonehead. Because IF he was writing about real astronomy he’d have published his works in academic presses like Kluwer or Springer-Verlag, or Harvard University books. At the very least, he'd publish his ideas at an independent e-publisher like lulu.com as opposed to having his work supported by diehard bible punchers who have a narrow, unscientific agenda. The very fact he publishes under a Christian outfit shows he is not publishing science as it is accepted in the professional, scientific world.

I mean, why would a supposed “astrophysicist” publish anything by way of a Christian book company if not to promote a Christian world view by deforming the science toward that end. (And in my blog: http://brane-space.blogspot.com/2010/12/more-insane-codswallop-from.html - I showed the extensive ways Lisle distorts astrophysics to his own ends. THIS is why he merits “disrespect” because as P.Z. Myers notes, he’s nothing more than a con man, conning people to accept his specious religious bunkum by exploiting his past scientific work and credentials.

“But aside from all that - it seems the modus operandi of this particular atheist is to attempt to discredit ANYONE , regardless of their academic credentials , if they even remotely profess belief in God .”

Hardly! In fact, my academic advisor (Prof. A. Achong) while at the University of the West Indies was a strong Christian fundamentalist and “born again” believer. However, he never ever ever let his beliefs impinge and impact whatever science he was doing, including a set of papers in solar physics on solar Type III radio bursts and their harmonics. In other words, you wouldn’t catch Dr. Achong claiming a “young Sun”, writing on it, or trying to pass such speculations off in books published by a Christian Publisher.

IF he did believe some branch of science supported his views, he'd publish his conjectures either electronically, via an e-publisher, or use an independent academic press that might be open to printing such speculations. But he wouldn't be so blatantly doctrinnaire as to publish under some outright Christian imprimatur.


Then we behold him turning pseudo-gracious:

Note his putting higher education and knowledgeable in scare quotes, which of course, controverts his claim he’s "not really saying” that one’s higher education doesn’t make them knowledgeable in a particular discipline. So, we see he doesn’t really mean it. His attempt here is to obviously disparage my education, never mind it exceeds his by several thousand million light years. I mean, has he produced a 400 page thesis (Lisle's on the solar granulation was 210 pp by comparison, and we know that in the U.S. academic setting it is the advisor who suggests or gives the project - while in the British system one must conceive it himself with zero assistance!). Has he even taken the GRE yet? Has he even taken an SAT? What did he score?

Then we have this indignant babble:

"But my point is , that this atheist is so arrogant that he literally sees himself as a "god" in his own mind . I mean , according to him , there is NO subject that he isn't an "expert" on !”

Actually, there are dozens of subjects I'm not an expert on, including: heart and brain surgery - or any surgery, engineering of missile radar systems or missile gyroscopic systems, architecture, automobile design, nuclear plant design and construction, repair and maintenance of sewer and water mains, meteorological forecasting, design of hydraulic lifts... and dozens of others.

What this bozo is REALLY objecting to is the fact I can blog on dozens more subjects than he does. Does that mean I know all there is to know about them? Noooooooo..... It does mean that I take the time to educate myself about them, enough to write on them. Just as he could - IF he spent half as much time looking up ancient bible quotes and confining attention only to what one or other ancient sheep herder scribbled over 2,000 year ago.

So, no, there are many subjects I'm not an expert on. However, given I've had the benefit of an advanced education - unlike him - I know I can use that same academic training and accessory resources (such as available in scholarly libraries online, and journals from scientific societies) to learn anything (without having to google) if I put my mind to it. (Especially as I don't waste that mind buried in ancient drivel that has zero relevance now).

As for being “arrogant”, not at all! I only seek truth and have next to zero patience with those who try to distort it by false claims, fallacious logic, pseudo-science or deliberate distortions as this Pastor's pet blabbermouth has done to promote his God-swallop. Maybe if he stood back, collected his pathetic thoughts, he might actually be able to rebut my arguments against Lisle’s claims – instead of taking cheap shots at me- which include an unseemly jealousy over my academic attainments and diverse background. But what can one expect from a guy who’s paying $165 per credit hour for a bible degree that will have about as much worth as Lisle’s Ph.D. by the time Lisle finishes writing two more Christian books on a Young Sun, or 6,000 -year old universe. I mean the guy is already a laughing stock among solar physics and other science professionals.
Posted by Copernicus at 8:56 AM