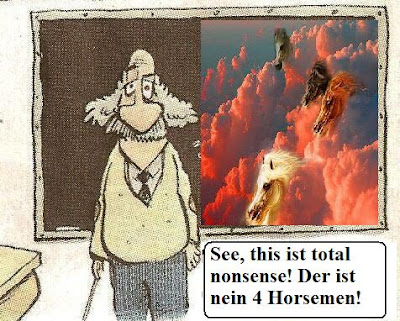 It seems as complex and sophisticated as the human brain is, it has major defects and entrenched delusional tendencies that never seem to be tempered. Even the application of logic seems not to phase people whose brains have been infected by hyper-godism. Then THEY have the absolute gall to castigate us (skeptics, unbelievers) as the defective ones! They talk or write balderdash like the "natural Man can only think in natural terms" - as if they've proven the supernatural exists outside of their fictional books...or hallucinating brains.

As we also know, these twits never cease to give predictions concerning a supposed apocalyptic end. Hal Lindsey was bitten on the ass by his aggressive prediction (in his book:The Late, Great Planet Earth) that the Antichrist would begin his Tribulation in 1988. It never happened. In a 1991 Larry King Live episode, meanwhile, a diehard evangelical named Rev. R.L. Heimers of the Fundamentalist Baptist Tabernacle Church refused to give skeptic James Randi his end time prediction, though he kept repeating over and over "it's coming in our lifetimes". Randi, bemused, was quite correct to press him on exactly WHEN. When the minister couldn't or wouldn't deliver, Randi essentially laughed him off, averring anyone can say anything but if there' s no fixed or definite prediction it means nothing.

Well at least now some odd group of god-mongering believers seems to have gone out on a limb at:

"WE CAN KNOW from the Bible alone that the date of the rapture of believers will take place on May 21, 2011 and that God will destroy this world on October 21, 2011"

Evidently, to arrive at this codswallop they use some obscure counting method from the date of Noah's ark (already known to be mythical as I showed, e.g. http://brane-space.blogspot.com/2010/11/can-fundies-be-this-physics-illiterate.html )

But, as usual, these morons will be proven wrong - just as wrong as Hal Lindsey was with his earlier foolishness. Why do they succumb time and time again, showing themselves clueless and hopeless when it comes to one nanobyte of intelligence?

Biblical scholar Bart D. Ehrman in his recent book: God's Problem- How the Bible Fails to Answer Our Most Important Questions, seems to have at least some semblance of an explanation (although I will offer another one later). According to Ehrman, who basically asks 'Why is it some people (e.g. apocalyticists) can't help themselves and always go off with these inane predictions?' - the reason is that "the power of sin has overwhelmed them". In addition to this, they are overwhelmed by poppycock as regards death. As Ehrman elaborates (p. 216):

"Sin is actually a power, a kind of demonic force, that is trying to enslave people, and to force them to do what is contrary to their own interests... So too death is not simply something that happens when our bodies cease to function, it is a demonic power in the world that is trying to capture us".

No wonder then, these brain-impaired people read too much into either one. As we know from the rationalist's perspective, "sin" is merely a result of the disparity of conscious perception between the neocortex (and its abstract language capablities) and the lower brain centers. Because the former is able to perceive atavistic drives, actions and tendencies in the latter, it calls the inevitable gap, "sin". See, the neocortex is the part of the brain able to fancy or ideate perfection whether via conduct or through the "salvation" meme. The lower brain based in the reticular formation (especially amygdala) and the limbic system, is unable to do that. Not a surprise since it evolved first from our common ape ancestors.

Death also suffers from this, while we rationalists simply see it as wholly natural. To the religous obsessive, death is IT - the time of ultimate decision for entering forever heaven or eternal hell. Hence, the obsession of these lamebrains with passing time ....or running out of time...'tick, tick, tick' or whatnot. The truth, of course, is that everyone's life's clock is running out. Once it expires, that's it - finito - we're all worm food. The mature person deals with that, the immature infant (like the Santa believer) refuses to.

Ehrman points out the underpinning for both these outlooks (ibid.):

But these folks who succumb to this simplistic horse manure, aren't even bright enough to realize said beliefs aren't even original! The concept of a totally bipolar universe, divided between light and darkness, flesh and spirit, evil and good, Devil and Deity was originally confected compliments of the ancient Manicheans and their founder Mani, b. 219 BCE. In the Manichean perspective, also, everything was invested with Good v. Evil import. Hell, you couldn't even take a crap without some Manichean divining whether it was a "Good" or "evil" output!

Less well known, is that most Manicheans were absolutely against ANY form of birth. They believed that the human was essentially a spark of deistic light locked within a body fashioned by 'Satan'. Hence, enabling birth, was in effect tantamount to multiplying the total of diabolically imprisoned 'sparks' in the world. Since there was never any assurance these sparks could be liberated, it was paramount that the diabolical flesh be prevented from reproducing itself. Females figured into this, and came to be regarded as 'vessels of the Devil' - since it was within their wombs that the devilish flesh sprouted.

Trouble is, this devilish flesh did reproduce, and reproduce and reproduce. Faced with an onslaught of flesh-encased pseudo-demons, the Manicheans had to try to find a way out.

How did the seed of Mani make it into Christianity? Well, St. Augustine was originally a Manichean, and when he converted to Christianity in 387 CE, he brought all his old Good vs. Evil, God vs. Devil baggage with him. The problem is that the Church never sorted it out, and indeed, even today, Manichean thought poisons and contaminates its teachings to do with sex or what it deems "sexual aberrations". Almost to a one (fornication, masturbation, etc.), they're all designated "mortal sins" when no one is being murdered, raped or maimed! But the fruit of Mani declares that all sexual transgressions, since they entail actions of the "devilish flesh" be awarded the highest gravity and hence, punishment.

Now, interestingly, though the Evangelical Protestants (who basically all broke away from Catholicism with Martin Luther, in the 16th century) fancy themselves the sole "true Christians" (since they don't buy into Catholic "mythology" like Mary- Blessed Virgin, Purgatory or the papacy) they yet buy into worse nonsense since they have tacitly accepted the underpinnings of Augustinian Manicheanism!

Every time they allude to "demonic forces", or someone - another human being "used by the Devil" or "doing Satan's work" they are unwittingly channeling the words and thoughts of Mani. "But it's all in the scriptures!" They yelp. Of course, since many of the early scribes and copyists were Manicheans!

Now what about Apocalypticism? How or why did it gain such a foothold? My theory, from what I've studied about it and also from exegetical analysis of the Book of Daniel, and Revelation (while at Loyola) is that it was developed as a form of "instant spiritual evolution" - to throw off all demonic encumbrances by a single epochal event or a process. (Note: the Rapture wasn't part of this process originally. It was instead concocted in 19th century Scotland - from a young girl's febrile visions - then formulated into a half-cocked doctrine by a Scottish Minister, J. Darby).

This instant spiritual evolution stands on two foundation stones: 1) the utter demolition of the "evil side" of humanity, thus releasing only the noble or "Good" side, and 2) the emergence of only one (Good) universe, to last forever.

The placemarker (1) required a "salvation" doctrine, so that was developed - actually plagiarized - from earlier pagan God -man myths, such as Horus and Mithra. The place marker (2) required a Second Coming of Jesus to validate the new, godly universe.

The trouble is neither of these is supported. We know (1) is based on wholesale plagiarism of pagan texts, as from the Mithraist Zendavesta, while (2) was predicated on simple wishful thinking. It was Oxford scholar Geza Vermes who first pointed out (The Authentic Gospel of Jesus) the final settling for a Second Coming was driven largely by a realization that the parousia wouldn't be likely to arrive in Christians' then lifetimes, if at all. So the hope of seeing Christ again was substituted for the reality. That hope is kept stoked precisely by the apocalypticism that also drives the "salvation" mythology.

The scriptural references themselves are not to be trusted, since The NT- as Vermes notes, is littered with the preconceptions, false assumptions and misplaced theological influences of the various writers – indeed, Vermes meticulously points these out almost passage for passage in his text. There is also a profound circularity or self-reference which can be seen with even a casual inspection of the alleged apocalyptic books. This circularity abounds with examples of sayings (attributed to Christ) that actually manifest from others, since the exegetical textual bases diverge. (Many clues in the original language points to such divergence and in addition, multiple sources have observed that much of the biographic material of the New Testament is merely a reworking of material taken from the Greek Old Testament, the Septuagint.)

The many logia recounted in the Gospels would, if they could convincingly be shown derived from a single personality or source, be strong evidence that a historical Jesus-as- Savior existed. But such is not the case, and it is only the fundagelicals' aptitude for singular unreason and denial that makes it otherwise. A pity - but one likely explanation why reason no longer works, is because the process of reason split into Platonic and Socratic approaches, with atheists more likely to use the latter (e.g. examination of evidence with the potential to IN-validate, as well as validate, and question every single aspect)

While Yeshua was probably a historical person, therefore, there is absolutely no genuine compelling historical evidence he was anything more than that, or that there'll be some "Second coming" or new world-universe emergent. All efforts to inflate the base history, are merely sundry dubious authors adding confections to support a myth. A key giveaway are the alleged "son of God" sayings attributed to Christ. As Vermes notes, e.g. in Matt. 14:33, these insertions appear from the same timeline event in Mark. This also would explain the legendary addition of an anomalous 'son of God' saying in Matthew that does not appear in Mark, nor indeed anywhere else in the synoptics - unless one includes epithets by "demons" or the chief priests, as Vermes observes, since Yeshua never EVER made such allusions to himself, it was always the "Son of Man" NOT the "Son of God".

"I have to admit that the apocalyptic view is based on mythological ideas that I simply cannot accept. For ancient thinkers, like the writers of the Bible, the very notion of what would happen at the end of the age was predicated on an understanding of the world as a three-storied universe in wich God above had relinquished control of earth down here but would soon come down and bring the world above to our world below. But there is no God 'up there', just above the sky, waiting to come 'down' here or to take us 'up' there".

Here, Ehrman encapsulates the childish fairy story that is not only embodied in the (totally unscriptural) Rapture nonsense but "the Second Coming". It is something that won't go away anytime soon either, no matter how much reason we skeptics bring to bear.

But more on this when I do my blog on "the God in the Brain".
Posted by Copernicus at 1:53 PM