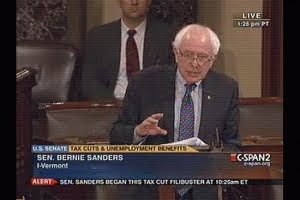 
As fellow blogger Brent Budowsky put it in a brilliant rant yesterday on the abandonment of the 99ers (those unemployed who've been 99 weeks on unemployment benefits and stand to be cut off at the knees while fatass billionaires stand to collect over a billion each in tax cuts from this new "Tax deal"):

“Jesus said the last shall be first, and the first shall be last. Washington says that the wealthiest among us should get a huge Christmas tax cut, while the most hurting among us who have been jobless for more than 99 weeks should be left out in the cold. Ed Schultz (MSNBC Host for the Ed Schultz Show) says this is dead wrong. Ed Schultz is right.

It is immoral for a great nation to allow men and women to be jobless for 99 weeks and then tell them: Drop dead. Go hungry. Be homeless. Freeze in the cold. The nation of huge Wall Street bonuses and giant tax cuts for the wealthy must not refuse to help those who have been jobless for more than 99 weeks.”


Amidst all this, one lone Senator – the genuine article not a cheap knock-off, and hero as well as Socialist: Sen. Bernie Sanders, stood in the Well of the Senate Floor yesterday for nearly eight and a half hours and did a de facto filibuster, expatiating on the path to economic disaster of this nation. He left no stone of history unturned as he churned through nearly four decades of how our country has been sacrificed on the altar of corporate mammon by our elected representatives.

Going from the repeated gifts and bailouts of Wall Street, to the pathetic trade policy and corporate selloff of jobs overseas, then to the recent credit markets and financial meltdown, Sanders provided a thorough education to anyone who would pay attention. (Note: only a few other Senators remained in the chamber to spell him, and no Repubs.)

Sanders' arc of recent economic history showed the free market-worshipping, Neoliberal ascent, with our glorious reps mostly acting only at the behest of their re-election as they’ve forgotten or dismissed the rest of us – the little people- to gain corporate money to rise to their thrones. The Dems as well as the Republicans feeding at the trough of corporate wealth to extend their respective campaigns, and at enormous cost to the rest of us - as they replaced fighting for the little guys with fighting for the Big Business parasites.

As a fellow Socialist (member of the Democratic Socialists of America) I am truly proud of Sen. Sanders for delivering a needed rant on the state of this country, and how it’s been taken over by big business and monied interests. Sen. Sanders specifically zeroed in on Barack Obama’s tax deal with Republicans — a proposal he called “Robin Hood in reverse.” (Many may not be aware of this, but as reported in The Huffington Post, those earning under $40,000/year will actually see a tax hike if this misbegotten legislation goes through. Meanwhile, the Walton family - owners of the Walmart Empire- will receive a $36.7 billion tax cut gift)

While delivering this epic rant, Sanders also coincidentally showed what a REAL filibuster looks like in this age of political pussification. As I recall, and Sanders showed, in the old days – when most of today’s pols weren’t even born yet- one had to actually get out and stand for HOURS on the Senate floor, telephone book or bible in hand and keep on reading to hold the floor and block legislation. You couldn’t just write a little note and hand it to the Senate President and offer an “intent to filbuster’. You’d be laughed out of the chamber.

As I’ve repeatedly said, if the old time filibuster rules were in force you’d not see any of this easy pseudo-filibustering disrupting so much legislation. You wouldn’t because there’d be a cost in time and energy to do it. Filbustering is now common precisely because it’s done on the cheap. Make it an actual physical endurance contest, like it used to be (and Sanders showed, though technically he did not filibuster since no legislation was held up) Make the would be filbusterer get his ass out on the floor and do it, then you’d see a halt to this foolishness we have now.


But, back to Sen. Sanders. He had no choice but to keep speaking — and remain standing — in order to hold the floor. He couldn’t eat but sipped occasionally from a glass of water. Throughout his speech, he never left the floor, even to go to the bathroom.

“You can call what I am doing today whatever you want,” Sanders said in his first hour. “You can call it a filibuster; you can call it a very long speech. I’m not here to set any great records or to make a spectacle. I am simply here today to take as long as I can to explain to the American people that we have got to do a lot better than this agreement provides.”

Sanders’ speech, shown live on CSPAN-2, generated attention nationwide thanks in part to his office’s use of Internet technology. Not only did his office live-stream the speech online, but staff members sent out numerous tweets using Twitter. As the day went on, that website showed Sanders’ speech to be one of its most popular trending topics, and the senator’s office’s use of the Twitter “hashtag” #filibernie allowed website visitors to see the flood of Sanders tweets at www.twitter.com/#filibernie.

Other video clips can be found at these links:

Sanders in his long speech exposed the corruption of money at the core of the American political system and explained why so little redounds to the benefit of the people. Equally important, Sanders showed what real Democrats were like and why most of the current lot merit only shame. But then most of the politicians today are mere shadows, or hollow people - unable or unwilling to act under their own courage to speak truth to power - corporate power. Instead they align themselves with corporate and business power against those whom they'd represent. Then they puzzle over why the trust in government is the lowest ever.

As a commentator in the letters section of salon.com so eloquently put it:

“We elected people to Congress to stabilize our economy; preserve the safety nets for people who need them now more than ever; to keep the American Dream alive for all; to restore our country to her vibrancy and dignity and her "exceptionalism"; and we said we would do our part.
What we have gotten from them is environmental pollution with toxic lies, slander, slurs, character defamation; disrespect of our "will" as expressed in elections; inaction in Congress and half assed action when they do act; increases in the deficit and decreases in revenue; and increasing threats to those safety nets that have been in place for years and years that are not the cause of financial failure but the easiest, most simplistic scapegoat of an answer.

There is something wrong with a plan that gives away the store in order to continue to extend a pittance unemployment check to the millions of working middle class who have lost their jobs and homes because of the sloppy way the institutions of this country do business and because the government has allowed them to be sloppy. There is something wrong with legislators who solve the problems with more of the same that caused the problems in the first place and who want us to believe that the only answer is to cut spending on social programs that keep our elderly and our children off the streets and in fairly good hands..."

So true, but it's a shame the power brokers and pols will ignore all of this, unless there's some way of it generating money for them or more leverage to their corporate paymasters.
Posted by Copernicus at 9:16 AM