Should Certain People Be Prohibited from being Pastors? 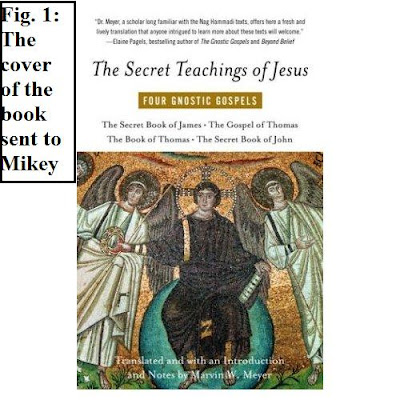 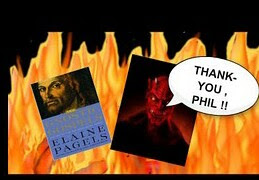 Accepting him at his word, not only could he not discriminate the book’s title or author from what was actually sent, but he also took it as “garbage” and (according to him) asked his son Dylan to take it out to the trash. Well, hopefully Dylan is smart and savvy enough to have ignored his pompous, blowhard bully of an old man – so kept the book for himself to explore another side of Christianity (from that presumably forced down his throat by his wannabe pastor pop). Tossing away or burning books is never a very civilized act- ask the Nazis who took great pride in it!

If Dylan did choose to ignore his "pastor" pop’s orders, he will profit mightily. Unlike pop, who I certainly underestimated in terms of even reading other expressions of the Christian message.

According to Mikey’s screwed up beliefs:

“The Gnostic gospels are writings by early "Christian" Gnostics. After the first century of Christianity, two primary divisions developed - the orthodox and the Gnostics. The orthodox Christians held to books we now have in the Bible and to what is today considered orthodox theology. The Gnostic "Christians," held a distinctly different view of the Bible, of Jesus Christ, of salvation, and of virtually every other major Christian doctrine. However, they did not have any writings by the Apostles to give legitimacy to their beliefs.”

Of course this is bogus palaver. The truth is that no one knew or had a single clue WHO wrote what, exactly! In the first instance, more than 40 years elapsed between the purported events in Galilee and environs and the preparation of the first scrolls. That’s a lot of time for memory to fade. All that time memory was fading for the “Orthodox”, however, the Gnostics at Nag Hammadi (Egypt) were documenting their beliefs about Yeshua and his teachings as THEY perceived them. Based on esoteric traditions, these teachings were that one didn't depend on an external Christ for salvation, rather one became a Christ in his own right. In this way, the Gnostics exhibited a remarkable resonance of beliefs with Buddhism -which teaches (previous blog) that Buddha-hood is accessible to all, not merely a select one or two.

Little known at the time is that they were massively persecuted and oppressed by the likes of Paul and some of his fellow orthodox cohorts. Some scholars believe many of the Gnostics were put to death by these bigots, so their own little fairy stories could prevail. And in fact that’s pretty well what happened. Unlike the primary fundie fairy tale that the Bible just magically appeared in its entirety one fine day in the Judean desert, the truth is a bit more brutal. It is actually a collection of 66 books assembled over a thousand years! Most of this assembly didn’t even occur until one or other council or synod or gathering had approved which books were to be accepted and which rejected (those rejected were generally termed “apocrypha”- meaning that according to the arbiters they didn’t possess a “seal of authenticity”)

Indeed, the meaning is not that simple – just as the origin of the Bible. Apocryphal then has various meanings, including "hidden", "esoteric", "spurious", "of questionable authenticity", and "Christian texts that are not canonical".

The general term is usually applied to the books that Protestant Christians considered useful but not divinely inspired. As such, it’s misleading to refer to the Gnostic writings as apocryphal, for example, because they’d not have been classified in the same category by orthodox believers. (Indeed they didn’t even EXIST when the determinations of divine inspiration were made- since they were only found at Nag Hammadi in the last century(1945)) It is amazing therefore, that for all the money Mikey is spending on his pastor education ($165 per credit hour) he wasn’t appraised of this. Bad teachers?
Meanwhile, Non-canonical books refers to traditional and extant texts (all of which far preceded the Nag Hammadi scrolls) of uncertain authenticity, or writings where the work was seriously questioned. Given that different denominations have different beliefs about what constitutes canonical scripture, there are several versions of the apocrypha, but I don’t want to get into that because it isn’t relevant here. What’s relevant is that NO one, not even Mikey, has the basis to reject the Gnostic gospels as “apocryphal”.

Mikey again, as clueless and uneducated as ever.

Well, here again he demonstrates his lack of insight – which he’d have actually obtained had he even taken the trouble to read Marvin Mayer’s Introductory Notes. Note that his use of the term “fraudulently” implies the Gnostics deliberately set out to hoodwink people by attaching names to the works that didn’t comport with the actual writers. However, research on all the 13 codices recovered discloses this wasn’t the case at all. And though the names may not represent the names of the actual authors – any more than the names attached to the Quadriforms do (most scholars see them as pseudonymous), it is the content that is most important.

Mikey is probably not even aware that the Gospel of John was actually an original Gnostic gospel (as Meyer notes). It was adopted by orthodoxy and then edited to fit its political/theological agenda. Anyone able to read Greek can see that heavy editing took place in the text of John. (A fact also pointed out by Yale Professor Dale B. Martin in his online course: Introduction to New Testament History and Literature.

Of particular import is his lecture: The Historical Jesus

Which clearly shows the editing in John to make it conform to orthodoxy.

Now, let’s think clearly here: If a group or person takes an original work and edits, remakes it into something that fits THEIR agenda, then that act is surely fraudulent! Hence, if anyone is being fraudulent here it is the early Church orthodoxy led by Paul, who sought to deform a Gnostic text in order to give credence to its God-Man agenda and beliefs.

Two other Yale lectures that are sure to help Mikey (way more than his costly bible college) are: Lecture 2 - From Stories to Canon:


And: The Gospel Of Thomas

Finally, my lame and clueless brother seems to have no clue that the Gnostic writings are based on much earlier teachings traced to a sect known as The Essenes- believed by many scholars to have been the primary source for nearly all Yeshua’s insights and esoteric teachings. (For those who don’t know, Yeshua taught secret or hidden truths, as well as more public ones – the latter usually given as easier-to -understand “parables” for the masses.)

The Gnostics themselves, as Meyer points out (p. xvii- Intro.) emphasized a quest for understanding, and because they placed more import on fostering spiritual lifestyles - as opposed to paying homage to the received wisdom of the authorities of the day, they were regarded as dissidents and outcasts. But let us remember, dear readers, this is exactly what Yeshua was regarded as! An outcast and a dangerous dissident! (As Oxford scholar Geza Vermes has noted, Yeshua was definitely regarded as a subversive by the Romans, and his assorted sermons often interpreted as appeals to insurrection- much like today's terrorists over the Net, appealing to all and sundry for "Jihad". It was this condemnation for subversive activity against Rome that ultimately cost him his life from crucifixion).

It's a pity that Mikey, whether he ever becomes a pastor or not, seems to have consigned to his dumpster the very work that might have rendered him more credible as a teacher, or preacher. But hey, maybe it’s just easier being a blowhard and officious windbag. Or a dishonest, dissembling cretin. Because it's clear he can read, so one can only conclude his deliberate misrepresentation of the book I sent to him, was for his own hateful purposes. (Most likely 'cause it suited his purpose to castigate as "Satan's own" a book with the title of 'The Gnostic Gospels' - as opposed to 'The Secret Teachings of Jesus'). So maybe we can conclude from this that poor little Pastor Perplex doesn't really want to listen or read what Jesus taught after all. Why should he? He proclaims in his blogs he's bringing "Christian love" to me and my Catholic sister and mom, but at the same time deigns to place our images -faces into his cartoon "Hell". What kind of "love" is that? Looks more like hate to me. (Especially when he adds that you know a gift or book is "tarnished if it comes from an atheist").

But at least Dylan (if he has more sense than his pop- as I believe he does) maybe hid the book away for future reference, and can read it at his leisure once he's able to escape Mike’s iron fist rule and mental slavery. One can at least hope.
Posted by Copernicus at 10:25 AM