Can this guy even make up his mind for once? 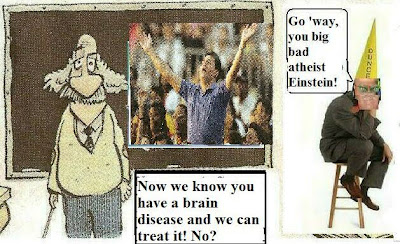 Now that the verdict is in, and "salvation -based" evangelicalism appears to be a brain-disease incepted by damage to both the frontal cortex and amygdala- we can better understand the insane screeds on "Hell" reeled off by these people. (And why we should also harbor some degree of sympathy for them).

We can also make allowance for certain disreputable tactics like one by Pastor Perplex, aka my fundie, bible-banging brain -damaged bro, who actually questioned whether Elizabeth Edwards (the recently deceased wife of Sen. John Edwards) was now "roasting in Hell". Unlike most normal humans who possess the social training and good manners to at least register a modicum of sympathy with a person's passing, this character doesn't let one freakin' day pass before he questions whether a recently dead person belonging to a group he hates (JWs, Mormons, Jews, Buddhists, Muslims, Eckists, Catholics, Atheists, other Christians not of the personal Savior shtick ) isn't roasting in his phantasmagoria of the mind.

Indeed, to ascertain the level of incoherence and brain damage one can dredge out his blog writings and see that he can't even make up his own mind as far as how or why people might end up in his infernal fantasy land.

"Of course , many of the unbelievers , especially the militant atheists , always spew their rhetoric about Christians "consigning" them to Hell . And , another "favorite" excuse they use for continuing in their unbelief is that they refuse to believe in a "God" who "sends His Creations to Hell for all eternity.

Of course , they're sadly mistaken on both counts . First of all , we ( Christians ) do not "consign" ANYONE to Hell ! Neither does God ! People send THEMSELVES to Hell !! "

Well, at least he's partly figured out an answer to the Hell-God paradox (how an infinite entity can allow a Hell when infinity means there's no place for any thing else). However, in his most recent blog questioning whether Elizabeth Edwards ended up there,

He scrawls this graffiti:

"So , I , for one , must ask , 'Did Mrs. Edwards get saved at the last nanosecond before her death by repenting of her sins , and asking The LORD's forgiveness and accepting Him as LORD and Savior?" If she DID , then she was indeed saved , and is now in heaven with The LORD

So now he changes his tune from his previous blog and says it's THE LORD'S JOB when he earlier said God consigns NO ONE to Hell! Does this joker even remember what he writes from day to day?

Maybe this is why he's yet unable to process biblical contradictions and errors, because his own brain won't allow or enable him the consistent language facility to do so!

Again, given the degenerate brain disease with which such guys are afflicted (Jim Jones, and Fred Phelps, also come to mind) we must have patience with such nuttiness and make allowances. I only bring these points up to show that if any of his followers are reading his blogs religiously, they'd be well to take any of them with a grain of proverbial salt.

Who knows? What he says in one blog will easily be contradicted in the next! Or, if you wait long enough some later blog content will contradict what he claimed was the "gospel truth" before.

As for Liz Edwards, let dead people be. Even a sickie ought to have the basic common sense to know when to leave well enough alone. Right now, her family merits all of our support, not be subject to sordid speculations on whether she's in Hell or not.

Besides, any god that would condemn this woman (and here we are taking Pastor Perplex at his recent word this IS the "Lord's job"(sic) ) isn't worth a cup of doggie lickspittle. And no one of any sanity, grace or sense would want to spend one millisecond with it! (Of course, this is all academic since it doesn't exist except as an invented artifact anyway).
Posted by Copernicus at 5:57 PM