Another Good Reason Not to Borrow more $ from the Chinese

BELOW: The Chinese Dongfeng 21D missile (carried atop a transport vehicle) which will upset the balance of power in the Southwest Pacific. Likely it was paid for using just the interest from money borrowed by the U.S. the past 10 years for two massive tax cuts and two undeclared wars. 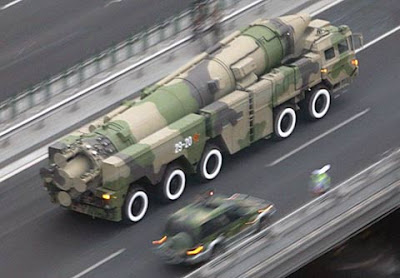 The news in this morning's Financial Times was not heartening or encouraging, but rather downright frightening. The article on the FT's front page described a "new Chinese anti-ship missile (see photo) which will significantly alter the balance of power in the Pacific". The worst news is that this missile, the Dongfeng 21D, is now operational.

U.S. Commander in the Pacific, Adm. Robert Willard, said this Chinese ballistic missile is designed to threaten U.S. aircraft carriers, and it confers on the Chinese the ability to project military power in Asia much sooner than expected. This has alerted the U.S. as well as other Pacific nations in Asia to an emerging Chinese naval power and formidable threat.

According to Andrew Erickson, a Chinese military expert at the U.S. Naval War College:

"So now we know...china's anti-ship ballistic missile is no longer aspirational"

Meaning it's no longer on the Chinese "wish list" but rather it'll only be a matter of months before its mounted and ready to offset the balance of power, maybe even if a crisis in Taiwan occurs. Other defense analysts have referred to the Dongfeng 21 D as a "game changer" since it has the capacity to discourage any entry of U.S. aircraft carriers into waters they may be needed.

So, IF there is a palpable threat to Taiwan by invading or intimidating Chinese forces, what then? Clearly, unless the U.S. comes up with an answer to the DF-21D (short of initiating a nuclear exchange with China) it will have to stand down.

The FT article notes the land-based DF-21D is designed to target aircraft carrier groups with the help of satellites, unmanned aerial vehicles and over the horizon radar. In September, Defense Secretary Robert Gates actually said this missile would force the U.S. to rethink the way its carriers are deployed.

The FT article goes on to note that most observers believe that China commenced production of the missile last year and meanwhile it is preparing a nuclear missile base in the southern city of Shaoguan for their deployment.

Conscious and concerned Americans may want to ask themselves where China is getting the moola for all this development and construction of advanced missile systems - including nuclear - that put the U.S. at a strategic disadvantage. Well, they need look no further than the juvenile mindset that dominates most of the U.S. population and rules congress, which asserts people can have their cake and eat it too. They can have benefits such as Social Security and Medicare and keep general taxes low at the same time!

That the U.S. can maintain a workable government, have a viable infrastructure yet sustain a tax rate that is the LOWEST in 60 years as a percentage of GDP.

And then they can look at the recent tax cuts package - which extends the Bush 'Zombie" tax cuts (which should have died on Jan. 1) another two years - at a cost of over $858 billion, nearly $500 billion of which will have to come via borrowing from the Chinese.

And just where or how, fellow Americans, do you think that paid- back money (with interest) will be spent? Well, on more weapons development! Merely considering the original $1 trillion borrowed (which the Chinese invested in T-bonds at 4%), e.g. to fund the Iraq and Afghan adventures. That interest yields $40 billion, or more than ample to fund the DF-21D development.

There are consequences to garnering tax cuts when you have to borrow the money from outside, foreign sources - and that is one. Another is that the infrastructure of our own nation will continue to crumble, all the while we track the rising DOW numbers like a pack of drooling idiots.
Posted by Copernicus at 9:10 AM