Can We Ever Stop the Warmongers? 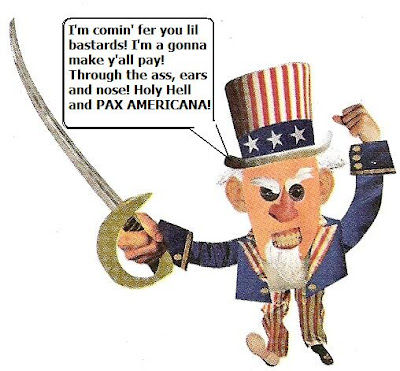 "Why of course the people don’t want war...But after all it is the leaders of the country who determine the policy, and it’s always a simple matter to drag the people along, whether it is a democracy or a fascist dictatorship ... Voice or no voice, the people can always be brought to the bidding of the leaders. That is easy. All you have to do is tell them they’re being attacked, and denounce the pacifists for lack of patriotism and exposing the country to danger.”


Today, December 7, is one of those days (along with Memorial Day) when the warmongers and bombastic jingoistics crawl out of the woodwork and sing the tunes of war again- to try to convince an already skeptical populace (more than half by most polls believe the Afghan excursion is a waste of money and lives). The shtick is usually simple enough: bang the drums loudly and proclaim how "honored" they were to serve in some militaristic capacity (they seldom say exactly how) and then blabber on about "God, Moms, and apple pies" demand every real American stand firm against any and all threats.

Trouble is, as JFK noted in his Pax Americana speech at American University in 1963, we don't have the money or the resources to do that! Given the exploding deficits of this country right now (with military spending consuming 55 cents of every yearly dollar of the national budget) , it's high time the U.S. cease pursuing ruinous policies of "Pax Americana" - in trying to force its will on other nations at the point of weapons of war

Now, this is certainly not to say there isn't a time for arms, or a call to arms. But emphatically NOT over every little two bit punk that rears his ugly head! When a putative "superpower" reacts by organizing its whole armaments control system to react to punks it elevates them to superpowers in their own right. The way to take down punk irritants (like the Somali pirates, or even al Qaeda) is not to be so stupid as to wage a budget- busting global war on them but to eliminate them via police powers. (For example, the Israelies dispatched nearly all the 1972 Munich Olympics terrorists by sending the Mossad after their and offing them one by one.)

The hard fact right now is that each new dollar approved for Afghanistan, if not paid by U.S. taxes in a pay-go modus operandi, will have to come from Chinese bankers. Already, they own $896 billion in U.S. debt in the form of treasurys. How long can this insanity continue? Not much longer.Either the U.S. must pull out of Afghanistan, acknowledging it can never accomplish what every other invading empire has failed to do in a territory (3 times the size of Iraq) of twenty distinct tribes, or it will spend itself into the same sovereign debt crisis as has Greece. And will likely have to go cap in hand to the IMF to have austerity measures imposed.

If we are planning to remain there until 2014, as Obama and NATO are indicating, then that means adding an additional estimated $680 billion to the already exploding budget deficit - now set to ramp up to $700 billion, merely by extending all the Bush tax cuts. And YES, those economic encumbrances DO matter to our national security! The reason is that to pay for them, we will likely have to sell bonds to Chinese bankers, or Russian or Saudi Bankers. Helloooo...anyone home? Anyone?

How did the American war state get going? How did we reach a state of almost perma-war, with one conflict succeeding another in rapid succession? It helps to gain a historical perspective. If one looks back at the document track, one can pretty well discern that the incentive to meddle in other nations’ affairs – as part of U.S. foreign policy – probably commenced with The National Security Council (NSC) Directive ‘NSC 10/2’ on June 18, 1948. A key element therein warned that all activities to be conducted against “hostile” foreign states – on in support of “friendly” ones, were to be executed so that “no U.S. Government responsibility would be evident to any unauthorized persons.” The provision also had to be included that if such activities were discovered “the U.S. Government can plausibly disclaim any responsibility for them.”

The scope of activities enumerated under the directive included: “propaganda, economic warfare, preventive direct action – including sabotage; subversion against hostile states including assistance to underground resistance movements, guerillas and refugee liberation groups and support of indigenous anti-Communist elements in threatened countries of the free world.”

Ratcheting up the effect, and consolidating the impetus to Empire- building was the document NSC-68, prepared by Paul Nitze of The National Security Council – completed by 1950. The document essentially contained the blueprint for unending strife and undeclared wars, all of which would be invoked on the basis of a zero tolerance threshold for foreigners’ misbehavior. The putative basis? To enable U.S. agitation, overthrow (or assassination) of democratically-elected leaders, and large and small occupations (ranging from the few thousand troops in the Dominican Republic in 1965, to more than 200,000 in Iraq by 2006.) The motivating force of the document was clear in this regard:“a defeat of free institutions anywhere is a defeat everywhere”.

In other words, a warmonger's wet dream. Any place for which the U.S. even remotely construed a “defeat of free institutions” gave it license to intervene at will. This critical aspect is described thusly by Morris Berman[1]:

“Nitze emphasized the importance of perception, arguing that how we were seen was as crucial as how militarily secure we actually were. This rapidly expanded the number of interests deemed relevant to national security”.

In other words, it provided the formula for unending war, and the building of Empire. Gore Vidal pinpoints the emergence of the American Empire when he notes[2]:

“Since 1950 the United States has fought perhaps a hundred overt and covert wars. None was declared by the nominal representatives of the American people in Congress…they had meekly turned over to the executive their principal great power to wage war. That was the end of that Constitution”.


The key point to note here is not only did the U.S. invoke a specious doctrine[3] to entitle it to engage in warfare wherever it deemed the “need” (e.g. Korea, Vietnam, Cambodia, Grenada, Nicaragua, Iraq, Afghanistan etc.) but also to take out democratically elected leaders where and when they threatened U.S. corporate interests, such as Premier Mohammed Mossadegh in Iran (1953)- threatened U.S. Oil interests, Jacobo Arbenz in Guatemala (1954)- threatened United Fruit Corp. by giving land to farmers, and Salvador Allende in Chile (1972)- strategic interests threatened.Even when specious doctrines weren't invoked, lies and deceptions often were in order to involve the U.S. in massive troop deployments and years of ruinous (to lives and treasure) military intrusions. For example, LBJ employed the ruse of the North Vietnamese firing on the Maddox and Turner Joy in international waters in August, 1964 as the basis to ramp up the Vietnam War. Similarly, Bush and Cheney employed the ruse that Saddam had "WMD" to justify Operation "Iraqi Freedom" (a bogus name if ever there was one) and invade Iraq - which had not one damned thing to do with 9/11. (Though the numbskulls who watched FAUX News would argue with that!)

Meanwhile, at last count, the estimates of the total of Iraqi civilians killed (by the World Health Organization) exceed 600,000. And in Afghanistan the body count continues to grow each day – ranging from ordinary civilians slain in misplaced gunfire on the streets of Kandahar to wedding parties obliterated by remote drones. As with Vietnam, when so many innocents were butchered and others' saw crops destroyed by Agent Orange, this does not win hearts and minds. Rather, those hearts and minds side with the enemy when the mighty power isn’t around.

But why be amazed that our representatives voted for this atrocity, any more than that they voted for the misguided Patriot Act (in 2002), or the Military Commissions Act in 2006 which repeals habeas corpus, or voted for nearly $200 billion to assemble 130,000 troops for a "mini-surge" in Afghanistan? Do freedoms, real ones, matter any more? How can they when the most despicable provisions of the Patriot Act – due for expiry in February, 2010, were re-approved by the Senate earlier this year? To remind readers, these provisions include allowances for “black bag” searches of one’s home and papers without any consent or knowledge- in total and direct violation of the Fourth Amendment of the Bill of Rights. (But since 83% of the country can't name 6 of the Bill of Rights, maybe they don't even matter any more!)

The sad and inescapable fact is that we won't be able to stop either the warmongers or the excesses of the Military-Industrial Complex until and unless we cease to glorify war. The sure sign of that cessation will arrive when the majority of people extend as many 'huzzahs' and kudos to self-effacing, lonely Peace Corps or Americorps volunteers, as they do for the camouflage-clad, armor wearing, gun toting Marine or Green Beret.

Yes, we know the "lizard brain" still dominates in most of humanity, but that doesn't mean we must give it license to govern and rule our lives - including allowing our whole domestic infrastructure to deteriorate to ruin, while we engage in ever more unprovoked wars, and build new war toys (like the F-35) .

[3] Of course, the ignominious “Bush Doctrine” – crafted under the auspices of the 2002 National Security Strategy – was even more noisome and outrageous, allowing for pre-emptive war as it made Iraq the gold standard for precedence. See: Berman, op. cit., p. 203.
Posted by Copernicus at 2:01 PM