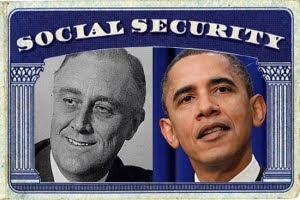 I've already lamented the huge down the road cost of this Obama-Repub tax deal - adding nearly $1 trillion to the deficit, and most of that money having to be borrowed from Chinese, Saudi and Russian bankers. I also noted that if the deficit is as parlous and inimicable to this nation's future fiscal health as claimed (including by Obama in previous remarks) it makes zero sense to add nearly 7% to that deficit for a near-term "fix" that makes our country's long term survival dubious. Are we in that much of a rush to join the formal ranks of third world nations?

Another very nasty aspect of this whole package, which has received less attention, is the two -year payroll tax "holiday" in the sense the FICA withholding will be sliced down to 10.4% from its current 12.4% for TWO years. Be mindful here that it is precisely this payroll tax that pays the freight for Social Security and in fact, keeps it fiscally secure. Readers should also be aware that one alternative solution to the draconian cuts proposed by Obama's Deficit Commission is precisely to raise the level of the payroll tax - say to cover the first $500,000 of income, rather than $110,000 or so. In this sense, cutting the payroll tax for two whole years makes it quite probable that much more draconian cuts will be called for in the near future - just as millions of baby boomers are getting ready to collect.


The obvious question here is: Why deprive Social Security of its stream of input income exactly when the meme is circulating that it's underfunded? Indeed, to add ammunition to that meme, we learned in the past year that Social Security paid out more than it took in (via payroll taxes) because so many 62 years olds opted to collect their S.S. monies early - since they were unable to find jobs or sustain their unemployment benefits. (Incidentally, this is a side cost of denying unemployment benefits extensions - say to the "99ers". )

What has been disturbing is to see even liberal pundits pooh-pooh the issue as much ado about nothing. Case in point, Ezra Klein of The Washington Post, the other night on Keith Olbermann's Countdown. Klein made light of the 2% cut in payroll tax, saying that it's merely an "accounting gimmick" anyway - and oh by the way - there were no actual Trust Funds behind Social Security funding, no real bonds. The government (Treasury) just moves money around into and out of general revenues as it sees fit.

It is sad that even someone like Klein could or would buy into this disinformation, but there it is. It shows how the Right Think tanks - like the American Enterprise Institute and Amercan Heritage Foundation have succeeded in confusing even the pundits and news people about the issue. It stands to reason then many millions of Americans would be confused, as they are about global warming.

The true fact is that there are special Social Security Trust Fund bonds which are currently earning from 2-3.5% interest each year. These bonds are funded, again, by payroll taxes input into the system. They are used, essentially, to keep paying benefits and it is these bonds which must be sustained at all costs, including their future funding.

the corporate media and think tanks that often feed their stories into its op-ed pages, continue efforts to brainwash Americans with drivel and propaganda, this time on the value of the "IOUs" (actually Treasury bonds) the government has issued as it has raided Social Security monies. According to a front page report appearing in today's local paper, 2010 marks the first time since 1983 the U.S. Government will have to pay out more: $29 billion, than it takes in from Social Security.

Further, the Right think tanks and the complicit corporo-media have been blathering that "$2.5 trillion in IOUs are stuffed into safes" as government securities, in Parkersburg, WVa. The argument implicit in the report is that the IOUs are essentially worthless and that the government will have to borrow even more money in order to redeem any of them.

In other words, no true bonds exist, only promises - which are assumed to be empty.

The reporters who file such stories either don't know or don't care that not paying on those government bonds would send this country hurtling into such an economic catastrophe from which it would never get out. One which would make the 2008 market meltdown from credit default swaps look like a walk in the park, and take most of the world with it.

It would be an economic holocaust, compounding the existing dollar value debacle that these reckless miscreants have allowed. Right now, bond holders trust in the "full faith and credit" of the U.S. government, is the only thin veneer left in justifying why they continue to hold U.S. T-bonds. If that is flagrantly ignored and the bonds not repaid, the whole global bond system would collapse overnight. Never mind the bonds in which the SS Trust Funds are invested are not the same as the others (Treasuries) that many foreigners hold.

In most foreigners minds' there isn’t an iota of difference, and wagging one's tongue all day long trying to explain any will merely drain the claimant of his energy and voice. As my Swiss friend Rolf has noted, "if the U.S. government reneged on paying out those SS bonds, the Swiss would interpret this as meaning that 'full faith and credit' in any U.S. financial instruments could no longer be counted on" . In his words, from an e-mail in 2002 - after the former Treasury Secretary (O'Neill) averred the SS Trust Funds contained no real money:

"If they let that happen to their own people, what's stopping them from doing it to foreign bond holders? Nothing! What kind of demonstration is that of full faith and credit? None! At least here in Switzerland we believe it a terrible omen and message to send the international bond community. If you renege on your own people, you can certainly do it to us. So why should we not cash in our bonds when the Social Security betrayal of American citizens arrives?"

What would follow would be a mass withdrawal from all securities: treasurys, monies invested, and by not only Switzerland but all EU nations, and most likely Japan and China too. Talks with other foreign friends involved in global investment and finance, from Germany and the UK, essentially echo Rolf's perceptions. They make no distinction between rescinding on SS bonds (which yes, they believe are real and exist) and other bonds they may hold.

What are the solutions? Are they as draconian as some claim? No, they're not - but they all would mean congress critters having to get off their butts and act- in some cases for politically unpopular changes. Some of those - which would not require raising the retirement age to receive full benefits (which I and many others regard as unfair and off the table) include:

- Raising the FICA limit to at least $500,000. In other words garner additional SS monies by raising this threshold - obviously on higher earners. (Who, from recent reports in the WSJ, are now back to buying their Porsches, Lamborghinis, and yachts. If they can afford those, they can afford to assist a national social insurance program that will preserve more peace and tranquility for them to go about their business, than anything else)

- Enforce the Budget Enforcement Act of 1991 which incorporates a "lockbox" provision it, to force congress to desist from all future raids on Social Security - for general revenues. (For more on this little known provision and act, see Michael Hiltzik's: The Plot to Kill Social Security.

At the very least, if this misbegotten payroll "tax decrease" of 2% goes through (and I am still hoping the House scuttles it- even if they allow the rest of this tax compromise) then in the two years after this "holiday" the FICA taxes need to be correctively increased to 14.4% to compensate for the monies lost.

This is basic math! Since more than 12 million baby boomers will begin drawing down in this time - and we have no idea how many more will take S.S. disability for whatever reason (including extended unemployment) - the FICA money offset must be done else Social Security will find itself losing the ability to deliver one fourth of its promised benefits by 2030 instead of 2037.

But what is absolutely unacceptable is to lead people - ordinary citizens - to believe they can enjoy the comforts of immediate salary gains via this putative 2% FICA payroll reduction, and suffer no serious harm later, say in the form of benefits cuts or other strategies. They must be honestly told, upfront, just what they are getting themselves into. And the government must know it is dangerous to play a cynical game which endangers FDR's whole social insurance program at the expense of hoped for political capital in 2012.
Posted by Copernicus at 10:45 AM