Served in Peace Corps: And Damned Proud of it! 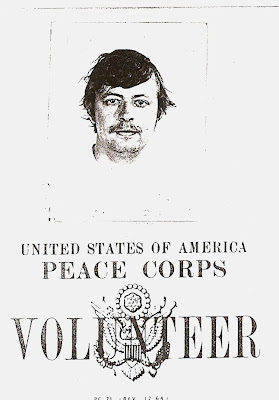 Left: My aunt and cousin standing in front of a sugar cane factory about a mile from the secondary school where I taught in Peace Corps, in May, 1972. Right: overlooking the neighborhood I lived in.

This is the first blog on my Peace Corps service (1971-75) and I do so deliberately, on this day -Dec, 7 - as the war mongers and lovers of war ramp up their rhetoric commemorating Pearl Harbor (by the way see: http://www.smirkingchimp.com/thread/david-swanson/32963/pearl-harbor-a-successful-war-lie ) and bloviate as they pound their chests on the advantages of war and how they who served are more deserving citizens than those who served in other, non-militaristic capacities. They do so to exalt their "military service" - even though that often was usually only in the capacity of a short order cook on a boat, or somewhere far from any enemy lines.

Now, I have nothing whatever against anyone who chose or chooses military service, provided they're doing it for the right motivations. Where I have serious problems is when they (especially family) start taking pot shots at those of us who served in other capacities. For their information, I write this blog - having seen a certain brother's ill-informed hogswill that the Peace Corps is some quasi-"liberal" escape hatch for those who sought to escape duties during Viet Nam.

First, let's set the record straight on the national. historical issue of Viet Nam which was NOT a declared war like WWII. Rather, Vietnam was instigated on a pretext by LBJ in August of 1964 - that pretext being that two U.S. ships - the Maddox and Turner Joy- were supposedly fired on in international waters. They were not, they had intruded into North Vietnamese waters. So the first issue is that 'Nam was begun on a lie. It was undeclared, started on the basis of a lie and hence not a just war by any definition.

The circulated horse shit at the time was that we needed to "protect South Vietnam" to avoid the "domino theory" which held that all of Southeast Asia would fall to the commies if the U.S. didn't make a stand in 'Nam. Last I checked, not only are the S. Vietnamese in better shape economically than the U.S. but theyr'e doing fine overall Never mind the U.S. fried most of their crops with napalm and what they couldn't incinerate, they poisoned using Agent Orange. Real patriots.

During college at Loyola (1964-66) not suprisingly I came out aggressively against the Vietnam incursion in late night bull sessions. I didn't mince words, and never backed down from my positions. This engagement was wrong, and no amount of rationalization made it right. However, when I received a notice in late February, 1965 to report to the New Orleans Custom House for a draft physical on March 6 - I did not run away, seek a "student deferment" or high tail to Canada. I reported at 7 a.m. as assigned and expected. I did not, contrary to some mythology some in my family have entertained the past 40 years- punk out or dodge the issue. So this is also setting the record straight once and for all for these folks.

The results of the exam, which included an IQ test, were that I was in the top 1% for the latter - but failed the physical (being classified 'IY' or only available in national emergency) because of: flat feet, 20-800 vision (legally blind) and "albumen in urine". I did not challenge this outcome, but accepted it, filed away my service classification draft card and continued on with school- leaving a year later to work three years for an Oil company in New Orleans. I then returned to unversity, received my astronomy degree from the University of South Florida and after that, applied to the Peace Corps.

My Peace Corps assignment was in Barbados where I was sent to a just opened rural school to organize its Science Dept. staff and curriculum (I was appointed Head of that Department after 1 year.) My duties entailed monitoring all teachers under my purview and also ordering lab equipment each year- then ensuring preparation of all students for the O-level examinations (in Chemistry and Biology) at the end of the year.

In my spare time I tutored students who were struggling in chemistry, general science and biology even as I helped organize workshops and courses for the Barbados Astronomical Society, and helped launch the Barbados Philosophical Society as a forum for diverse debates and discussions in philosophy, metaphysics and religion.

During my 4 years I also got dysentery once, as well as salmonella, Dengue Fever and gastro-enteritis. During one illness bout I dropped twenty pounds.

When my aunt and cousin came to visit in May, 1972 they deliberately chose to live with me in a rented chattel home (see images of my neighborhood) rather than stay at a fancy hotel. They saw up close what daily life was like and how it was no "day at the beach". They took the same cold water showers that I did, just as they fought off the Norwegian rats like I did when the critters attempted to climb onto their straw mattress beds. That experience, because THEY saw it first hand, disabused them of any notion I was in some kind of cushy redoubt enjoying my days lollygagging with sand, surf and fun. Would that others could have visited, they'd have beheld the same.

Peace Corps, as the ads say, was truly "the toughest job you'll ever love" but well worth it. In the course of that 4-year service I truly believed I was doing something to help people attain a level of development they might not otherwise have had. That's why it's even more of a tragedy that after all this time I still don't get much respect from some in my family - but why be surprised when they don't even like my unbelief stance?

Another canard is that the Peace Corps is some kind of "liberal organization". In fact, of the 300,000 odd volunteers that have served, it's a safe bet that at least half of them have been conservatives- who also believed this was the best way for them to contribute. In my own Peace Corps group, more than half were card-carrying Republicans. Many bragged they voted for Nixon in '72! But it's easy for some to obfuscate facts when one doesn't really care about them in the first place.

As to the pseudo-warmongers having wet dreams today via their self-congratulatory modes of jingoistic expression, just remember one thing: at some time or point, if for no other reason than the money runs out - peace has to be the order of the day. And "waging" peace is often a damned sight more difficult than waging war because you have to actually DO something constructive - not just drop 2 ton bombs or napalm on thousands of black or brown folks.
Posted by Copernicus at 12:05 PM