Algebraic homology is a branch of topology that is used to analyze higher-dimensional structures. This is accomplished by first converting them into flat, two-dimensional configurations, then assigning algebraic symbols to each 'dimension' (chain). Let's consider a relatively simple example: the basic torus pattern shown above:

If one were now to fold over the left and right sides so they join, ABA-left to ABA-right, s/he would be well on the way to re-forming the torus. Taping the two sides together, for example, would form a cylinder or straight tube. To complete the process, one simply joins the oppositely situated circles, ADA-top to ADA-bottom.

Arrows are used to define consistent directions, and either numbers or Greek letters can be assigned to the box sides. This is for ease of identification of the particular equivalence classes.  For example, arrows assigned to segments AB and BA on both sides of the shape shown above are made to point in the same direction, say top to bottom. The same direction implies two sides have to blend together when connected. A similar consideration applies to the bottom ends (AD + DA) when joined. So that the arrow from A to D on top would match an arrow direction from A to D on the bottom.

Thus, for the ‘top’ side of the torus:

and, for the ‘bottom’ side:

These are not just homological spaces but cycles - that are themselves not boundaries. For example, one large cycle would be made by going around the outermost ‘space’ in a clockwise sense, as starting from the ‘A’ in the upper left corner. We would have:

where the -(minus) signs precede the last two terms and help to distinguish their direction from opposite the ‘positive’ space- defined above. This could also be written in a shorthand form:

It can clearly be see that the ‘boundary’ vanishes, since both pairs of sides (H1, H1') cancel out (having opposite signs for opposite directions). This can, of course, be written to include the ‘space’ elements:

Note  that 1-cycles in a triangulated space can be generated by closed curves of the space formed by the edges of the triangulation. One can thereby form the factor group:

For the torus shown:

Or, the boundary of a boundary is zero.

Well, what does all this gain us? Where might we be going? The beauty of this branch of math is that higher dimensionality can be represented with simpler, lower dimensional configurations.   Consider now the ordered tetrahedron (vertices ordered by number) shown below: 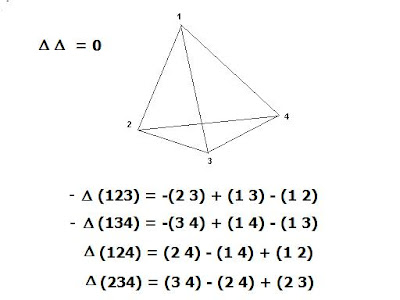 The boundary of the tetrahedron, in terms of its four faces can than be written:


Leading to the result that the boundary of a boundary is zero, or  D D = 0

Or the boundary of a boundary is 0.  This was based on knowing the
number of branches b and nodes n, where:

Show that the same rule applies to the tetrahedron.