Sorry, Reich Extremists, The Left DOES OWN The Moral High Ground In Charlottesville!

Sorry! You don't get to brag about a moral high ground if YOUR side carries Nazi flags!

It seems some brainwashed Right bloggers have been touched in the head enough to believe the Nazis parading Saturday and wreaking havoc were the "good guys" and those run down and injured by James Alex Fields Jr were the "bad guys. Like their demented leader Drumpf, the right wing extremists seem to believe the Left could "not claim any moral high ground"  in the recent Charlottesville clashes. I hate  to disabuse them but they are not looking hard enough.

Look,  if there are two sides competing for a higher  moral ground, it stands to reason that - all other factors being considered-  the side NOT carrying Nazi flags and howling Nazi slogans ("Blood and soil!") automatically has the higher moral ground. Indeed, if one side (counter protesters)  is protesting against those carrying Nazi flags - it's a gimme! They win the high ground! Case closed!  Deal with it!

Two sides were present in the liberal college campus town, but only one raised Nazi flags and only one killed or injured protesters of the other side. That was the white racist savages who unleashed mace cans, urine and even an automobile to attack basically unarmed counter protesters.

The account of Rev. Tricia Blackmon here is relevant. For the duration of the racists' "free speech" march Friday night she had to be sequestered with her congregation at United Church of Christ for their own safety.  This was during a prayer service- as the howling banshee white supremacists marched outside. Even after the service ended Rev. Blackmon and her faithful had to be led out the back doors of the Church to avoid confrontation with a clearly violent bunch  - already having tossed urine bottles at peaceful counter protestors, and clubbed others with baseball bats and shields.

Was she overreacting? Only a mentally deficient person would believe so after viewing this Vice episode with spotlight on the White supremacist maggots that wreaked violence in Charlottesville:


But it shouldn't take an actual documentary showing these vermin at work to show and prove there was only one side with moral high ground. If there were two sides, for two levels or moral probity, the only side coming out clean was the one: a) not carrying any Nazi flags and spouting Nazi slogans, and b) the one that didn't kill or injure anyone. (Today was the memorial service for Heather Heyer, btw, which Trump chose not too attend. But why would he if he sides with the Nazi that killed her?)

Oh wait! There was a slight "injury" of sorts, to Alt Right Rally organizer Jason Kessler's manhood after being tackled by a babe, e.g. 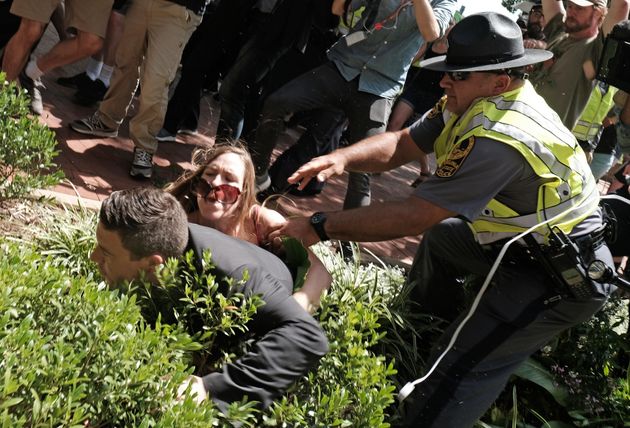 Anyone - like this young woman - who tackles a racist punk - is occupying the moral high ground over him.


Reich Blogdom has also been whining that  Antifa (anti-fascists) were responsible for the violence but they are drunk or delirious.  ANTIFA actually provided protection against the White racist loons and goons who proceeded to beat and mace them.  This was on encountering several African-Americans singing "This little light of mine" near an entrance the storm troopers  should not have entered. Rev. Blackmon  observed this behavior continued on Saturday, noting the African-Americans were set upon by the White racist thugs who proceeded to beat and mace them. As Rev. Blackmon put it, "the only thing that saved them was the intervention of Antifa and other protestors" - one of whom drove the racist louts back using a spray can and a match - effectively engineering a mini flame thrower.

Let's also note that you lose any competition for the moral high ground when former Grand KKK Wizard David Duke praises Drumpf for his cowardly providing cover for these vermin. If you are on the side of David Duke you are NOT on any moral high ground, and most likely far below any "low ground". You are in effect wallowing in a moral sewer.

As MSNBC's Nicole Wallace said this morning on MSNBC:

"There are not two sides to this. There are hideous, hateful enemies of America, enemies of freedom, and there were people truly exercising their free speech."

Translation: Free speech does not include tossing urine, beating with batons or spraying mace on elderly African-Americans singing "This Little Light Of Mine" or running down a young woman in cold blood, and injuring 19 of her peers.  Get that?  If you don't you're in the wrong place typing at a keyboard, you should be holding up a Nazi or Confederate flag at the next White supremacist rally.

Oh, by the way, you don't get to invoke moral high ground by referencing the Dem party's racism 50-100 years ago!  That compounds false equivalence with false analogy. We are all about what is going on now, not in the past, from which most decent humans have evolved, moved on. If you are on the side of those who extol Nazi emblems, slogans and pro-slavery values you have not moved on or evolved and hence occupy the moral lower ground!

Posted by Copernicus at 1:45 PM