Barbados Finally Faces Up To The Reality Of Climate Change - But Is It Too Late? 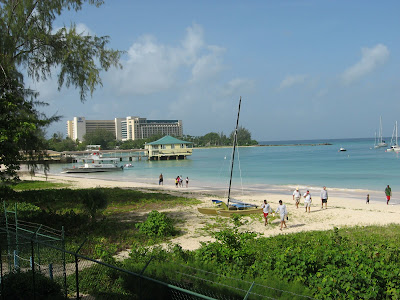 One of the favorite beach areas in Barbados now being claimed by the incursion of the sea. In addition, coral reefs off the shore are dying from higher acidity and tiny jellyfish  ('sea lice') are making themselves a nuisance to tourists.

Dying coral reef off one of the Caribbean islands.

Barely 40 years ago in Barbados I had been waging a months long debate with Barbados Advocate conservative columnist  ELC  - otherwise known as Jimmy Cozier Sr. - over the threat of climate change to the island.  After an article of mine appeared in The Advocate warning of the impending risks: sea level rise, coral bleaching, more mosquitoes carrying new diseases etc, ELC  lampooned each as over the top, total exaggerations. "What will he regale us with next? Martian invasions?"

Of course, that was close to the time (late 1970s) over half of the Caribbean’s reefs still had live coral growth according to a recent report by the International Union for the Conservation of Nature (IUCN). Today that number is at 8% and steadily dropping in some parts of the region. The coral reefs that were once bountiful throughout the Caribbean are falling victim to climate change, reckless overfishing, and wanton pollution.

So now the island - as well as the rest of the Caribbean -  has seen the extent to which my predictions have been manifest. This has been recorded in the spread of new mosquito borne diseases (e.g. Zika, dengue),  beaches having been reclaimed by the sea, and the dying coral reefs throughout the region.

Indeed, in the latest Earth & Space Science News (p. 13) we learn that "from 1982 to 2012 the region experienced an accelerated seasonal warming in sea surface temperatures" of up to 0.21 C per decade. Given three decades in that interval, it translates to up to 0.6C in sea surface temperature rise. This increment would easily explain the extent of coral bleaching in and around Barbados, as well as the rest of the Caribbean.

Flash forward to two weeks ago and we learned of the launch of the National Training Workshop in the Use of Climate Change Impact Tools and Models for Decision Making at the University of the West Indies.

Speaking at the launch ceremony, Minister of the Environment Ricardo Ward said the workshop -  developed by the Caribbean Weather Impacts Group-  presented a “much needed and long overdue effort” to address the challenge of climate change.


He noted that the 2017 Commonwealth Caribbean Marine Climate Change Report Card reaffirmed that Caribbean states were vulnerable to climate change, which could also have a significant negative impact on the quality of life of their people.

In addition, the project manager stated that the sea, reefs and coasts throughout the Caribbean were also under threat from coral bleaching, ocean acidification, rising sea temperature and storms, and therefore concerted actions  needed to be taken. But the question is 'what"/ As reported in numerous sources barely 4 years earlier, the forecasts for nearly all coral reefs perishing in the region were already on record.   Bajans then may well have realized it may be too little, too late.

Mr. Ward seemed to acknowledge this when he told The Barbados Nation:

“The re-occurring impacts associated with the now seemingly annual episodes of drought and flooding that are experienced nationally and regionally, provide clear evidence of our climate risk exposure, the urgency with which adaptation actions are required to safeguard our limited socio-economic asset base,”

The subtext being that perhaps the island ought to have been more pro-active when it did have the economic asset base and financial standing,. This would have been in the mid -1980s, before the experiment with Reagan-style supply side tax cuts commenced in 1986.

Mr. Ward did note that exposure to the new and innovative tools would equip participants with the ability to perform hazard assessments under a range of climate scenarios and generate the kind of data that is vitally needed for long range planning and climate resilience efforts.  Translation: he is thinking of "adaptation" strategies - which most of us know will be of only limited use at best. See my post from two days ago responding to two Hudson Institute clowns; claptrap in the WSJ.

Meanwhile, Ulric Trotz  -  Deputy Executive Director and Science Advisor with the Caribbean Community Climate Change Centre-   , explained that the current  tools were developed through a USAID-CCAP (Climate Change Adaptation Project) which was started last year.  This also is problematical. given said project was initiated under the Obama administration - which plans, agencies (e.g. EPA) are now being overturned and undermined by the Trump Huns.  That includes top climate arsonist Scott Pruitt.

Trotz then explained - seemingly oblivious to the U.S. politics- that the tools were the result of a joint project between a number of entities, including the Climate Change Centre; the Climate Studies Group at UWI Mona; the Computer Studies Group at the Cave Hill Campus, the University of Suriname and the Institute of Meteorology in Cuba.  Again, without sufficient resources provided how will these entities proceed? We know none of the island states, including Barbados and Jamaica (UWI Mona campus) have the financial means to sustain a long term project.

Scientific Officer with the CCCCC, Ottis Joslyn, explained the training would be conducted in the lab of the Centre for Resource Management and Environmental Studies (CERMES), and expose participants to the Tropical Storm modeling tool, which is coupled with a hydraulic and hydrological model; the weather generator and the Caribbean drought assessment tool.

This is all well and good, but hopefully not too late. Hand in hand with these physical changes noted are the hazards they pose to people. More than 120 million people live in the area. Despite steady, albeit inequitable, economic growth during recent decades, the region has become increasingly exposed to climate-related pressures that threaten its social and economic well-being.  This has now worsened since nations such as Barbados have seen their national debts soar to huge proportions of their GDP.

The region’s extensive coastlines, relatively low capacity to adapt to changing conditions, scarce natural resources, and limited infrastructure further intensify the perception of risk, as pointed out in the Earth & Space Science News piece.  None of  this is abstract either, but has real world impact. Hence, the importance of these ocean ecosystems cannot be overstated. Not only do they possess massive biological significance but they represent a major financial boon as well. (See the image of one of Barbados' favored beaches at top.) They are linchpins of the tourism and fishing industries, and provide invaluable protection against potentially harmful hurricanes.  The economic benefit that coral reefs alone offer is valued literally in the billions. Areas such as the Bahamas and Virgin Islands (truthfully most of the Caribbean) depend on tourism as their primary industry. The destruction of the coral reefs could potentially decimate their economies, plunging their citizens into dizzying depths of poverty.

But at least we can say the powers that be are finally taking note. Most of us who have lived there only wish it had been much earlier when actual effective courses of action were more feasible.