Post Eclipse - Can The Awe and Wonder Be Translated Into Learning, Scientific Endeavor?


The Solar corona imaged at totality yesterday. Can the awe and wonder generated in millions continue?

Astro-camp at Harry Bayley Observatory in 1990.

It was gratifying yesterday to behold millions of Americans with eyes skyward, transfixed by the total solar eclipse unfolding above them.  As one TV commentator observed, "here for once we had something to unite the country instead of dividing it". And indeed, we have to be grateful that a celestial 'show' that can captivate and take the nation's eyes off politics at least for a few hours.

Now that the "great American eclipse" has ended, inquiring minds want to know if the interest - especially in astronomy -  can be sustained.  Indeed, is it possible to parlay fascination with transitory (but special)  celestial events - which grab enormous public attention for a day or two - into sustained interest and perhaps even long duration learning?  That appears to be the sixty- four dollar question.

What I am hoping, having been involved in astronomy education as well as research, is that this eclipse (and another cross- USA event for 2024) will at least spur some of the millions staring at the event yesterday to learn more.  Maybe, if awed enough, that will stoke a curiosity  to learn how exactly  total eclipses can be predicted. This could then entail everything from learning about the Saros cycle, to delving into books on spherical astronomy and the nature of "ecliptic limits" and the "Besselian elements for a solar eclipse".  In other words, many will be spurred to move beyond the simple "ooh and aah" stage to investigate the detailed mechanics of precisely what goes into making such a celestial event.  People will then also learn it's not a "miracle" , i.e. that Sun and Moon were "so precisely placed to cause this",  but a matter of hard mathematics and geometry.

The latter would even disclose to the probing mind that just because Sun and Moon are in alignment doesn't mean the eclipse will be total. Thus, because the Moon's orbit is elliptical that means its distance to Earth can change - between its apogee (farthest point in elliptical orbit) to perigee (nearest point).  Because the Moon is significantly smaller in diameter at apogee it will not be able to totally block out the Sun in the event of an eclipse, so the eclipse is now "annular", e.g.

It might sound profound to say, but discoveries like this can often spur a lifelong interest in astronomy and even a career. In this case, I still recall a student who attended our "Astro camp" at the Harry Bayley Observatory going on to pursue astronomy at Stanford. The student had never realized that all solar eclipses need not be total, and decided to pursue the specialized science of astrometry to learn more.

Personally, I'd much rather see more Astro-camps, emphasizing astronomical observations and studies of assorted celestial phenomena, than "money camps" - such as one recently held in Denver for kids 7 -11 years of age.  According to a WSJ report from June, 85 kids assembled for a "Junior Money Matters Camp". According to the account:

"These campers come for a week inside classrooms, spending seven hours a day studying things like the U.S. current account deficit, and supply and demand dynamics"

"Teaching economics and finance to this age group demands, patience, creativity and the occasional bribe. Camp counselors also had to punctuate lessons with clapping exercises -  to recapture errant campers' attention."

Seriously? I will wager any amount that those kids would be much more enthralled (and attentive) surveying the craters on the Moon through a powerful telescope, or assorted galaxies, nebulae and the planets.  Indeed, it is precisely in the ages from 7- 11 that curiosity in natural wonders and phenomena peaks. So why squander that on money matters? Those can always be learned later.

When one 10 year old was asked why she was there, she replied:

Totally missing the mark,  given economic parameters and policies constantly change -  whether via tax laws or via new banking regs and the fiduciary rule. In other words, like most anything - one must be committed to continue learning. So why not learn about how lunar craters are formed at that young and impressionable age, instead of filthy lucre?  Well, perhaps because our culture and society is now overly obsessed with the latter, often at the expense of natural wonder.

Another aspect of the problem was noted yesterday in a WSJ piece ('Even in Sunlight, Nature Is Spectaculur') by  Danny  Heitman.   He wrote:

"As the media coverage of Monday's eclipse makes clear, popular culture conditions us to think of nature as a series of cinematic blockbusters: the Northern lights, the 100 year comet, the once-in-a-lifetime chance to see the Sun vanish in the middle of day".

"But seeing nature as a kind of amusement arcade, worthy of note only when it dazzles, blinds us to the basic wonder of the land, sea and sky on any given day."

He's totally correct in this assessment.  The end result is that nature becomes merely another "product" to be consumed, then chucked for the time being - until another dazzling manifestation. There is no appeal to genuine understanding or constancy regarding that particular aspect of nature - whether the aurora, total lunar and solar eclipses or planetary conjunctions.  How to move beyond that? This requires commitment to learn and process in more than a dilettantish way. It demands, in other words, vastly more than being a mere consumer of cheap, transitory thrills.

Schools are the logical place to start to instill learning more about the eclipse as well as related phenomena, say the solar corona and CMEs. A perfect example is "Citizen CATE"  which integrated 68 teams in an amateur science experiment to learn more about the eclipse, as well as the solar corona etc.  As Director Matt Penn pointed out this morning on CBS, with 68 teams observing the eclipse, it could be followed across the U.S. and data could be taken "sequentially".  Penn is based  at the National Solar Observatory and will use the data, having provided the volunteers (mainly students) with equipment and instructions.

As Penn put it:

"If the network works perfectly we will get thirty times the data of previous studies. Even with fifty percent participation we'll get ten times the amount of data."

It is very likely that having participated in such a project the teachers of the citizen CATE students will not let their curiosity lapse but rather super charge it for further scientific investigations, projects. It is hoped that other science educators do the same, perhaps even instilling enough energy and pluck so the students themselves conduct their own astronomy or astrophysics seminars, such as ones held in Barbados, e.g. 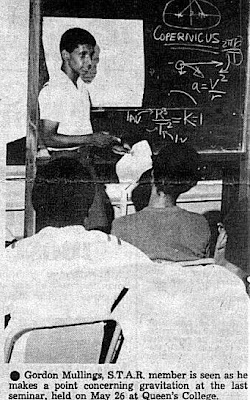 It is certainly a goal to be pursued and applauded. As for the adult population mesmerized and awed by yesterday's eclipse, one hopes that at least a trip to the library (or online Googling) is in the works to now learn more about what they saw.