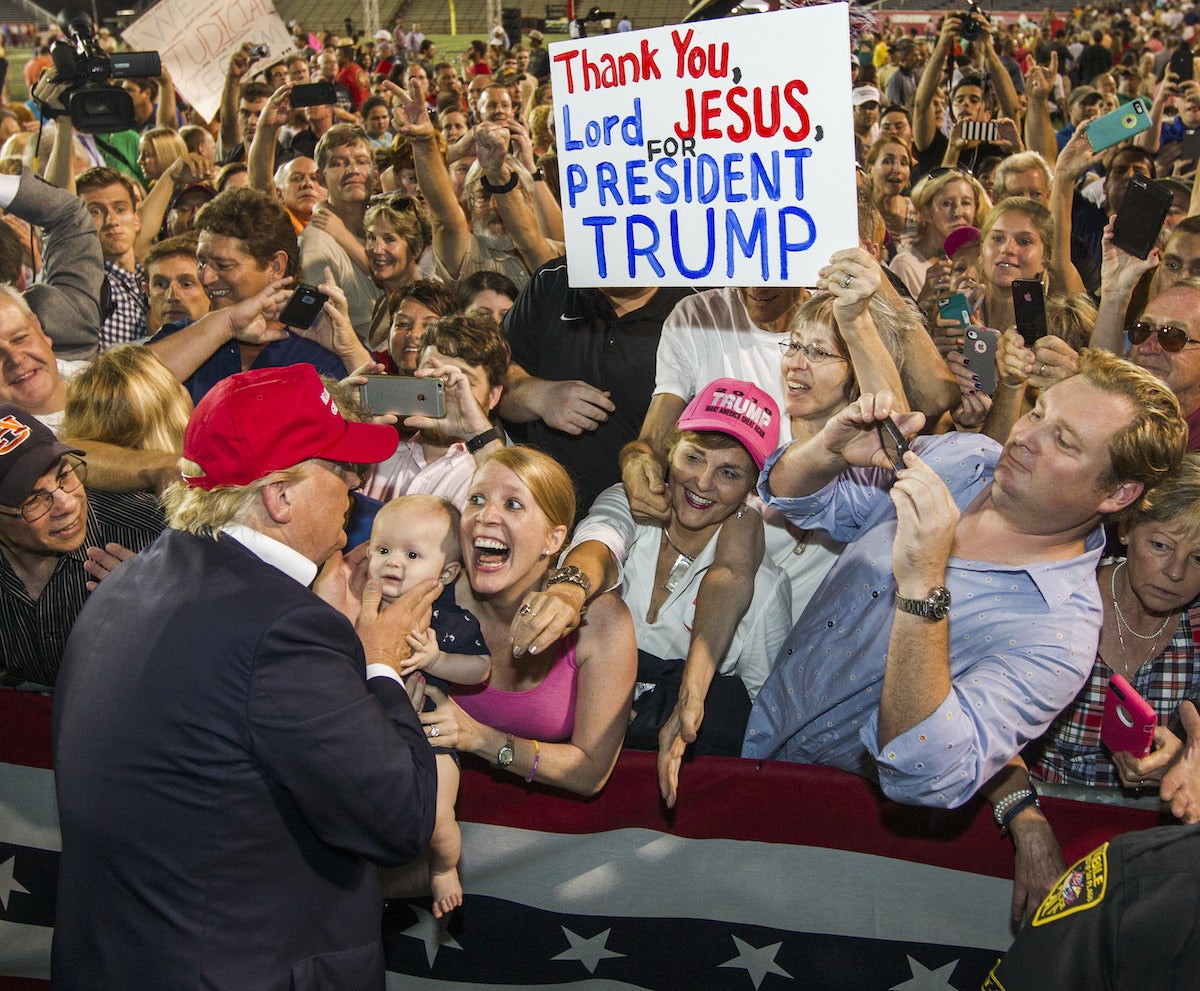 Trump mobbed by some of his 'drunken' supporters at a campaign style rally. If these people aren't idiots, they are certainly acting like drunks.


To say that Donald Trump is a despicable maggot does a  disservice to all insect maggots. Not even those larvae of some of the filthiest critters (house flies, horse flies, etc.)  on the planet deserve to be compared with the diseased, bipedal maggot fouling the White House and the office of the presidency.

Not only has this verminous cretin  remained unapologetic regarding Heather Heyer's death but last night even had the temerity and chutzpah  to portray himself as the true victim of the deadly events in Charlottesville. He launched an all-out assault on the media,  branding journalists who “do not like our country” as the true source of division in America.  Even former NSA head James Clapper was aghast, saying he did not know how much longer the country could sustain such vitriolic division.

And yet, like drunks, the Trump supporters loved it. I will get to that in a bit,  citing FT columnist Gary Silverman's recent piece, but first more on the events last night.

Trump, at the rally in Phoenix, reminiscent of his populist election campaign,  attacked coverage of his response to the white supremacist violence and complained bitterly to his audience about how he had been treated.  The interesting aspect, which his inebriated followers likely missed, is that he deliberately lied by omission when recounting his original statement on the Charlottesville violence.

Thus while reading out his original remarks to polite applause,  he failed to repeat the inflammatory words he had used when he blamed “many on both sides”.  But why be surprised at this omission? It is classic Trump, pathological liar that he is, always manipulating his inebriated followers into blindly advocating the destruction of their own country. This is especially after he called for a shutdown of the government - which will cause their own Social Security checks to stop.

Trump also made other statements, deploying authoritarian rhetoric, as when he declared:

“It’s time to expose the crooked media deceptions and to challenge the media for their role in fomenting divisions and yes, by the way, they are trying to take away our history and our heritage.”

Like those pro-Nazi crowds, the Trump  crowd – some scowling, some laughing – turned and jeered at journalists in the media enclosure.  They had imbibed their master's poison cocktail that the media and journalists were the real enemy and would spare no epithet to mock them, (Many of these heard by the media but not reported to adhere to basic standards of decency)

Even as the Swine-in-chief raged on - seeking to entice more outrage and violence with his inflammatory rhetoric -  protesters outside the Phoenix Convention Center had gathered to voice anger at his presence. Police used smoke bombs and teargas on the crowds after plastic bottles were reportedly thrown.

Make no mistake that the Phoenix rally was the latest example of Trump as a Jekyll and Hyde public performer, coming just 24 hours after attempting to "flip the script" using an aimless, useless speech setting out future "strategy" in Afghanistan.  This basically amounted to changing his original position (to pull out) and instead continue throwing money down the drain after 16 years - the total now at $800 billion. Money that could have been used to repair the U.S. crumbling infrastructure. Trump, as seen in his deplorable lack of history knowledge to do with the Civil War, doesn't grasp that NO invading country has ever been able to secure a foothold in Afghanistan.

Then last night - probably trying to distract from empty Monday night speech,  Drumpf was back in his element, pugnacious and freewheeling, throwing red meat (or bourbon shots?) to an eager crowd of Trump junkies. The arena, which has a capacity of 19,000, was mostly full of people waving signs saying “Drain the swamp”, “Make America proud again” and “Women for Trump”.


He repeatedly broke off from his teleprompter to call out “the failing New York Times” and Washington Post, which he branded “a lobbying tool for Amazon”. Amazon’s founder, Jeff Bezos, bought the Post but the entities have no relationship.

And his asinine, deluded followers drank it up like so many "shots of Tequila".  The analogy is in reference to the  Gary Silverman column: 'Drunk On Trump - Why The U.S. Is Under The Influence' in The Financial Times, e.g.

Silverman compared Trump's rhetorical shots at the Left, the media and "political correctness"  to successive shots of Tequila consumed by his daft followers.  As he wrote, after referring to Trump's use of campaign style rallies to maintain momentum (and also keep his base revved up)::

"The logic reminded me of the period when I was drinking Tequila by the shot. The same probably hold true for the folks who whoop it up when the president lets loose - as he did last Tuesday saying there were some 'very fine' people among the racists who took part in deadly demonstrations in Charlottesville, Virginia."

Last night, on observing his followers as he delivered one rhetorical ding or lie after another, I was reminded of drunks at a frat party.  One is now left to wonder how rapidly these losers will reach sobriety after he incites a government shutdown over paying for his loopy wall, and their precious government support is no longer coming.

According to a new piece on The New Republic by Jeet Heer:

"Far from being idiots, they are people who would normally be considered functioning and successful. Trump’s supporters are better educated and wealthier than the American average."

Meaning ok, they aren't idiots, or morons or imbeciles,  but they've still taken leave of their senses so have to be in some measure acting like drunks. Like smart frat boys who imbibed too many successive shots of bourbon and beer during a hazing.

The fact these drunks have placed our nation into such jeopardy by enabling a degenerate turd to enter office (via the antiquated electoral college) is bad enough. Their crime of "mischief of faction" is noted. The possibility they could do it again - with more Russian interference if too little is done to stop outside hacking-  is even more troubling. Real citizens have to now do all they can to turn back this toxic tide and not allow Trump to extend his reign of terror  beyond 2020. Simply put, this country can't afford it.

One hopes before that happens, leading to real violence, Trumpkins will finally get sober, and grasp:

"The essential thing to keep in mind about Donald Trump is that Donald is about Donald. He's not about our country, not about anything else but himself."

If the debt limit isn't raised by October 1st, Trump's drunken supporters will hopefully finally see their idol for what he really is, a saboteur and traitor. They will see the jig is up and come out of their stupor. But I wouldn't put any bets on it.
Posted by Copernicus at 8:25 AM