Yes! A Colonoscopy is worth getting! 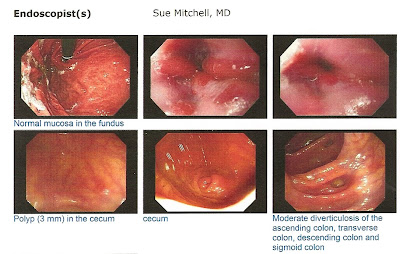 I've just returned from the 2nd colonoscopy in three years, while normally a ten-year hiatus is required between them, once one has his or her first at age 50. (Current cancer screening advice is for ALL Americans to be "scoped" by age 50 to try to detect pre-cancerous polyps. These can then grow to become malignant in 10-17 years and even the removal of all or most of one's bowel may then not be enough to save one's life).

Anyway, I'm glad I did, as a new polyp was found (see image taken by the attending physician) and removed. The great thing about colonoscopy is that the offending growth can be removed right then and there. This time, the polyp was a small one (3 mm wide, vs. 5-6 mm last time) so depending on the histology results I may not now have to return for a new procedure for 5 years.

Amazingly, as much as colon cancer can be prevented by such procedures, they're still avoided by nearly 28 million Americans age 50 and older who, for whatever reasons, refuse to have anything done. Alas, there's not much excuse for avoiding it. The VA allows it as a routine preventive measure, as does Medicare. It is also covered (minus the deductibles) by nearly all private insurers (as mine was) and anyone who works at a medical facility with full coverage is eligible to have it done under their own comprehensive coverage.

So, why don't more have it done? Well, because Americans have this major "discomfort" aversion, and don't want to either: a) endure the prep, or b) having a 15' plus flexible scope inserted into and through their bowel. Basically, the very thought of either creeps them out, and both together have an effect worse than the worst Freddy Krueger gore-fest. But they are foolish for acting this way, because if and when they get colon cancer, their choices will be much more stark, and the outcomes more horrific. And that's assuming they survive to tell about it!

Now, the prep indeed isn't exactly fun. I can think of much better things to do than to down two 64-oz. vats of G-2 Gatorade laced with 119g of Mirolax each in 2 hrs. Then, have the concoction kick in and have to sit on "the throne" for hours at a time waiting for the inevitable "fallout". My usual solution has been to load up a tape recorder with an audio-book and just let it play.

The "clean out" action above is needed to make sure the interior of the colon can easily be scanned by the flexible scope. Obviously, if there's any detritus around this will make it difficult. That's why two days before one has to go on a "low residue" diet - meaning no fruits, or veggie fiber of any kind, just stuff like white rice, baked potato (no skins), white meat chicken and fish. It's actually not to bad once you can jazz it up with some spice - as I did my food with black pepper- which is allowed.

Then on the day before the procedure, it's all liquids day: you get to have stuff like plain black tea and jello for breakfast (for those who need more, a can or two of Ensure or Boost is permitted), then several bowls of chicken broth for lunch, and finally finishing off with more broth and more jello by evening. Main thing is you want to be sure whatever is still inside you from the day before can be easily cleaned out.

By 4 p.m. then, you begin mixing the delicious Gatorade laxative mix. Since you're not allowed any version deep colored (red, blue) I usually go with the lime or lemon variety. It actually doesn't taste all that bad.

My strategy is to drink as much as I can in as short a time as possible, to have it work as fast as possible. Thus, I am able to chug about 64 oz. down in an hour or a bit more, while most people are only advised to take one 8 oz glass every 15 mins.

By 6 a.m. this morning my guts were essentially cleaned out and I was taken to the Endoscopy Center, where the paper work was turned in (including authorizations for all procedures - since I had two: colonoscopy and endoscopy -where they insert a video tube down your gullet and into your stomach- and also Financial Responsibility agreement, and Advanced Directives approval- all SOP) and the documents showing any allergies to medications, which medications you've been on and other medical problems in the past.

You then go to the ante-room where you get your usual "tie in the back", standard issue hospital gown, and they have you lie down as they take your blood pressure, and attach a small hollow insertion vent -needle for the sedation.

Virtually no one has both procedures without sedation, because first: nearly all humans have significant "gag" reflexes - especially when a 3' long tube is inserted down your throat, and second, virtually no one wants to be awake for the colonoscopy. Since I did, and also didn't want to have lots of sedative (based on a 1996 experience I had with versed) I told them the least possible.

It worked. While I recalled or felt nothing for the EGD-procedure (see images of gullet, etc. at top diagnostic set) I was awake enough for the main show - the colonoscopy- to follow what was going on, and actually see the polyp removed.

Both procedures were completed within 30 mins. after which I was wheeled into the recovery room and for once allowed to fart to my heart's content (since you have to have your colon pumped with air to inflate it for the tube to get through and viddy the scene). I think I probably unleashed about ten air bursts, which the RN attending applauded and my wife (sitting beside me) said: "Don't encourage him!"

The deal is that passing gas allows one to get rid of what they put it, and the capacity to do so shows your main pipes are working again, so you can then leave.

By two hours after arriving, we were out on our way to the carpark - though my steps weren't 100% steady, but probably no more than after having maybe five beers. (Btw, the one having the procedure has to be driven home by another responsible person. Yeppers, it's just like the "if you drink, you don't drive" rubric!)

Now, I still have to wait on the outcome of a number of biopsies taken during the probe into the esophagus, duodenum and stomach. These will be shared in about two weeks, where we will meet an RN to go over them. Since my grandfather (father's side) died of stomach cancer at age 60, and was a heavy hot sauce-tabasco man (like I am) I thought it would be wise to have this other procedure done, as did my dr. (Also, since I've displayed a number of atypical "esophogeal reflux" symptoms for some years, e.g. constant throat clearing, my primary care dr. recommended it)

Bottom line: these procedures are available, and people need to take their own health into their hands and have them done, no excuses. There are minor risks, as with any such invasive method, for example small risks of perforation of colon (1 in 1,000) and esophagus (1 in 12,000) but they are small potatoes compared to the risk from either of the cancers that can emerge if they remain undetected!

I do hope this blog gives more people the courage to have the tests, and thereby nip any would-be problems in the bud.
Posted by Copernicus at 10:30 AM