A Reply to a Clueless "Pastor" Brother 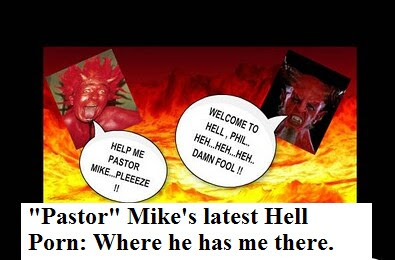 Sometimes I wonder if Mikey or rather "Pastor Mike", has ever taken an IQ test, and if so - what percentile he managed to attain. We know Mensa level is in the top 2%, and I'm fairly sure he didn't reach that. But I'm wondering if it's even in the upper 40%. The reason is that response he made to my blog about his attacking my getting a colonoscopy as manifesting some "fear of death". (And for a brain check on that, he'd do well to read Caleb Shay's recently published comment on that blog, about what befell his uncle!)

Anyway, to set things straight, I just want to respond to a couple of my brother's more hyperbolic remarks on his blog, and also assure him (which clues he ought to have picked up anyway if he was as smart as most real Catholic pastors I know) that my suggestion for him to jump off the "St. Pete Skyway Bridge" was obviously sarcastic, or made tongue-in-cheek. How could it be otherwise when even he has the sense to write:

"Of course , poor old lost soul "Phil,the atheist" probably had to take out his calculator and Quantum Mechanics 'Voodoo' to figure out that I live about 240 miles south of St.Pete.."

Actually, Mikey, I KNEW that already! (Having lived in the Tampa-St.Pete area) THAT was the obvious clue that my "suggestion" was tongue-in-cheek. Merely a rhetorical (though admittedly, vehement) jab at your interminable officious self-righteousness and holier-than-thou posturing. I never in a million years desired you to actually try anything like that - and indeed, if I had been serious I'd not have recommended jumping off any bridges, especially in St. Pete! Personally, what I really want is for us to be brothers again, and put all this back and forth behind us. Agree to disagree, and live and let live. Life's too damned short to have all this arguing and nastiness.

I happen to know it's possible, because a good friend- Nancy - has a sister like you, a biblical literalist while Nancy is agnostic. But they relate because they agree to disagree and not allow their religious beliefs or differences to contaminate their short time on Earth.

But, maybe you see that as an insurmountable psychological mountain. Well, so be it. I'm just saying that as your brother I never seriously would have wanted you to "off yourself", not now or ever. I merely tried to prick some of that stuffed shirt, self--righteous aura that seems to ooze from your blog like so many.....I don't know.....inebriated earthworms!

"But , getting back to "Phil's" "suggestion" that I jump off a bridge . Let's first see what Satan told Jesus to do ."And he brought him to Jerusalem, and set him on a pinnacle of the temple, and said unto him, If thou be the Son of God, cast thyself down from hence" ( Luke 4:9 ) ."


See, Mike, this is exactly what I am talking about! You actually have the absolute chutzpah to compare yourself with Christ being tempted by Satan! Is it any wonder people - like our other brothers, as well as dad (when he was alive)- have found your bible-quoting, soapbox-standing fulminations revolting? Your total holier-than-thou projection? Can't you be like one of us, and just be HUMAN for once, instead of a pompous, self-righteous blowhard and windbag? Can't you just relate for once at a HUMAN level, say brother to brother, as opposed to always morphing into some Jimmy Swaggart wannabe? And preaching as if it's YOUR job to render a fictitious "salvation" to everyone on Earth? (When, even IF there were a God, it'd be utterly pretentious of you to believe you are privy to reading its Mind as to what its particular plan is for each: you only think you know because of your good book obsession, idolatry e.g. http://brane-space.blogspot.com/2010/10/true-belief-as-disease-of-mind.html )

Look, I know you're studying for an online bible degree and "pastor" certification, and more power to you. But can you not just turn the "pastor" or televangelist off once in a while, as opposed to going on 24/7? (If you noticed, even I change my blog content every now and then to capture a diverse array of subjects...from economics to plasma physics, evolution, and politics. In other words, I'm not a "one trick pony"!)

Mike, having compared himself to Jesus being tempted by Satan (despite the fact the off himself suggestion was obviously not serious - as given by the 'Sunshine Skyway' clue) he rambles on as rambunctious as ever:


And again, he is so obsessed, he again makes the comparison of my tongue-in cheek jab at him to Satan tempting Christ! Once more, Mike, read between the lines. Had you done so you'd have seen the egging on was not serious, though my intended jab at your pomposity was. Well, maybe the word play fell through, but how else to puncture an egotistical, egomaniacal guy who - while studying for pastorhood, obviously believes he's the "second coming".

Not unknown for his tangents, he doesn't disappoint this time:

"Of course , it really doesn't surprise me that "Phil" would want me to "off myself." After all , if he could get someone to commit murder via suicide , that's another 'feather' ( or does Satan give out horns ) in his hat . As our bodies do NOT belong to us - they belong to God ! But here again , this is why atheists embrace murdering God's innocent children via abortion"

Again, Mike, this was a two way psychological jab which obviously escaped you. Yes, I tongue-in cheek egged you on about "offing yourself" but only to get you to finally admit - as you have here- that in fact salvation on the Lord JC really ISN'T enough to ensure passage into the pearly gates! It really isn't enough to simply "believe", become "saved" and all is well. As you conceded here, to go out and suicide yourself would not only be the murder of yourself, but also tempting God's good graces. Thus, to do so would have surely sent you to your Hell (that you so colorfully depict me in via your Hell porn) no matter you'd earlier been convinced you had putatively been "saved" via the alleged "redemptive ransom from the cross", to the extent no further actions on your part mattered. Well, you admitted they do! Saved or not you can't just go out and take your own life!

That's all I wanted, really, was to entice you via my blog rhetoric (since I knew you'd read it) to come out and admit that getting saved by "belief on the Lord JC" isn't enough after all. It would never cover your ass in case you had indeed offed yourself. You admit this above. Thus, you also admit that your simple recipe for salvation also isn't enough, and indeed, ACTIONS do count!

And finally, the holier-than thou comes through again (he can't help it):

"So , go ahead "Phil," if you're reading this post . Keep the hate , insults , blasphemy of The LORD , etc , coming . In the meantime , my brothers and sisters in Christ , as well as myself , WILL continue to LOVE YOU "

Mike, I don't "hate you", let's get that clear. What I hate is your holier than thou pomposity, and your constant preaching hate and intolerance against atheists, as well as any who don't fit into your belief mold - including Catholics (like our now deceased dad), Mormons, JW's and Buddhists, as well as Muslims, Eckists, Science of Mind-ers, Hindus, and Spiritual scholars. It's like you'd send anyone to "Hell" on a dime, but you never ever look at what you're doing or how you're coming over.

As for "loving me", if you really did you wouldn't insert an image of me (or figuratively me) in "Hell" as shown. For "continuing to love me" you have a damned peculiar and contra-indicatory, cognitively dissonant way of showing it! And mayhap that is the problem. What you believe passes muster as some higher order "love" doesn't for others, not even minimally. Since at the very least we expect respect of our own belief or non-belief positions, not contempt. So long as YOUR beliefs negate the validity of our positions authentically held, and demonize us (e.g. as "Satan's disciples"), there is no "love"- only abhorrence and hatred. You really need to remove your blind spot about that!

Whereas, if you just dropped the preacher bullshit for once and acted -related like a brother (instead of a fire-breathing Elmer Gantry preacher) I could more believe it.

In any case, you can rest assured your blog content is safe from further attack- facetious, sarcastic or otherwise, as I don't intend to go there to dredge out anymore ballast. You are right, one can always "switch channels".

I do hope that you keep that in mind too!
Posted by Copernicus at 11:03 AM

"What you believe passes muster as some higher order "love" doesn't for others, not even minimally. Since at the very least we expect respect of our own belief or non-belief positions, not contempt. So long as YOUR beliefs negate the validity of our positions authentically held, and demonize us (e.g. as "Satan's disciples"), there is no "love"- only abhorrence and hatred. You really need to remove your blind spot about that!"

The problem is he can't! Mike is Mike and will always be. Just like a leopard can't change spots, Mike can't change his ways. His identity is bound up with this pastor persona so if he removes it he loses his identity. He becomes 'just another groping human' and nothing special. This he can't afford to do!

So, though you have prepared a marekedly superb and civil extension of the olive branch you can be sure he'll spit on it or break it before he accepts. His pseudo-christian hate mongering simply means too much.

As for your tongue-in-cheek play with daring him to dive off that bridge, I could see immediately it wasn't a serious statement. That he didn't, or wouldn't, means he merely needed your words (read out of context) to pump up the his victimhood (by those nasty Satan disciples again) as he's done so often.

See, he needs to be a victim, as well as 'holier than thou'. This way he will always portray atheists as the bad guys. (Recall that blog image he posted about 6 months ago showing him at his ocmputer with angel wings and a halo and white robe, while you were depicted with a tail and devil's horns?

This is how he thinks, in a limited, good and evil mindset. That's why if you're expecting him to receive your peace offering you're not going to get it.

He has too much invested in his hyper-hate and self righteousness to stop now.

He is what he is, and you just have to admit he's more an enemy now than a brother.

This is a follow up to what Jani said. At the very least, Mike needs to come clean and now admit to his followers he had misinterpreted what you wrote and it was tongue in cheek. I notice he hasn't said anything in his latest blogs, despite the fact you set the record straight here.

So, true to form it appears he'd prefer to let his followers go on believing you actually encouraged him to jump off that Skyway bridge than to simply admit he blew it exaggerated the whole thing, turning a molehill into a mountain.

As for comparing himself to christ, that was choice! It just shows how inflated his ego is though he can't seem to see it. But maybe because it's so huge it blocks out nearly his whole field of vision.