Interlude on an Idiot 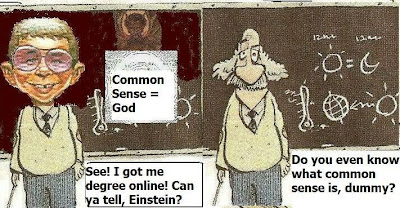 Before continuing to skewer my ignorant pastor bro's attempted takedown of Caleb Shay's answers to his 10 (actually 11) questions, I'd like to deal with the little termite myself - since in his latest blog he's not only attacked Caleb for coming to this forum to get a proper hearing, but gone after me as well. When you do that, bro, you know you are going to get it back - in spades.

As usual and per his unending semantics game, he quarrels that I can't "make up my mind" whether I’m an agnostic or an atheist, despite the fact I’ve explained umpteen times about the difference between an implicit and explicit atheist! But what do you expect of a pretender with a GED who claims to have an “associate degree” from some bunghole backwoods community college and is now studying for an online bible degree.

One sure test to separate academic pretenders from actual academicians is whether they can discriminate between the strong (explicit) and weak (implicit) types of atheist, and atheist and theist agnostics from ordinary agnostics. George Smith (The Case Against God) first clarified this definition in detail:

"Properly considered, agnosticism is not a third alternative to theism and atheism because it is concerned with a different aspect of religious belief. Theism and atheism refer to the presence or absence of belief in a god; agnosticism refers to the impossibility of knowledge with regard to a god or supernatural being.

Now, we reference the "agnostic atheist" in Smith's definitions, and note that he maintains any supernatural realm is "inherently unknowable". But this is NOT the purview of the impicit atheist! The implicit atheist recognizes a basis in (at least potential) knowledge since he withholds his belief on the predication of expecting FURTHER EVIDENCE to countermand that withholding.

Now, expecting evidence means the withholder is already in the realm of empirical knowledge, else he'd not expect evidence. To use this pretend pastor's famous putdown format, if one "had any common sense" then he'd know one who maintains that an entity is inherently UN-knowable, wouldn't expect evidence for it! But does he get this? NO! He instead whines about us "wimping out" when he is the one lacking the brains to appreciate subtley in definitions!

He then follows this up by trying to attack me via Caleb's reporting to me what transpired in his recent experience on Mikey's blog:

“After I put the proverbial "rod of correction" on his behind , that instead of showing me where I was wrong , he has to run to an agnostic who goes by the blog name of "Copernicus" (who is one of those that "poses" as an atheist ) for help . Caleb (after licking his wounds , and with his tail between his legs ) whines to "Copernicus" in the comments section of his ("Copernicus's "blog ), writing ( and I quote ) :"Sorry! I bit and posted answers to his questions, and got gamed by the turkey!”

In fact, the delirious pretender put no “rod of correction” on anyone’s behind, but left his own exposed to be corrected by my 2 x 4, as I laced into his specious nonsense comments about Caleb’s responses. (Previous blog)

But he obviously still doesn’t grasp what’s going on, as he blusters:

“Well hey , "Copernicus," don't hide behind YOUR blog and give your answers. If you find your backbone , feel free to do as Caleb did and post them in my comments section , and I'll show them on MY blog in a regular blog post ! ( though , be prepared to get whupped with the same 'rod of correction' as your cohort .)”

Actually, genius, I’m not giving any “answers”, but rather lacerating your idiotic comments in reply to Caleb’s answers! But what can one expect from a guy that can’t even pass a basic 9th grade equivalent test in evolution? No wonder you barely got your GED!

This idiot is so pathetic he can’t even see how an answer to any of his questions can’t be proper if the basis is skewed and biased. As we see he claims:

“Now , Caleb , answered the question honestly by replying "NO!" Ok , that''s the answer I expect from an atheist”

Not so! Caleb only answered within the limits YOU set ab initio! You allowed only a yes-no response so pre-empted any honest answer (which might have required a more nuanced discrimination of meaning as I noted above in terms of separating the agnostic atheist from the implicit atheist)! You set the parameters, not Caleb –who in order to provide anything had to comply with your biased question set up. (Note in my questions for the link provided, I require no yes or no superficial compliance requirements)

So, true, the ‘NO’ was an answer you “expect from an atheist” because your preconceived bias set it up that way, to deliver your own expectation! But you’re too effing dumb or distracted to see it.

He really displays his monumental ignorance when he attacks my education, blathering:

“Now , here is a guy ( "Copernicus" ) , who is allegedly well-educated and may have a bachelor's degree in philosophy , and perhaps a "Masters" from some out of country boiler room operation masquerading as a "college,"”

Actually, bozo, it’s a Bachelors in Astronomy. The Masters is in Physics from the University of the West Indies at Cave Hill, Barbados, where – after my Peace Corps service, I was awarded a graduate research scholarship in solar physics by the Barbados government. (To do with the prediction of geo-effective solar flares.)

As for some “boiler room” operation (say like your biblical online degree outfit....errr....the South Florida Bible College) no, and one can find the actual link to the Dept. of Computer Sciences, Mathematics and physics here:

Those interested in getting an idea of an actual electricity and magnetism course can go to this link where assorted lectures are available from Dr. Janak Sodha. In addition one can find video clips of actual student lab experiments (at bottom of link page). Hardly a “boiler room” operation!

But again, these are the types of juvenile retorts we expect from this character, who is too dishonest to acknowledge his own dreadful lack of intellectual or educational training. He prefers to attack that of others who possess superior qualifications to his own in every way.

But, as per his usual modus operandi, he saves his most pathetic comment for last as he attempts to load ridicule and sarcasm all at once - and has it blow up in his face:

"Now , MY God-given common sense tells me that if someone states the Bible , Jesus , God , and Christianity in general is all "false," "myths," "fairy-tales," etc..and they spend literally hours on end to attempt to disprove the Bible (which , btw , NO ONE has been able to do in almost 400 YEARS ! ) , then they DON'T believe in God !"

Again, evidence of how information goes into one ear (or brain cell) and exits the other with no impact. In actual fact, any serious reader of my blogs can go back and bring any of them up on the topics he lists and will see I never wrote any such nonsense as he claims. To wit:

- I've never argued Jesus was a "myth" - but rather said one must examine the basis for the historical person - which indicates no divinity aspect (at least that is original, rather than material purloined from earlier pagan sources, for Mithra, Horus et al)

- Never said Christianity is "false" or a "myth". Only pointed out that very isolated sect(cult) versions (like evangelicals- who've only been around since the 19th century) try to base all their truths on taking the bible literally and adopting an authoritative god that doesn't behave divinely, but like an out of control version of the anti-hero in "American Psycho"

- Also, indicated on numerous occasions versions of Christianity - like Unity and Science of Mind which more authentically carry the message of Yeshua, the "Augustinian Hippie", described in the works of John Dominic Crossan, Elaine Pagels, Geza Vermes and others

- Did not dismiss the Bible in totality as "myth" - but showed how evidence (such as major contradictions) disclose it must be interpreted in its proper context with judicious care and not taken literally.

So in his remark he's simply spouting the normal shit that it's his wont to spout, since he knows he can't succeed except by doing what some NFL players do: foul the opponent, QB on the other team to try to halt their progress. It never works, as it doesn't here.

Undeterred he finally hangs himself at the end:

Again, Pastor Sap, perfectly consistent with what I noted above, and also that YOU haven't provided the basis for any evidence for your claim, nor even any necessary or sufficient conditions for it to exist! As for your (non-)belief that aliens exist on other planets, why should we take your ignorant opinion on an issue you know nothing of seriously? In any case, it amounts to mixing chalk and cheese, since you effectively are confusing a natural realm (the cosmos with more than 100 billion galaxies each with 200 billion stars, of which 40 million can support planets with life each) with a supernatural realm wherein your "god" is supposed to exist.

No comparison! There is 10 billion trillion times the probability at least one alien civilization will be uncovered in the next 400 years, than that one of your idiot ilk will prove a God exists!

Now, go back and study for that online bible college degree - and let's hope when you finally get it you become a slightly more educated person than demonstrated in your recent outbursts. And again, if you want my actual answers to anything, you'll have to answer my questions first! This is for your future reference, not that you can remember ten seconds into the past!
Posted by Copernicus at 9:21 AM