Kooks R US: Teepees Get Their Hitlers Mixed Up! 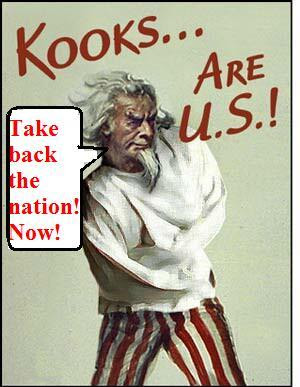 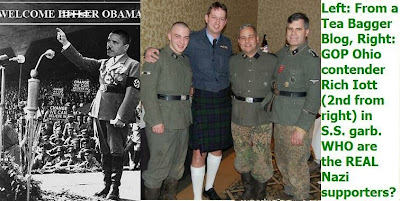 The Tea Partyers are nothing if not hyper. As Maureen Dowd put it in a NY Times column some weeks ago, their recent outbursts and erratic behavior appear to show that the whole nation may be in the midst of a massive nervous breakdown. But I believe that’s an over generalization. Many of us remain rational, though we do regard the current spectacle of so many fellow citizens “losing it” as indicators we need better mental health care, education or both.

Are the teepees kooks or just ordinary lil honest fellers out to make points? Judge for yourselves! On a recent Tea partyer’s blog, the above image and caption was posed along with a hyper victim spiel about how "Führer Obama" purports to treat those poor little Republicans, alleging he made the statement (no source or citation given anywhere):

“We don't mind the Republicans joining us . They can come for the ride , but they gotta sit in back."

Puh-leeze! THIS is what these clueless twerps think passes for “Hitlerite” mandate? (Assuming it’s even remotely true and not something Bill O’Reilly or Sean Hannity put into Obama’s mouth- or the Teepee himself conjured up out of a recent bout of flatulence after eating one of those 64 oz. super burgers. In which case he may need a blogging license before he next assumes the position at his keyboard!)

Even if it is true, let’s think about this: What have the Republicans done the past two years to merit any respect? Hint:Name one major bill where more than two participated in passage. The answer is all they’ve done is obstruct. And proud of it! From a recent Republican mailer (sent to me obviously because they believe an independent might vote GOP: “I wish we had been able to obstruct more!” (Mitch McConnell).

Now, let’s put this in perspective: when a parent asks for his kids’ cooperation, say to lay new sod on the lawn, or help to re-paint the garage, and the kids all rebel and bellow:

What do you suppose the result will be?

Well, on the next trip in the family camper or RV the kids will be told to “sit in the back”!

In other words, they are rightfully treated as the spoiled little bratskies they are and not as family equals. Since they disdained contributing to the family tasks and issues, there's no alternative but to let them chill out in a separate time out. This is all Obama has done in his statement (again, assuming it’s even true, since no source was given). After all, if the Repukes aren't prepared to work in common cause why give them any profile, period? Clearly they aren't up to the job and indeed have already made their intentions known: that they fully expect to "shut down the government" after the mid-terms. Are these the acts of a responsible person or group? People you want "sharing the front seat"? HELL NO!

Look, when a political party or a kid acts like a recalcitrant brat, then it merits being treated in kind. This isn’t the least bit related to a “Führer’s” shtick even remotely.

Amazingly, while these bloggers get their panties in a snit over this and depict Obama as Hitler (showing they have no remote clue about the real Hitler, and need to actually visit Germany like I did and find out from those victimized by him) they slide over the actual fascist violence and words of their own troops.

Say, like thugs of Alaskan TP Senate candidate Scott Miller handcuffing a member of the press, from The Anchorage Daily News and shown on TV. Jumpin’ Jeebus! Hitler’s own SA – which rounded up journalists for imprisonment – would have been proud, but this idiot probably never even heard of either event.

Or, more recently, the vicious head stomping of a protesting liberal at a Rand Paul event in Kentucky. Fortunately, the victim suffered only a concussion, but could have been left brain dead - like the ignorant teepees who just stood around like zombies, watching.

While the teepee twerp scolds and whines about Obama’s alleged words (what any adult would say to impertinent, uncooperative brats) he conveniently neglects mention of the actual violence and hate (in real actions!) by his side. Or even the fact that one of his Tea Party candidate flock - Rich Iott- actually has dressed up as a WAFFEN S.S. - the bunch responsible for having most Jews dispatched to concentration camps. But this is par for his course, since his whole gambit is to be dishonest in whatever venue he aspires to debate. Then he has the chutzpah to allege the “cat” has Obama followers’ tongues? Puh-leeze! (And do remove your cranium from your posterior aperture when you get the chance!)

But one doesn’t even have to look very far in the real press (not the propaganda machine of Faux News) to see what we’re in store for if these Tea Party kooks come to power. Here in Colorado, Ken Buck is a case in point, caught on camera some years ago being asked if he’d go all out to prosecute a rapist, and Buck replying: “Difficult to do when you might find the alleged victim has ‘buyer’s remorse’”

And then there’s Nevada nutcase Sharon Angle (who Joy Behar correctly called out) asserting that if a woman or girl is raped she ought to just “make lemonade from lemons” and have the rapist’s child. Never mind all the months of morning sickness, the threat to health and well being – not to mention mental well being (in the case of a younger female – perhaps victim of incest), you need to suffer that rape longer and emit the rapist’s parasite at the end.

And these same zealots, like Angle – as well as wannabe “witch” Christine O’Donnell- want to imprison any woman who goes ahead and aborts the rapist’s seed, while the rapist will likely be given a plea bargain of community service. Then these assholes have the nerve to compare Obama to Hitler? They have their historical perspectives badly juxtaposed.

What’s really going on here, especially with the millions of tea bagger voters very likely to at least award the House to these maniacs?

According to political analyst Bill Schneider, the Tea Party movement can best be compared to religious fundamentalism. (Which makes sense since at least one Rasmussen poll shows nearly 51% of tea party voters are also evangelicals. Thus, the “Moral Majority” of Falwell appears to have found a new home wrapped in the flag and Constitution, in a new GOP movement. This borne out in a special report: ‘The Resurrection of the Religious Right’ appearing in Church & State, Vol. 63, No. 9, October, 2010)

“It’s not just that tea partyers are anti-government …they are anti-politics. They believe that politics is essentially corrupt, that deal making and compromise are an abandonment of principle. The tea party is a political fundamentalist movement. Like religious fundamentalists, its members do not tolerate waverers. They drive out heretics (like Gov., Charlie Crist, of Florida)"

They punish unbelievers (like Mike Castle of Delaware) and they subscribe to the total inerrancy of their source, in this case the U.S. Constitution as originally written in 1787.”

Schneider adds the last part, because as any dunderhead knows the Constitution is an evolving document. Amendments are continually added, and the form we have now has many more freedoms than that originally crafted in 1787. (Obviously, since the Founders who wrote it were not seers who could see into the future but ordinary flesh and blood men. They expected their descendents to have the vision and common sense to make adjustments as need, not to think that a document scored in 1787 would still be totally relevant "as is", in 2010!)

Thus, if the 1787 Constitution was still adhered to, no 14th amendment, then black people would still be counted as only three-fifths of a person, and no one would be permitted to vote who didn’t actually own property. This little historical fact escapes the tea baggers, many of whom don’t own their own property but have to rent. In other words, these morons are actually in favor of eliminating their own voting rights, if indeed they want to return to the Constitution of 1787 (Somewhat like their religious fundy cousins who’d have us all still following Leviticus and casting out a woman as “unclean” if she’s having her period!)

Getting back to what Schneider wrote, if indeed true, and the Teepees hate the art of deals and compromise, then they are exactly like the Wanderfogel of the 1920s. These Wanderfogel were also put off by the endless deals that had to be processed through their Weimar Republic and by 1931-32 had enough. A “strong man” offering direction and guidance entered, and they followed him like so many sheep.

As my German friend Hans Borgers put it (Hans was a former member of the Wehrmacht):

“We saw in Hitler someone like ourselves but not like ourselves. He was common like us, but a most gifted speaker who promised us new liberty and a stronger nation if we just followed him. We did and regretted it!”

In Germany, the “simpler era” longed for was the height of the Volkisch movement in the Middle Ages, when Jews “knew their place”. In the same way, the Teepees wish to return us to a period where all minorities “knew their place” (after all they counted as only 3/5 of a person) and it’s a White Man’s nation again. They can’t adjust to the demographic fact that America is no longer a white majority nation and it screws with their heads. No wonder they depict Obama like Hitler, because they don’t dare depict him as the pickininnie they desperately want to.

Some teepees insist that they are so into their past they also want to read the Federalist Papers and understand them. Well, why not? Last I checked they were at any library and versions may also be online. I’d suggest starting with James Madison’s Federalist No. 51, paying special attention to where he writes:

And subsequently as to the meaning inherent in the American Republic:

“In a single Republic all the power surrendered by the people is submitted to the administration of a single government, and the usurpations are guarded against by a division of the government into distinct and separate departments. In the compound Republic of America, the power surrendered by the people is first divided between two distinct governments, and then the portion allotted to each divided among distinct and separate departments. Hence, a double security arises to the rights of the people. The different governments will control each other, and at the same time that each will be controlled by itself”

Thus, the protections afforded to secure the rights of all citizens are already in evidence – manifested by the separation of powers. We have not only a divided governance in the House and Senate, but in addition three separate branches: Executive, Legislative and Judicial. Obama occupies only the Executive so can’t possibly be the tyrant so many make him out to be. By contrast, within a year or so of Hitler’s ascent to power the German constitution was already rendered defunct by having removed the key protections. This gave Hitler carte blanche to do whatever he desired. Obama has no such absolute power and to depict him with such as to not only show gross ignorance of one’s own country, but history as well.

If the Tea Party Brigade can lose their hysteria and victimization for a few minutes, they might well bestir themselves to not only read the Constitution but many of the Federalist papers as well. If they do so, they’ll be less likely to make themselves out as idiots when they hold up their signs reading ‘Don’t Tread on Me’ and also they’ll be more likely to be seen as sane when they cease portraying Barack Obama as Hitler.
Posted by Copernicus at 8:12 AM