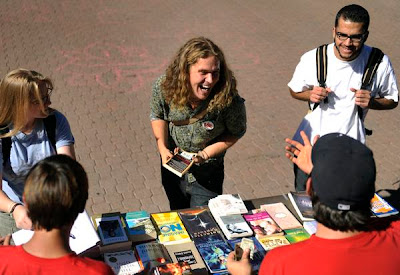 Millennials at the University of Denver engage with atheists as part of a book exchange to raise money to feed the homeless. University is an excellent opportunity for young minds to expand.


Continuing good news erupts for those of the unbeliever mindset. We already saw that atheists and agnostics score higher than religious people in terms of religious knowledge (one plausible reason they are unbelievers in the first place, because they know MORE!), see:

An independent think tank, The Pew Research Center, now finds that the demographic known as "Millennials" (in the 18 - 29 age group) is pulling back from attachment to organized religions, especially of the conservative, politically -affiliated forms (namely mainline evangelicals with dozens of political "irons" in the fire). Seems they are turned off by the overt politicization of faith, and see the entry of political agendas as actually compromising the alleged core truths of the more conservative sects.

No wonder! Caesar and Religion never have mixed well, which is why in America we have the separation of Church and State (which moron Teepee Queen Christine O'Donnell seems to believe must be specifically stated word for word. No, Christine- the First Amendment de facto embraces the principle as well as per assorted higher court rulings and the famous words "wall of separation" invoked by Thomas Jefferson in his letter to Danbury Baptists, 1802. ME 16:281 ):

"Believing... that religion is a matter which lies solely between man and his God, that he owes account to none other for his faith or his worship, that the legitimate powers of government reach actions only, and not opinions, I contemplate with sovereign reverence that act of the whole American people which declared that their Legislature should 'make no law respecting an establishment of religion, or prohibiting the free exercise thereof,' thus building a wall of separation between Church and State."


In other words, Jefferson has effectively translated the words in the First Amendment, that congress "shall make no law respecting an establishment of religion, or prohibiting the free exercise thereof" as building a wall of separation between Church and State. No wonder so many people had to stifle their imminent eruptions of derisive howls as this bimbo sheepishly grinned - during her debate with Chris Coons in Delaware- believing she'd actually gotten the better of him (somewhat analogous to a certain pastor I know who thinks he keeps getting the better of unbelievers, when in fact he's had to consistently tend to his massively bruised behind.)

- Milliennials' belief in God is lower among young adults than among older adults,


- In their social and political views, Milliennials are clearly more accepting than older Americans of homosexuality, more inclined to see evolution as the best explanation of human life and less prone to see Hollywood as threatening their moral values.

Despite these advances, and yes - a major cause for hope that rationality can once again return to this country and temper its more emotional excesses and unsupported religious baggage- much more work needs to be done. The reason is that the same Milliennials' survey yet discloses: 1) their beliefs about life after death and the existence of heaven, hell and miracles closely resemble the beliefs of older people today (:( 2) the number of young adults who say they pray every day rivals the portion of young people who said the same in prior decades :(, and 3) Millennials are no less convinced than their elders that there are absolute standards of right and wrong.

Now, I suspect the greatest hope for change will be precisely in the 18-year old college entry vanguard. Their minds, though indeed polluted by their parents' belief systems (simply by virtue of years living in such brainwashing atmospheres) can be liberated once they are open to new experiences and inquiry in the university setting.

In my case, entering Loyola University with 17 + years of hard core Catholic education, I deliberately chose experiences to balance that prolonged propaganda- such as finding out when university -sponsored lecturers would appear at the Loyola Fieldhouse. The most game changing lecture of all was one given by French Existentialist Philosopher Jean-Paul Sartre in late 1964, on the topic of good faith and bad faith. It was that illuminating lecture that set me on the path to atheism, so I guess I have the Jesuits to thank in the end. (I can't see that if I had been attending Falwell's Liberty University, or Bob Jones University, they'd have allowed a bona fide existentialist to lecture!)

Ultimately, then, the choice for brain-mind growth or deterioration-stasis is in the hands of the same Milliennials. As I noted in an earlier blog on true believers, it takes courage to burst outside the comfort zone of set beliefs and find your own path. It is highly rewarding, however, because in the process one confirms he or she is not merely a puppet or zombie but an exploring person in one's own right. While the evangelicals dread self-inquiry and probing questions, preferring everything be "fixed" - like with those old "payola" game shows back in the 50s, the skeptic always challenges his existing assumptions and mindset. Indeed, I am not the same atheist I was back in 1996 or even 2000. Whereas I was more a strong atheist back then, I am now more implicit, meaning I am still willing to accept possible grounds for deity IF the backers can provide me with satisfactory evidence and not mere god talk or baby babble that effectively insults my intelligence.

My starting point, as always, is to ask for the necessary and sufficient conditions for a particular deity to exist. If those can't be provided, or the person asked dodges the question, then I know he isn't seriously invested in the debate and is merely looking to posture his belief without support. Up to now, and over 30 years, only one Christian has complied - and his doing so meant invoking a watered down deity of the Socinian form, and letting go of the "omni" (omnipresent, omniscient, omnipotent, etc.) variety. If was a tough go for him, but he at least got me thinking more of plausible states of ultimate Being - even if not fully embracing them. (Former astronomer Bernard Haisch's 'God Theory' is another example).

I hope many more Milliennials are up to doing the same sorts of things, and making the same exacting searches before cashing their chips in with some specific belief system. And if there's one definite book I'd recommend for them to read, it's Alan Watts 'The Wisdom of Insecurity'. As Watts notes

"A careful study of comparative religion and spiritual philosophy reveals that abandonment of belief, of any future life for one's own...is the first principle of spirtual life"

It certainly isn't slavishly following in the mental or psychological footsteps of a parent who thinks he somehow has all the answers, or knows it all (including what's coming after death!) That way mental ossification and immense disappointment lie, as well as not being true to one's own sense of exploration.
Posted by Copernicus at 2:19 PM