Is Economics a Science? 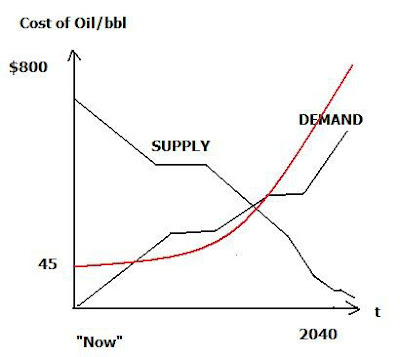 A supply-demand depiction based on a faulty economic model for oil reserves and consumption. The time axis (t) is as shown, and the cost is given per barrel of oil - the cost graph is in red. The model erred by: a) not taking into adequate account rising population and its effect on increased petroleum consumption, and b) not reckoning in the effect of Peak Oil until too late.

In today's Wall Street Journal, Russ Roberts heads his piece (p. A13) with the provocative question: 'Is the Dismal Science Really a Science?' One of the knocks against the Economics ("the dismal science") being one is that as Roberts observes: "theories that were once discredited surge back into favor". This seldom if ever happens in the rigorously quantified sciences, such as physics, astrophysics and cosmology. The Big Bang - having been vindicated via the discovery of the 2.73 K microwave background radiation, is not going to disappear all of a sudden and be replaced by the steady-state theory again. And I can't see us chucking out Einstein's General theory of relativity to use Newton's theory of gravitation exclusively (of course, the latter remains useful for relatively small space-time domains).

More telling is Roberts relating his experience of asking economists if they could give one example of a study using applied econometrics for a controversial policy issue - such that one side had to admit it was wrong. In Roberts' own words: "I don't know of any".

My objections to economics being referred to as a bona fide science are perhaps more "in your face". To me, Economics has never been a science, it only adopts some scientific window dressing, a few of the methods (mostly statistics) and some jargon. But no serious empiricist would regard it as "science" - by which I mean it hits the normal criteria for being identified so.

For example, Economics has no true objects of inquiry - say like physics - nor does it offer any consistent, theoretical models that don't rely on statistical artifacts. Even in the realm of statistics it tends to fudge them based on political expediency. For example the BLS stat for unemployment is intentionally lowballed by dropping workers who are still unemployed off the rolls after 6 months. Quite a tidy trick that! It keeps the unemployment rate below 10% most of the time, unless wide swatches of workers are let go at once. By contrast, Barbados and most of the EU (European Union) count workers as unemployed so long as they really are. They aren't working or producing so they're unemployed - not "discouraged". This latter is an artificial category concocted by the 1994 (mainly Repug) congress to conceal more than inform. Yet Economists employ it (okay to be fair, they also employ another rate that amps the numbers up a bit and is somewhat more honest - since it includes part time employed people).

Another statistical gripe I have is the use of "core inflation" (omitting costs of food, health care, housing). This one allows political interests to deliberately lowball the inflation rate in order to keep their pet numbers jiggered in the right way - especially so that the powers-that-be don't have to cough up too much in Social Security COLAs! I mean, give me a freakin' break! Can't this country deal with reality at ANY level? Must it always be Mickey-Moused? Do you think any physicist worth his salt would contrive something like "core energy" - say by discounting all energy inputs from sound, heat, and chemical? He'd be routed out of any institute!

Nor does Economics make quality predictions based on said models, say like atomic physics. (Prediction of specific spectra - emission or absorption- using the Schrodinger equation, and the correct energy eigenvalues for the atom chosen). If it had such capabilities, it would have seen the 2008 meltdown coming well in advance and warned everyone!

And at this point let me get another point clear- even the most rudimentary student of statistics understands that distributions, etc. don't show causality, but correlations! Because you have correlation, does not mean for a moment there is causation. The confusion of these two is the single most recurrent contributor for inflating economics into any kind of "Science". (Since models must be founded on seeking out and exposing causation, not merely correlation or coincidences)

Let me give some concrete examples, from my field, of solar physics. In two 1984 papers, one in Solar Physics, the other in The Journal of the Royal Astronomical Society of Canada I provided the basis to show how a solar flare trigger is feasible, and the theoretical conditions that might apply. In the former paper this was based on using a pure statistical model, with Gaussian (normal) distributions of flares, and multiple regression analyses. In the second paper, it was based on a consistent model that incorporated actual, physical features and observations.

What I did is to show how my mechanism, embodying a flare trigger depending on multiple agents (twisted fibrils, deformed magnetic polarities, magnetic gradients > 0.5 Gauss/cm, sunspot areas > 15000 msh or millionths of a solar hemisphere) , caused flares via a magnetic shear process. And thence, I showed which agents gave rise to which class flares. The final computer model allowed one to calculate the resident magnetic free energy, the generating twist angle of fibrils, the magnetic intensity and other physical indices directly from the quantities and mathematics of the model. (I used several partial differential equations, in tandem with Green's functions - and used Laplace transforms to obtain solutions to the physical equations) Statistics can crudely describe - in a correlative fashion- some primitive aspects of an empirical system.

For example, as in my first referenced paper (noted above) I wanted to obtain the correlation between the incidence (frequency) of a certain type of solar flare (generating importance 2+ sudden ionospheric disturbances) and delta class sunspot groups. I did a linear regression to find a fit for F (flare frequency) vs. T(S) type of sunspot group. I obtain a statistical function of the form:

where C is some quantity that intersects the particular (y-axis), in this case the one for F. This is a statistical representation of an empirical relationship. However, and this is important, the statistical relationsip (F = T(s)) + C) tells me nada - nothing, about the underlying physics that produces flares!

The mathematical model for that might be written(to start):

where 'curl' is a complex mathematical operation using partial derivatives, and it is applied to B - the magnetic induction. Or strength of the magnetic field in the sunspot, or group. (We measure B directly using magnetometers, which produce vector magnetographs for specific regions, sunspot groups) Further working through this model yields:

where 'DIV' is another math operator called the "divergence". From this, we can obtain the partial differential equation for the magnetic field (B - which applies to the sunspots in x, y and z dimensions):

which can then be solved - with the various quantities (alpha, B and currents obtained from these) compared to the actual observed properties in the sunspots. This is far, far distinct from any statistics - as it uses and incorporates actual physical properties of a particular model. Whereas exclusive use statistics omits all these details. More to the point, as my own research has disclosed, we can accurately trace variations in the Earth’s magnetosphere to plasma eruptions and changes on the Sun proper. For example, registered in terms of species of protons captured at the Earth's magnetosphere, and the variable intensity - in watts per sq. meter- of soft x-ray fluxes.

Meanwhile, in plasma tokamak devices, we can test solar flare theories directly via the kink and other induced instabilities - that shed direct light on our models and expected behavior.

Meanwhile, the illustrious economists - in their naive and incomplete statistical "modeling" -are prepared to ignore (as in dismiss from consideration) an entire raft of variables associated with what they call "externalities". How very convenient!

These glaring and inexcusable ecosystem omissions (as global monetary values), were assayed for one particular year in the study Putting a Price Tag on Nature's Bounty, Science, Vol. 276, p. 1029):


This tally (and that was a decade ago) according to lead author of the study, Robert Costanza, who directed the Institute for Ecological Economics at the University of Maryland.

Until economists incorporate such "externalities" in terms of assessing costs, they are fooling themselves that they have any real science. And if they don't incorporate these "externalities" then what they are "tweaking" in their alleged models isn't even real. (Rather, some idealization that is fabricated in some ivory tower and disconnected from blood and sweat economics).

This exclusion of natural capital, because it is claimed to be 'unquantifiable' - means that that economics cannot possibly be objective - since it's omitting the basis of many of the resources consumed or polluted for the use of so-called production capacity.

But if one isn't aware of the total costs of production, such as how much natural capital goes into producing 300 million tons of paper, or 4.5 million vanities, then one can't possibly set a genuine price on goods, and that alone demolishes the pet concept of "law of supply & demand" (which is certainly unlike any Newtonian law of physics!) so many economists exalt. Not to mention severely undermining any rational assessment of inflation.

It’s somewhat analogous to a corporation like Enron hiding liabilities in offshore accounts, and re-naming them “assets". It temporarily helps their bottom line - but sheds no objective light on the underlying process! It would also be like a clueless solar physicist claiming he can't possibly quantify the energy released by a solar flare on the Sun - because it's 93 million miles away. (Never mind the satellite capture of the associated 1-8 Angstrom x-ray flux allows a really good estimate to be made, by integrating the area under the peak emission(s) over time t).

Granted, economists do have a pale imitation of science, and who knows - maybe in a few hundred years they'll join the full club- after their objects of inquiry and methodology acquire greater maturity. When we see their first bona fide model, as opposed to a statistical macguffin that they inaccurately call a "model".

In his own WSJ piece, Russ Roberts is more than generous when he allows that:

"If economics is a science, it is more like biology than physics"

But I wouldn't even grant that threshold! Remember that biology - though it "tries to understand the relationship in complex systems" - is actually able to flasify its own predictions, and has attained a very high pinnacle of quantified modeling - as in genetics, and population genetics.

This is something the economists aspiring to be called "scientists" might wish to further study.
Posted by Copernicus at 10:17 AM