The Invention of "HELL" 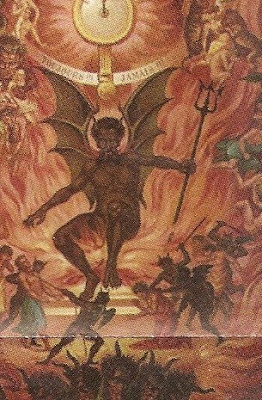 Above: One of the early renditions of Satan and "Hell" used to drive people into the Church's arms. Most intelligent people today know Hell is a dastardly myth designed for mind control.

In the 21st century one would have thought that the last vestiges of toxic superstitious mind rot would have long since expired. But evidently this is not the case. The desire for control and enslavement of minds is too powerful and too attractive to let go. Rational arguments to simply adopt a position of belief acceptance don’t go nearly as far as needed, when strong counter arguments negate them. So …the only thing left for assorted extremist “Christians” to invoke is the fear of Hell.

Oh, “HELL IS A REAL PLACE!” they screech, “Make no mistake!” However, the folly of it all is they’re making a colossal mistake. Hell was never real, and NEVER the original teaching of the early Church. It was an invention, devised at the 2nd Council of Constantinople and then elaborated on through history – using actual literary works (such as Dante’s ‘Inferno”)

One of the things we had to study as students of Theology 200 at Loyola (in 1965) was the origin of Hell. Today, this is mostly glossed over and while millions hear or see the word “Hell” blathered about (as by ignorant ministers and “pastors”) they are unaware of the origin. But people need to understand that merely because a word appears in print doesn't mean it has any validity behind it. Sir Bertrand Russell, in his book Why I Am Not A Christian, precisely identifies ‘religion’s source of terror’ to account for the hold it has on so many. He notes how fear has been ‘dignified’ by use of this source: the demented hell concept to the point people no longer think it disgraceful[1] . Russell correctly points out that by dignifying fear as a coercive tool to drum people into the fold, religions lose any claim to credibility.

Unknown to most is that the common afterlife teaching (by Clement of Alexandria and Origen of Adamantius) in the early centuries after Christ’s death was metempsychosis. Unlike reincarnation, which metempsychosis is often confused with, the same soul exists and is resurrected in a succession of different human bodies in an evolutionary process. (Ordinary reincarnation, meanwhile, allows for reincarnation also into animal bodies –even after a human incarnation- which metempsychosis does not. The inability of MacDonald's to market beef burgers in India is a direct result of the Hindu proscription against killing cattle- believed to be reincarnations of their ancestors. Daft belief? Maybe! But "Hell" is even more daft, plus derelict!)

The Christian metempsychosis teaching probably endured for at least 500 years before later Church fathers decided that it gave men too much time to seek God. Thus, a device had to be used to spur on redemption and put the pressure on. The device decided on was “Hell”.

Now, recall this was around 400 A.D. and there were NO evangelicals skulking around with their KJVs in hand back then. There was only ONE Church, one religion – the Catholic one. So anything that later accrued or occurred had to have been COPIED from these early times, Church teachings, Doctrines. Thus, any claims by evanglicals to being "original" in anything - especially their acceptance of "Hell" - is pure lies and balderdash.

The tack for inventing Hell was to take certain passages in the then Latin Vulgate that referred to “Gehenna” – which was really a dump for burning offal outside Jerusalem, and amp that burning pit into an everlasting abode for punishment. What better way to punish than by fire, which is about the most painful – as anyone who’s ever touched a red hot frying pan or stove knows!

Thus, Gehenna became the putative basis for eternal torment at the Council. All teachings to do with metempsychosis were ordered expunged, and any transgressors were to be listed as "heretics". In a firm outline of the properties of Hell, the Council further mandated:
- It become the final abode of eternal punishment for all who rejected the Church's teachings or the Pope's authority
- It include the agency of fire and this fire never be quenched - and further it have the capacity to burn the soul without destroying it permanently (else there'd be no "eternal" aspect)
- Hell be under the governance of "Satan" or Lucifer, with a hierarchy of sub-Devils (Asmodeus, Belial, Pazuzu et al) to administer other punishments
- All non-Catholics because of they're being outside the state of sanctifying grace, to be destined for Hell

The other job mandated by the Council was to insert the words and references to “Hell” into the scriptures and this job was charged to various transcribers, translators. At key points also Jesus had to make the odd reference to it, and to the threat of punishment for those who refused to believe – specifically “accepting” him as Savior (e.g. the bogus John 3: 16) . (This is skewered by Oxford Scholar Geza Vermes - The Authentic Gospel of Jesus- who points out any such belief on Christ's part would have been interpreted as self-idolatry. He never ever referred to himself as "Son of God" only as "Son of Man", nor did he dictate any belief in him. All such references were fraudulent later additions)

In the context of the Hell invention, it was also necessary to erect a whole fantasy story about the background.

The faithful were thus led to believe an actual spiritual war was going on. Beautiful angels are at constant odds with cunning devils, demons and creatures too horrible to imagine. God and his white-feathered friends on one side are battling Satan and his leather-skinned devils on the other side. (Atheists are still waiting for a clip of these battles to be aired on CNN. )

Add in assorted “demons” – largely copied wholesale from ancient pagan legends and beliefs (e.g. Zoroastrianism) – and you even had the basis to populate Hell with its assorted tormentors. Later, diabolical “possession” (and exorcism) was also invented to enhance the fear factor, and other biblical passages altered to reflect it – leaving to the gullible believers to buy into this too.

The stage was set! But was or is it real? NO!

Hell was invented as a control tactic to control minds. As Sponge notes “people don’t need to be born again but to GROW UP. “ The Hell myth is used as a cudgel to drive people into a control system where no one may question any elements of the beliefs.

“Some Churches don’t like people to grow up because you can’t control grown ups. But People need to accept responsibility for themselves and the world”
So true!
[1] Russel, R.: Why I Am Not A Christian, Touchstone Books, p. 54, 1957.

Next - How to Cure Hell Belief
Posted by Copernicus at 8:13 AM

You've made some excellent points to show that the doctrine of Hell was inserted into Christianity long after Jesus died on the cross.

I've actually written an entire book on this topic--Hell? No! Why You Can Be Certain There's No Such Place As Hell, (for anyone interested, you can get a free ecopy of Did Jesus Believe in Hell?, one of the most compelling chapters in my book at www.thereisnohell.com), but if I may, I'd just like to add one more point from my book to go with the many good ones you've already made.

If one is willing to look, there's substantial evidence contained in the gospels to show that Jesus opposed the idea of Hell. For example, in Luke 9:51-56, is a story about his great disappointment with his disciples when they actually suggested imploring God to rain FIRE on a village just because they had rejected him. His response: "You don't know what spirit is inspiring this kind of talk!" Presumably, it was NOT the Holy Spirit. He went on, trying to explain how he had come to save, heal and relieve suffering, not be the CAUSE of it.

So it only stands to reason that this same Jesus, who was appalled at the very idea of burning a few people, for a few horrific minutes until they were dead, could never, ever burn BILLIONS of people for an ETERNITY!

True, there are a few statements that made their way into the copies of copies of copies of the gospel texts which place “Hell” on Jesus’ lips, but these adulterations came along many decades after his death, most likely due to the Church filling up with Greeks who imported their belief in Hades with them when they converted.

Bear in mind that the historical Protestant doctrine of the inspiration of the Scriptures applies only to the original autographs, not the copies. But sadly, the interpolations that made their way into those copies have provided a convenient excuse for a lot of people to get around following Jesus’ real message.