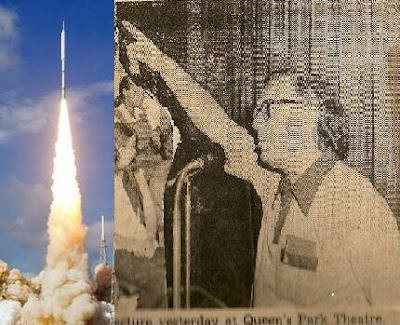 The Ares X-1 (left) in a test flight late in 2009, and Dr. Isaac Asimov in his lecture at Queen's Park Theater in Barbados - warning that humans don't have the luxury not to choose to explore space- and ultimately settle there.

The news that President Obama’s Augustine Commission has recommended that the Constellation program be abandoned is depressing to say the least. To abandon this worthy manned space flight replacement for the Shuttle – for which some $9 billion has already been spent – in order to save $3 billion, makes zero logical or fiscal sense.

Worse, it cedes future manned space flight to the Russians, Chinese and European Union, as the U.S. for the first time in nearly 60 years abdicates. Make no mistake that this abdication is not only an act in time but a symbolic act- which will be interpreted as capitulation as a global leader in the ultimate exploration.

The argument for nixing the Constellation was advanced by Nobel winning physicist Steven Weinberg some weeks ago in a Wall Street Journal op-ed piece. His basic thesis is that the manned space program is not really critical to doing science – such as unmanned craft (like the Mars Spirit Rover) can do, and hence if it’s cut out then more can be done via robotic probes to advance our knowledge.

I have no issue with the logic that robot probes advance our science more, but that doesn’t mean it’s wise to abandon the manned space program. It was Isaac Asimov- in his Barbados lecture at Queen’s Park Theater in 1975 (see my previous blogs on this from July last year- also the attached photo) who said (tape recorded at time):

“Manned space exploration is not an option or a luxury. No sane intelligent species in the cosmos willingly leaves all its ‘eggs’ in one basket, in this case on one planet. Any large asteroid, remember, could take us out with one strike. This could happen in 50 years or in 5,000 or 500,000. It doesn’t matter when, it will be the end of humanity if we choose to never explore and disperse ourselves….for our own protection”

The first time I heard this it made eminent sense, and it does so now. It is hubris of the first order to believe that we can just “scotch” on this Earth, and never fret that we face no threats of extinction. A Torino-scale 10 asteroid, with a size on the order of just a quarter the asteroid Ceres would utterly destroy the human species and leave not a trace. Within the hour or so of its major interaction, all life on Earth would cease. The utter folly of never having extended ourselves to locate an alternate abode would become quite evident. But by then it would be way too late!

Even a Torino-9 asteroid would render most human life extinct as a result of the effects of a nuclear winter scenario: so many trillions of dust hurled into the atmosphere from the obliterating impact that sunlight would be reduced and a suffocating winter lasting decades ensue – with death of most plant life.

With that extirpation, any remaining human life would certainly follow.

The Constellation program has been devised by some of the best space minds and represents a cheaper, more efficient way to get us back to the Moon, and by 2020. While the Apollo program originally got us there, the last Moon landing occurred nearly a generation ago. It was as if we did it for show, and then abandoned the spade work – as in proceeding further to set up lunar bases. Alas, the $270 odd billion squandered on the undeclared Vietnam War put an end to those aspirations. (Just as ending the stupid Afghan involvement- which we can never win- would allow billions for space exploration!)

It’s time now to renew the manned space mission, specifically the Constellation program- and get serious. We NEED a manned lunar base as a stepping stone to Mars and more distant worlds. Retreating and simply playing it cautiously to remain on Earth and use robotic probes for scientific missions is myopic and counter-productive.

If we could afford to give hundreds of billions to the smarmy banks and their financial insurance “relatives” like AIG, we can damned well afford to part with the necessary billions to keep the Constellation program going – and get our asses in gear, and finally out of near Earth orbit.

The long term survival of Homo Sapiens may depend upon it! And further, if we decline to do this, we could as well shuck the last term in that species' designation!
Footnote: Some in NASA and in the Augustine Commission have opined that private contractors can get the Constellation mission - or related one to Mars- going. But this is shortsighted, daft and dumb. It is government alone that can commandeer and garner the resources needed for extended space exploration. Commercial enterprises simply don't have them - much as they didn't have them to extricate the nation from the financial collapse. GOVERNMENT had to respond, as it has to take the banner now!
Posted by Copernicus at 11:31 AM