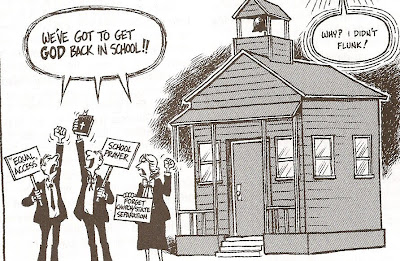 In a 1993 essay for The Baltimore Sun, entitled ‘Games Fundies Like to Play’ I presented the whole gamut that the enterprising atheist can expect in any debates. The piece was originally done for the Washington Area Secular Humanists (WASH) Magazine-in the hope that more atheists and humanists would take on debate challenges from Christians- especially of the fundamentalist stripe.

Of course, most choose not to do this because as one WASH member put it, “It’s too damned easy like shooting fish in a barrel. They’re all idiots!”

Well, he may have a point, given the best and most sophisticated, wide ranging and intellectual debates I’ve had were never with fundagelicals. The two best were with an Anglican priest in Barbados, in 1983, and with a Christian colleague at Harrison college in 1991. The best ever online exchange I ever had was with a self-proclaimed Deist – “SJR” – on the AARP Message boards over 2007-08. In all these cases, intellectual knives were sharpened but were based on standard logical rules, accepted manner of debates – not just ad hominem, or changing the meaning of words or use of REAL strawmen.

But as I pointed out to the WASH member, despite the fact he may feel the fundies are “idiots” the fact is they are gaining more and more converts every day. In some places in Latin America their rates of conversion now exceed that of Roman Catholics – who historically had the biggest hold on the populations. Hence, even if we consider them “idiots” – we need to show their tripe is irredeemable rubbish – not just say it is.

Now, let’s look at some of their games:

This one simply discloses the abject ignorance of most fundagelicals in respect of how little they know about the differing scientific disciplines:: Who makes them up or what they publish. In a way, it’s a tragedy, because this sort of information on quality of research- including cross-citations- can be found anyplace with merely minimal effort.

The lead-in is fairly standard and generally ensues when the debating atheist notes the statistical incidence of atheists in various disciplines – from biology to physics to astronomy. The Fundie then responds that HE has them too on HIS side, and proceeds to reel off assorted names like Duane Gish, of the Creation Research Institute, and the assorted ideologues at Discovery Institute, and odd "astronomers". (Like one who recently challenged the Big Bang)

As if merely naming these jokers levels the playing field. In fact, not! Because all the atheist need do is point to the different quality of research – and ask the Fundie opponent exactly WHICH major peer-reviewed journals has the “scientist” been published in? As far as I have been able to ascertain they are published in ZERO. They are published in their own internally circulated magazines, but these are not peer-reviewed, professional journals (e.g. The Journal of Theoretical Biology, or The Astrophysical Journal)!

Of course, the Fundie hopes his scheme will work based on the ignorance of his audience. (Which is why in an earlier blog I noted that the success in a debate often depends on the quality of the audience) . This implies an audience: a) unaware of the diversity of scientific research areas, and b) unaware of the extent to which practicing scientists in these areas are atheist or agnostic.

2) “I know your evidence but you don’t know mine”

This one is almost laughable, and probably one reason why most secularists take Fundies to be morons. The general theme is this: “We (Fundies) are familiar with YOUR Old Earth evidence but you guys aren’t au fait with our YOUNG Earth evidence”

The truth of the matter is most Fundies are NOT familiar with our evidence! What they do is read one or two books in which OUR evidence is interpreted by THEIR writers (like Michael Behe or William J. Dembski). They do NOT obtain our books or scientific papers, and hence don’t truly understand where we are coming from. (I doubt that one fundie in 1 million, for example, has actually sat down and READ Charles Darwin's Origin of Species, as opposed to reading a book by another fundie about it!)

Further, most Fundagelicals aren’t equipped to understand the evidence because they’ve never even taken a basic high school physics course.

A simple basic question in radioactive dating proves it, and all one need do is present it to a Fundie opponent. IF he can work it out he at least knows enough to be able to see how radio-isotope dating works, if not, he knows nothing.(Because IF he did know radio-isotope dating, he’d realize that it disproves the “young Earth” hypothesis)

Thus: let a 1g sample of a radioactive isotope decay in 150 days to 1/8 gram, what is its half life:? A person who understands the principle would be able to work it out in his head within two minutes, or less: 50 days.

This one is fairly clever, but in the end easily punctured. The ploy is to tell the evolutionist or atheist that the creationist would be “overjoyed to have creationism taught alongside evolution." Well, of COURSE he would! Just like a Holocaust denier would love to have his material taught along side the Holocaust!

If the atheist or evolutionist protests, he’s asked the specious question: “Well, what do you have to fear if your theory is so great?”

As it is, teaching in the U.S. has been gutted and disabled – at least in the public schools, what with all the standardized tests and having to “teach to the test”. Teachers in high schools are barely able to do justice to most of the curricula in the time afforded, after testing drills are subtracted, teaching the material for the basic tests, e.g. English, Math (leaving other subjects like bio unattended)

A standard biology course doesn’t just include lectures and theory but 3 hour LABS! Remember, where you dissect frogs, or do genetic experiments etc.? The semi-educated creationist – who probably never took a full high school science course, has no inkling of this so doesn’t appreciate the intensity and time constraints. To now add an equal dollop of class time for what is essentially pseudo-science would be intolerable and certainly come at the expense of student grades and understanding of standard biological principles.

The claim that “students will hear all the facts” is, of course, baseless, since the creationists have no true facts of their own – only what they’ve found fault with in evolution.

Robert Shapiro, in his book: Origins: A Skeptic’s Guide to the Creation of Life on Earth (p. 257) makes the excellent point:

“All manner of creationists spend their time collecting anomalous results that they believe refutes all or part of evolution- and criticize faulty procedures or logic used by scientists. .. Anomalies, artifacts and deficiencies exist in every scientific field. A certain level is expected, as part of the normal practice of science. However, their existence doesn’t mean the entire field or theory is expendable. Nor can the collected anomalies support the Creationists main idea”
The reason is that simply nit-picking at the perceived defects of a theory does not bestow the nitpicker's complaints with counter-theory status. It would be like me collecting all the faults together for Einstein's general relativity theory but not arriving at my own theory - say using tensor equations that show a different solution.

This game (also a mind game) is one of the fundies’ faves. Creationists often will try to support the literalness and inerrancy of their good Book by asserting every citation and passage is true such as that pertaining to Noah’s Ark. For example, when questioned on how an Ark could possibly save all the extant animals in the world at the time, they will simply reply “well, they pre-determined out the size of the Ark, based on what kinds of animals would be boarded (sea-creatures didn’t, for example), the average size of the animals, and the number that could fit. Most people are surprised to discover how huge the Ark was”

Maybe, but given that even 6,000 years ago there were 12 million species of land animals, for a collective weight of over 14 trillion pounds, it is begging the imagination to visualize ANY Ark that could accommodate them all. (Note we aren’t talking about the 45 or 60 odd creatures shown in fantasy productions, such as ‘The Bible’) Thus, given a needed displacement of 7 billion tons, an ARK would have to be about the size of the state of Mississippi with height half of Mount Everest to contain all the land animals at the time! Just to build such a monstrosity –even assuming all the trees, resources needed were readily available, would consume at least 1 million years – given Noah’s small band of family etc.

In other words the Ark wouldn’t be built in even 20,000 lifetimes! So, it couldn’t be built at all.
The savvy atheist who knows their tactics, will also quickly realize how fast their interpretations are no longer literal when it suits their fancy. For example, when you pull them up on not really espousing "absolute ethics" because they condone the state killing of criminals - they will reply: "Oh, but that 6th commandment can't be literally interpreted to mean "Thou Shalt Not Kill" but "Thou shalt not MURDER!" Thus, they themselves disprove the absolute nature of their ethics, plus the need to literally interpret their precious KJV - all in one fell swoop!

This is a favorite tactic, but one the atheist easily sees through. For example, asserting that evolution is a “popularity contest” meaning we claim its validity based on how many people accept it. Of course, this is arrant rubbish – but typical of the ignorant claptrap we’ve come to expect. In fact, evolution is accepted because it has famously passed all its falsification tests (though most creationists wouldn’t recognize a falsification test if it bit them in the behind). For example, Evolution has predicted that the cytochome-c protein sequence ought to be nearly the same in chimps and humans to support common descent and it does.

The creationist also uses terms indiscriminately, like saying “evolution is just a
theory” when a theory is precisely the highest attained pinnacle in the scientific process – which implies a hypothesis has passed its essential falsification tests and made new predictions that have been confirmed.

The clumsy fundie insists that we (atheists) maintain “evil is good” and “good is evil” but his ignorance has made him so blind and impervious to the foundational principles of atheism – he has no more clue than he has about radio-isotope dating. What we say is that moral truth can be neither absolute nor relative. See also my blog on this issue:


showing a middle way is available via provisional ethics!
In the end, all fundie debate antics and games are easily recognized because they fall more in the realm of circus tricks and entertainment than serious debate. This doesn't mean we ought to ignore them, but at least we give them some passing attention before exposing them for the tomfoolery they are- the domain of the semi-educated, and largely untutored.
Posted by Copernicus at 12:09 PM