Demonic Disease: How Belief in the Satanic turns humans into Satanic beings 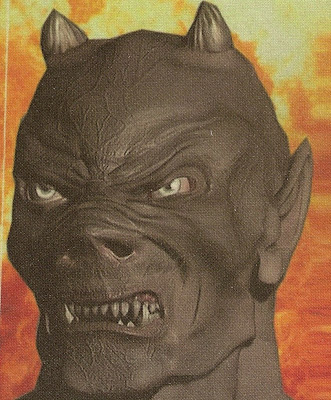 Can a human who overly obsesses about "Satan" himself become a demonic being? Possibly!

It is a curious aspect of the 1608 book ‘Compendium Maleficarum’ by Francesco Maria Guazzo, that though it is ostensibly dedicated to warning of Lucifer’s wiles and modes of entrapping and possessing humans, it also acts as an enabler to Satanic belief and obsession. For example, consider the engraved image on page 35 showing the correct way to kiss the Devil’s ass. A whole three pages are devoted to this and why it is of utmost importance for proper conduct of the Witches’ Sabbat.

The question that arises is: If the Devil is to be detested and avoided, why obsess over how to kiss its butt? Why go into so much gory detail that effectively glorifies the Devil and demonic as opposed to shunning it? The unnerving answer is that those who claim to abhor sin and the Demonic-Satanic actually need them to further their agenda. Where would they be without them?

An earnest reading of the ‘Maleficarum’ also reveals a certain theme of hopelessness, that once a demon has snared a human it is nearly impossible to escape its clutches without dire consequences.

Consider the following passage of the Maleficarum from page 132 (‘Arguments’):

“Once he (the Devil) has acquired power over a man he obstinately guards and retains it, so he does not lose his hold of, or even deny his help to, his bondslave, even when such a one stands bound before the Judge. And the Demon never leaves those who have followed him until they are snatched from him as a lamb from a wolf”

Here we see a glimmer of hope for the demonically-captured, that one grabbed by the Devil can indeed work free of his clutches without undue harm. But then in the next paragraph this hope is summarily dashed:

“But when the Devil foresees such an event, he often drives them by base counsel to take their own lives by hanging themselves, or he actually kills them by twisting their necks, beating them or (unless God prevents him) persuades them to another way of death”

So, there is little hope of escape.

One might believe that taking refuge in an alleged church, shrine or holy place will provide respite, but no such luck!

“He roams about churches, shrines, the cells of anchorites and frequently haunts them”

So he can be anywhere he wants, OR anything – as noted:

“Claudette Simonette and her son were led into a prison for torture when it was observed that a demon in the form a fly buzzed around their temples and repeatedly warned them not to lay bare their crimes by confession …even under duress of the most extreme torture”.

Ultimately, the demonic fly had its way, the witch and warlock never recanted, and so they were burned in a bonfire where they were (presumably) dispatched directly to Hell.

So, Satan can be anywhere or anything. Even a fellow human. Mayhap even a "pastor"!

Here is where the imminent danger of the “Demonic Disease” inheres, in that if a certain person who considers himself very righteous doesn’t like what he sees in the behavior or beliefs of others he can then “demonize” them, meaning turn them into demons or agents of followers of Satan. Once this process is effected, he is under no obligation to respect them, offer any help to them or even refrain from harming them.

The path is paved to go after them while also using them to bang the same drum of false righteousness while warning all and sundry not to fall into the trap of the demonic or Satan.

In this way, we see demonic or Satanic belief acts as a two –way street. It allows the self-righteous to reject others as “demons” all the while they can also use demonic abodes (Hell) to bang their endless religious drums and gain converts to their cause.

Given a new Diagnostic and Statistics Manual (for psychotherapists) is up for scrutiny, we may well inquire if demonic belief is a mental illness? As citizens of the 21st century we ought to be able to offer an unqualified 'Yes!' Numerous papers in psychiatry have shown that people most likely to believe in Satan, or demons, are also most likely to exhibit some kind of mental illness. The most usually cited form is psychosis, which is also often combined with paranoia. But schizoid personality disorder also generates multitudes of hapless people who actually think millions of demons are afoot in the world. The victims believe they're charged with clearing the world of "Satan’s minions" and exposing them wherever they are.

One of the most extreme forms of such behavior, in my memory, occurred in Colorado Springs some five years ago when a 74 year old hyper-religious, KJV -addicted, bible punching granny held her 10 year old son down in boiling water in a bath tub to “drive Satan from his soul”. In fact, all she succeeded in doing is imparting 2nd and 3rd degree burns.

The peak of irony, of course, is by her devout belief and hyper-religious Satan –obsession, the granny had turned herself into the type of “agent of Satan” that she feared. (In other words, IF there were a Satan, which there is not, he would cheer the sort of behavior displayed by the granny).

But as one wends his way through Christian history, one inevitably finds that the worst tortures inflicted by the Inquisition were meted out for "witchery" or communing with the Devil. Very often in these pursuits, pets would be annihilated along with the purported witch or warlock - cats most often, having been tagged as "familiars".

By at least one school of thought, the loss of tens of thousands of 14th, 15th century - felines opened the door to the Black Death which ravaged medieval Europe. Had those cats not been barbecued as Satan's fiendish legions, millions of bubonic plague infected rats might have been terminated and the Black Death might not have spread as far as it did.
Posted by Copernicus at 11:32 AM

Well put. The Satan of Christianity does indeed exist in the minds of the believer. The conclusion I came to in my book Satan Christiainty's Other God, posits that not only does satan not exist but if one believes he effects the universe the way it is claimed he does...then one has a second God in their belief system. Celsus, a second century doctor and philospher pegged the blasphemous Christian belief in Satan as believing in two Gods.

As soon as Christians get rid of their belief in Satan I guarantee he will stop chasing them.

"As soon as Christians get rid of their belief in Satan I guarantee he will stop chasing them."

Wow! That is so absolutely true! It's like the demons and Satan are fabrications of their own brains or minds and they let them chase them beause they continue to bestow reality on them. Like that dopey brother of copernicus named "Pastor Mike".

The guy is so ridiculous I'll be he believes you have breakfast with Satan every morning!