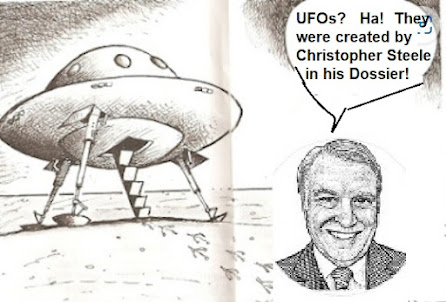 One of the things we've learned about WSJ columnist Holman Jenkins Jr. the past three years is that he's a concerted liar, a Trumpster troll as well as a total incompetent when it comes to certain topics - such as Covid 19, vaccines, and the recent UAP-UFO Intel meetings, reports and related information. Seems Holman now, on trying to process it all, has basically ended up in a position between being a total nihilist and a hyper paranoid conspiracy monger.

"Call it the buildup to a letdown, as the latest of the required intelligence reports to Congress on the UFO question undergoes a prolonged and likely angst-filled vetting before being delivered to the relevant committees.

A month has passed since its leaked contents were detailed in the New York Times, and still the document has not appeared and it’s not hard to guess why. Its findings will be surprising only to those who imbibed previous official disinformation on so-called UAP, or unidentified aerial phenomena. The most credible and widely trumpeted sightings by Navy pilots now are explained as illusions."

But how so?  How does he infer that the sightings of the Navy pilots, see e.g.

are "illusions"?   All he's done is make a bald claim with no support, or any elaboration of his own. And besides, what was he expecting anyway?  Some kind of full disclosure if the sighted UAP (UFOs) were indeed deemed as having an extraterrestrial basis?  We already know the U.S. military and attendant media associates are in denial about any admission of ET reality because that would confer sovereignty which the military as well as intel folks will not accept.  But I've already explained this before in my Oct. 29 post, including why the NY Times author's "trash" and "illusions" bunkum doesn't hold water.

So what's new? And why can't lunkheads like Jenkins Jr. get it right, or even get it partially right? Oh yeah, right! Because they are lunkheads!  In my October post I had cited the paper 'Sovereignty and the UFO'  (see link at bottom) published by Alexander Wendt and Raymond Duvall (Political Theory) where they made the assertion that the UFO tends to be rejected as real because it comes up against the human concept of state sovereignty. Prof. Daniel W. Dresner, in an article appearing in The Sunday Denver Post on June 2, 2019, put it this way:

'UFOs have never been systematically investigated by science or the state, because it is assumed to be known that none are extraterrestrial. Yet in fact this is not known, which makes the UFO taboo puzzling given the ET possibility.  The puzzle is explained by the functional imperatives of anthropocentric sovereignty, which cannot decide a UFO  exception to anthropocentrism  while preserving the ability to make such a decision. The UFO can be known only by not asking what it is."

This is indeed the best, most rational explanation as to why the authorities aren't coming clean but Jenkins can't accept it. Why not?  Well, because his mind-brain is already tinged, burned and betrayed (in his perception) by a host of political "dodges" he believes occurred, traced mainly to his "Russia hoax".  You know, how poor Trump was undermined and betrayed from day one by specious conspiracy ruminations spread from, who else? Hillary Clinton, Fusion GPS, the FBI,  Christopher Steele.  Oh, and the terrible "unmasking" of Trump's 2016 campaign associates, like Carter Page, Mike Flynn et al - in contact with Russkie GRU agents. So hell's bells if the Intel boys could pull the lids over our eyes once, why not do it again with the UFO docs, images etc.?  This is basically Holman's argument in a nutshell.

And alas, I've been over this malarkey before as well e.g.

But in terms of Holman's blather we are greeted by this pitiful excuse for serious reasoning, making one wonder what new form of oxy he's been taking with his shrooms and wine coolers:

"The UFO kerfuffle has much in common with the FBI and intelligence community campaign to promote the false Russia collusion story. It has much in common with the convoluted efforts of former FBI chief James Comey to turn false piffle masquerading as “Russian intelligence” into the secret but widely leaked justification for his improper actions in the Hillary Clinton email case.

Finally the real danger comes into view, and it’s not aliens or even Chinese or Russian possession of super-advanced technology. It’s intelligence officials who think their job includes promoting false and tendentious information to the American public for their own purposes. The representative spy of our time really is Britain’s Christopher Steele, presumably trained by MI6 in both information and disinformation techniques. It was only the latter that he peddled to his private clients, including the FBI and the Clinton campaign, in the collusion hoax."

No, I can't make this B.S. up.   What you are reading above is Holman Jenkins Jr. brain finally run off the rails of any semblance of rationality.  Straight jackets, anyone?  Does Bellevue have space for this paranoid looney tune? Is there enough supply of lithium to bring the lad back to reality?  What about electro-shock apparatus?, e.g. 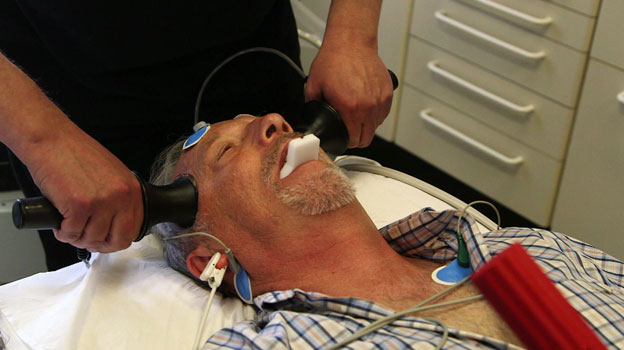 Hope there's no supply shortage issue there! Clearly, Holman is in dire need of some amps.  And no, I won't even attempt to unravel how or why he thinks his two paragraphs of blarney somehow explains UFOs as illusions.  All I can see is a hack WSJ op-ed columnist who's now fallen into a rabbit hole of paranoid psychosis and is likely beyond therapeutic help.   What is almost as worrisome, as a sign of an unhinged mind, is when he babbles that the UFO "smokescreen" is likely being used "to conceal knowledge of Chinese spying techniques".

Huh!?  So he thinks the craft spotted by U.S. military are Chinese spy drones? Drones that can travel at over 13 times the speed of sound, dive under water and emerge again?  He's gotta be hitting some really hard sauce or drugs to be writing that twaddle.  Just my 0.02.

Fortunately, for Holman, his delusional rant may be just the product of mild brain intoxication from reading the latest swill in "Reason" magazine.  In Holman's admission (ibid.):

"Reason magazine, under the headline “The Military-UFO Complex,” points out the suspect incentives behind the alien-visitation racket, which started five years ago with the purported “leak” of pilot videos. The author correctly notes also a “creeping weirdness in the Pentagon” on the subject of unidentified aerial phenomena."

And who was the moron behind that 'Reason' piece? Well, none other than Mick West who I lambasted in my May 20 post, noting:

"Indeed, one clown, Mick West  - actually admitted that alien craft did form  the simplest hypothesis.  But he still has sought to invoke "infrared glare" to account for certain rapid spin motions of UAP showing up on many of the military videos.  Why? Because too many prefer to overthink and concoct outlandish mundane explanations than simply admit humans are not at the top of the cosmic food chain."

Moral of the story? Holman needs to chill, engage his higher brain centers (as opposed to lizard brain) before tackling UAP-UFOs and take more care what manner of garbage he ingests. And just because a topic might appear in a magazine called "Reason" doesn't necessarily mean that reason actually underpins it.

Ask William Buckley about that. At least his assorted old Reason articles!

Transient Optical Phenomena of the Atmosphere - a Case Study

Posted by Copernicus at 7:01 AM