Mensa - Is It Really Full Of Conceited Boors? 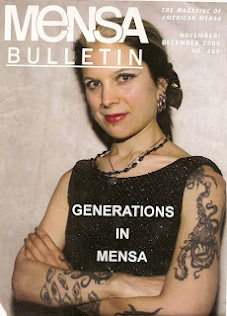 A year ago I noted the horrific attacks on a fellow Mensan, Michelle, featured on the cover of a Mensa Bulletin Issue  (see graphic) with her tats in  full view. In the wake of the cover image, she was mercilessly pilloried- mainly by older Mensans and some of the remarks can be read here: