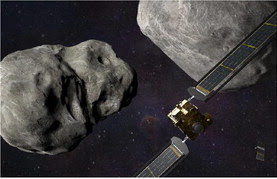 Get set. Seven millions miles away NASA is about to dispatch a 1260 lb. golf cart -sized spacecraft into a 525 ft wide, 11 billion lb. (4.4 x  10 9   kg)  asteroid named Dimorphos. It is actually the 'junior' sidekick of a 2,500foot wide asteroid named Didymos, Greek for twin. Discovered in 1996, Didymos is spinning so rapidly that scientists believe it flung off material that eventually formed the miniature moonlet, Dimorphos

The spacecraft named DART (Double Asteroid Redirection Test) will zero in on the asteroid today,  slamming into it head-on at 14,000 mph. The impact will dig out a crater tens of yards wide and hurl some 2 million pounds of rocks and dirt into space. Theoretically, the impact should be just enough to nudge the smaller asteroid into a slightly tighter orbit around its larger companion. demonstrating that if a killer asteroid ever heads our way, we’d stand a fighting chance of diverting it.

That bears clarification. A "killer" asteroid in the given size, mass context refers to the Torino scale for asteroid impacts. In this case an asteroid the size of Dimorphos falls into the  mass extinction impact:  category with scale 330' to  3330' diameter. The explosive release would be between 100 megatons and 100,000 megatons.  Any deviation caused to the asteroid's path would therefore be a huge finding in terms of an actual future deflection.  But the DART mission gurus put the actual chance of such a deflection happening at less than 10 percent.  Are they being overly conservative? No.

The mission gurus expect deflection as much as “fractions of a millimeter per second”.  What does that mean in real world application terms? Let’s be generous and assume the kinetic collision effect on Dimorphos lasts 1,000 s and assume we have an actual deflection of 0.5 mm/ s.  That translates into a total deflection of one half a meter.    If   q  = s/ R   then given R = 1 AU, and s = 0.5m  the angle deflection from 1 AU distance is:

were considered, where r is the radius vector and F the force supplied. The element of asteroid surface area is dS.  The research condition was confined to the special case where the impinging solar radiation was at right angles to the asteroid’s spin axis.  Three separate detections of the effect were announced, including for  a nearly spherical object (1998 KY), and on two more irregular objects, (1862 Apollo, and 25143 Itokawa).

In the case of the Apollo object the observed effect was approximately 3.0 x 10 -4 deg/day, vs. the theoretically –predicted YORP effect magnitude of 2.6 x 10 -4 deg/day.  This constitutes a real measurable magnitude and deflection for a serious asteroid – given Apollo objects are the most likely to inflict serious devastation on Earth since their orbits intersect Earth's. (Note: The DART deflection cannot be measured in deg/day given the interaction is not predicated on a prolonged deflection like the YORP effect requires.)

More than 90% of potentially hazardous "mountain-size" asteroids have been identified, according to NASA. But only about 40% of potentially hazardous asteroids with diameters of 460 feet or more are believed to have been identified. There may be as many as 25,000 of these smaller asteroids, each of which might lay waste to an entire region - say like Siberia - if it were to strike our planet.

Asteroids 6 miles across or larger, like the one that wiped out most dinosaurs and torched much of the planet about 66 million years ago, are believed to strike only every 15 million years or so.  Interestingly, the Torino scale marker for Dimorphos is in the same "killer" class as the KT-boundar even that took out the dinos.

There is no doubt that if this DART mission were a genuine physically realistic test of an asteroid deflection it would be of immense relevance and  importance. I just doubt that it is.  But who knows?  Maybe when the data arrives from today's encounter maybe we will find a fraction of millimeter change in Dimorphos' path.  The question is:  If an actual asteroid of the same dimensions were headed for Earth would that deflection be enough to save us?

To be fair though, the Johns Hopkins lab took a minimalist approach in developing DART, given that it’s essentially a battering ram and faces certain destruction. Hence, there is no finesse involved such as using the YORP effect requires. Whatever happens it should be interesting and provide no end of astrodynamic grist for future kindred missions.

For now the description of the mission as a test of planetary defense is a bit of a stretch. But in any case irrespective of what transpires, we won't have the final data for "a few months" according to the NASA mission cognoscenti. Still, hit or miss, we "will still have learned  few things from DART."  Well, I hope so!

The DART impact with the asteroid Dimorphos successfully occurred at 7: 14 p.m. EDT, and was greeted by cheers from the mission team in Laurel, Maryland.  This according to a Financial Times report last night.  Now the data must be processed from the collision to determine if there was, in fact, an effect that translates into successful deflection.