"A Nation Of Quitters"? Methinks WSJ's Andy Kessler Doesn't Have The Complete Picture. 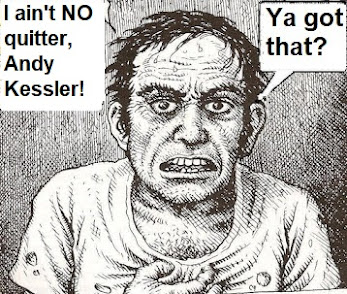 The WSJ columnist Andy Kessler is on the warpath against "quitters"  ('A Nation of Quitters',  p. A15, Sept. 26).  Specifically he wants to know 'Where did everyone go?' And he's demanding all unemployed guys ages 25 to 54 get off their keysters and stop playing 'Fall Guys' 15 hours a day.  Oh, and binge watching the new 'Power of the Ring' series on Amazon Prime.  Nope, Kessler would rather these "quitters" and "under-achievers" (i.e. bums) get up, get out and actually work in an Amazon warehouse.  There they would have to wear Depends as they race back and forth under Bezos' all -seeing electronic monitors that count every movement and pause. No time for bathroom breaks, as Heike Geissler, whose book (Seasonal Associate) exposed, including the frenzied work pace after one particular day of drudgery, e.g.

"You replace the Band Aids on your hands. Your thumbs, forefingers, middle fingers  on both hands now have long hangnails from all the reaching into totes and boxes and from cutting and folding cardboard. Harmless irritations but they make every movement harder."

But Andy Kessler is unimpressed as he writes:

"The unemployment rate was 3.5% in July, the same as in February 2020, but the U.S. has three million fewer workers. Where did everyone go? This in an economy with 11.2 million job openings. It’s mostly men 25 to 54 who haven’t come back to work. Now a McKinsey study suggests that 40% of workers are thinking of quitting their jobs. Does anyone want to work anymore?"

Well, maybe they do, but not in the severe corporate conditions exposed -  with spying on their every movement and using digital productivity algorithms to track every keyboard entry.  Also, not if  - say under Amazon's merciless electronic tracker - every hour is "spent forcing hapless, low paid 'pickers' to spring down cavernous stacks of consumer stuff to fill online orders, pronto." (In the words of columnist Jim Hightower, 'The Reality of Worker Hell', COS Indy)  No wonder these guys want no part of it, realizing they'd be hard- pressed to even take five minutes for a dump - without being docked 50 bucks or put on notice for goldbricking.  Or worse, it might well be seen as a form of “quiet quitting” which has also been portrayed on this  TikTok.

"Everyone has an explanation for the Great Resignation: extended unemployment benefits, eviction moratoriums, baby boomers retiring, work-from-home complacency, anxiety, long Covid.  Sure, all are reasonable excuses. Here’s my theory: Too many got a taste of not working and liked it. A lot. Until recently, many people could make more money by not working and became glued to screens, Insta- TikTok-ing and living the easy life by sponging off the rest of us. What’s not to like? "

Hey, whoa there, Bub!  Can you prove all that blarney? How do you know these guys are all 'glued to screens' or 'Tik-Toking?'   They might be off on gig jobs in between chilling at home, but these go unreported in Labor Dept. stats.   Maybe poor Andy missed the well-researched WSJ op-ed from Dan Alman ('See No Labor', p. A17) that these "absent" workers  (6 million according to Alman) didn't just “vanish” from the labor force.  As Alman wrote:

"They didn’t just vanish. Many found ways of working that expose a blind spot in government policy while transforming the economy. They signed up for flexible working apps such as DoorDash, Amazon Flex, Trusted Health and the one from my company, Instawork— apps that match hourly workers with local businesses on a shift-by-shift or task to task basis."

The problem, as Alman pointed out, is that Trump's Labor Dept. had not been publishing any stats on flexible work, despite the Instawork app popularity.

Kessler at it again in his rant:

"What’s not to like? Parisians called those with unconventional lifestyles “Bohemians.” Now we have unemployed, perpetually plugged-in, dopamine-addled Cyber Bohemians—let’s call them Cy-Bros. Before you send me hate mail, I’m only talking about the underachievers, including those who traded crypto and NFTs and lost all their stimulus and unemployment money after the crypto crash. Now Cy-Bros, with nothing better to do, are streaming away, including the first five of an eventual 50 hours of Amazon’s new “Lord of the Rings” show. ....I’ve also discovered that a huge idle couch-bound class spends its days playing the battle-royale videogame “Fall Guys,” the latest craze, with 50 million players. It’s nonviolent, almost cuddly, and—be warned—ridiculously addictive fun."

Hey, Kessler, maybe they are just between gig jobs. And how do you know they're spending "50 hours a week" watching Amazon's new series.  Oh wait, his important qualifier was "eventual"  so that by the end of the series this year it may amount to a total of 50 hours. Well, wifey and I have been watching it and so far it's barely 1 hour each for the first 4 episodes, a total of 4 hours over 4 weeks.  That's nothing.  But the way Gessler portrays it, it's like they're all glued to screens.

Let's also bear in mind there is a component of people - mainly males, true  - who are just tired of the 9 to 6 daily grind in one place - whether office or warehouse. Especially when it means constant electronic monitoring of all they do - or don't do.  I mean consider this fact: Delivery drivers and warehouse workers are already tracked relentlessly. Ditto now for Kroger cashiers, UPS drivers and millions of others.  White-collar freelancers like designers, writers, copyeditors, transcribers and other office workers are often asked to use “time management programs” that not only track down to the second how long you work on a task but will detect and deduct “lag time” by monitoring whether your keyboard or trackpad is being used.  Eight of the 10 largest private U.S. employers track the productivity metrics of individual workers, many in real time, according to an examination by The New York Times

This relentless tracking, the HR Dept. will tell you, is to make sure that the contractor who is probably already underpaying you doesn’t have to pay for the three minutes you went to the bathroom.  After all, you are only paid for the hours and minutes the assorted electronic monitors and computers see you in action. Why pay a minister for "counseling" if there's little actual action recorded, only blabbing?  Why pay an oncologist if all the monitor detects is him yakking to a patient? Many employees, whether working remotely or in person, are subject to trackers, scores, “idle” buttons and other means for constantly accumulating and assessing "work" records. Any pauses can lead to penalties, from lost pay to lost jobs. (Some radiologists in the midst of reading x-rays, CT-scans etc. can see scoreboards showing their “inactivity” time by the minute.)

If anything, this kind of software forces workers to make constant useless gestures toward productivity – banging arrow keys and swirling cursors around just to keep their pay from being docked.  And lord help you if a honcho happens to catch you with eyes closed! "Can't stay awake there, fella?"  So it's little wonder the phenomenon of quiet quitting has exploded, as well as the inclination not to want to be under the thumb of these slave drivers 40 hours a week or more.

What's more, the pernicious corporate paranoia embodied in the tracking obsession has now spread like a virus to other workers. Architects, academic administrators, doctors, nursing home workers and lawyers described growing electronic surveillance over every minute of their workday. They echoed complaints that employees in many lower-paid positions have voiced for years: that their jobs are relentless, that they don’t have control — and in some cases, that they don’t even have enough time to use the bathroom

So the men targeted in Kessler's caustic diatribe are not "quitters", they are mainly just trying to reclaim a measure of their humanity. Effectively sending the message to the Corporatocracy that 'we will no longer be your mechano-bots or slaves'.     It's easy for Andy Kessler and the other complaining WSJ hacks (e.g. Kim Strassel, Holman Jenkins Jr., Dan Henninger) to write their attack lines while sitting in cool, air-conditioned comfort.  And so so while pulling down a half mil a year each for spouting opinions. But one wonders how these morons would fare in an Amazon warehouse racing to sort, shuffle and pack dozens of items every hour in non - a/c conditions.

Until each of these trolls can work one whole day doing the job of a Heike Geissler (and not using Depends either), they need to put a sock in it.

Gen Z workers demand flexibility, don’t want to be stuffed in a cubicle