As much as it pains me to write this, LA Times columnist David L. Ulin is absolutely spot on in his column yesterday ('We have nothing to fear but fund raising emails'.)  As he notes:

"James Carville needs to lose my email address. Tim Ryan and Beto O'Rourke need to stop texting me. I can't take it any more. ... This is not the time for fear mongering, this is the time to stand up."

Well, it is the time for some fear mongering, but not in the guise of a daily barrage of pleading, histrionic emails such as the sample below:

We’ve begged. We’ve pleaded. We’ve been reaching out for WEEKS about how important it is to elect Beto O’Rourke and flip Texas BLUE.

Now we’re asking once more: Can you chip in just $5 before our end of quarter deadline? →

And also from others I show  - which I just got done deleting.  (N.B.  'Pausing emails doesn't seem to work.) What is also funny is how Mr. Ulin experienced the same reaction from  D-candidate Tim Ryan's fundraisers as I did from John Fetterman's.  Ulin wrote:

"Earlier this year I made a donation to his campaign, now I hear from him more than from my kids."

I donated to Fetterman's campaign in Pennsylvania because I believe we need his common sense and working man's attitude in the U.S. Senate, not the effete balderdash of a Dr. Mehmet Oz.  But now I hear from John (or rather his PAC) almost every day pleading for even more money. Message to Dem PACs and candidates: if you're not careful, this kind of torrential pleading and whining could backfire. Which is the last thing we need.

Thus, Mr. Ulin is correct that we need a better fund-raising strategy than one based upon a "five alarm fire".

I mean, look, we know there will be hell to pay for this nation if the GOOPs get back into power. I mean they, or rather Rick Scott and Ron Johnson, have already vowed to subject Social Security to a budgetary process every 5 years.  Which means if it succeeds once, it could end up being cut permanently. Many voters, so mind-fucked by soaring egg prices aren't even aware of the bigger threats to their financial security including the Reep plans to cut food stamps to pay for tax cuts. Oh, and cutting Obamacare once and for all heralding a return to pre-existing conditions being blocked from any new health insurances schemes. And yet, incredibly, 47% of voters in a Sept. 13 NBC poll believe the GOP will be better at addressing inflation and the economy (compared to 28% for Democrats). One wonders what they are drinking, chewing or smoking.

I get that some contact with voters- via email or tweets, texts - can be useful in securing donations, especially incorporating a dollop of fear.   And also especially when clarity of thought may be a casualty in a high inflation environment.  But there is such a thing as overkill.

So we don't need to see or hear this continually each time we go to our emails, or phones.  Thus, I side with Ulin in making a plea to Dems  and their PACs super PACs for resilience over fear.  Turn down the hysterical 'dial' because it will not impel me to donate one buck more.  And besides, in his Real Time appearance on Friday night, Michael Moore did predict a victory for Dems in keeping majorities in both houses of congress.  That is provided we get our friends, neighbors and other out to vote for the sane side.  That to me, is worth 10,000 fear stoking emails.  Anyway,  further samples below of what I've been facing for the past month, and why I am begging the senders to cease and desist. 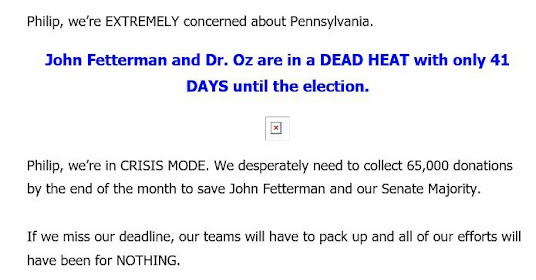