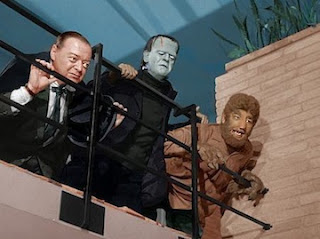 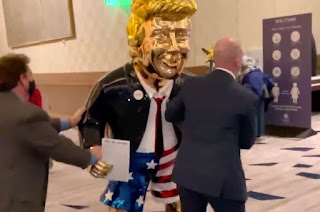 "Lookee!   Our god Trump is bein' rolled out to worship!"

The clown and Trump adoration show at CPAC in Orlando got off to a thundering roar when Trumpie stooge Pete Hegseth opened the fanfare by screaming: "Don't forget what we are fighting for! God, country and flag!"    But then, when one beheld the golden statue of Trump being wheeled around inside the cavernous space, one grokked that was all B.S.

The assembled multitude was really there to worship the golden idol of Trump and praise the insurrection of January 6th.

That CPAC   (Conservative Political Action Conference) is now dedicated to obeisance. asslicking and worship of  Donald Trump  is beyond doubt. In only a few clips from FOX News on Saturday one watched spellbound and in disbelief as dozens of speakers declared their fealty to the orange pestilence even as hundreds of attendees posed for selfies with a golden statue of his likeness.  The analogy to the "golden calf" idol worhipped by the Israelites in biblical lore could not be missed.

Indeed, Sen. Josh Hawley, R-Mo., another potential 2024 hopeful, drew among the loudest applause and a standing ovation when he bragged about his role in sedition, challenging the election certification on Jan. 6.  And doing this despite the storming of the Capitol by Trump supporters trying to halt the process.

Hawley's and Cruz' display of  groveling sycophancy  comes as no surprise given the prominence of the golden Trump idol.  Which, btw, inspired jokes and political commentary of biblical proportions across social media on Friday. Many called out conservatives for worshiping a “false idol” by continuing to follow a criminal traitor  who was impeached twice.  Also, a sore loser who has undermined the U.S. presidential election process by pushing debunked, baseless claims that an election he claimed to have won handily had been stolen from him, even as President Joe Biden racked up 7,058,909 more votes.

Which even a recent WSJ editorial conceded ('Trump Lost To Himself',  Feb. 18, p. A13) citing Trump's own pollster Tony Fabriozo who reported (ibid.): "Trump lost largely due to a massive swing among independents and erosion among Republicans."

Ultimately, the swing was due to millions more voters simply having had enough of Trump's chaos, Twitter attacks and other unhinged antics.  The WSJ editorial itself adding: "The former president lost ground with nearly every age group across the states where coronavirus was the top voter issue."

Yet in his 1 1/2  hour appearance Sunday afternoon he refined and amplified his false losing claims by tossing out political bromides and past trends as if these were proof he had to have won.  For example, "No candidate who won both Florida and Ohio ever lost an election before!" Well, there was always the first time, sonny!

Again all this shows that Friday FOX contributor Jessica Tarlov hit the nail on the head when she said this was merely a "red meat" event.  It was tossing red meat in the form of lies and grievance in spades to the delirious base, while renouncing reality.  No wonder Ms. Tarlov-  the only honest commentator on FOX -  could conclude  that CPAC featured all the hallmarks of a cult celebration, especially with the golden statue of Trump being wheeled around.  Good for her also for blistering assorted CPAC stooges for claiming "the Dems have no one as popular as Trump" and that "the Democrats are not religious!"

In regard to the last, Ms. Tarlov cited Joe Biden's devout Roman Catholicism and an ability to quote the bible "without being spoon fed like Trump." She also noted, consistent with religious doctrines, the new president had actually been tested by terrible loss and trials in his life - including the loss of his first wife and a child in a horrific 1978 car accident.  This is something "Trump knows nothing of."  Why would he when all he's done is lied, cheated and grifted his entire con man life?

But Ms. Tarlov's most potent observation was in respect to Trump's followers and the CPAC faithful who'd surrendered their brains and will en masse.  She noted how they still embraced the bald faced lies about the election and put Trump on a worship pedestal - what with the "golden idol being wheeled all around."

FOX commentator Karl Rove on Sunday also made an astute observation based on a straw poll taken at the conference.  That is, that even in this "Trumpiest of places" Trump only got 55% endorsing another campaign run in 2024.  (Though this is nearly coincident with the "half of Trump voters in a Suffolk University/USA Today poll who thought the GOP should be "more loyal to Trump" )

As Rove said: "Unless he comes up with a new policy agenda and a definite vision there won't be a realistic path to being a second time winner."

Trump's pathetic speech - which even the FOX crew complained "lacked energy"-  proved he doesn't have it and in 3 1/2 more years will be even more a hollow shell of the loser he is now.

Which brings up the question of what the Republicans even stand for if they are so far up Dotard's 'golden' ass most can't see reality?  Is it merely to glorify Trump in all his pestilential aspects?  To blindly do his bidding, and to celebrate his insurrection? Do they even have one original idea or concept of actual governance? Say apart from trolling Dems, grievance grousing  and playing the Lee Greenwood ditty 'Proud to be an American',   when real ones don't commit- or celebrate-  insurrection?

Not according to Financial Times columnist Simon Kuper ('Do Republicans Even Want Government To Exist?') who noted:

"Republican officials are now asking themselves: what do we want from a Democratic-run government when defence no longer matters much? Their answer: almost nothing. They didn’t even put together an infrastructure bill under Trump, although the government could get paid for borrowing money. Republicans in Washington and state capitals mostly stood by while Covid-19 killed more than 500,000 Americans. In Texas this month, Republicans couldn’t even lay on power and drinking water.

Only when a catastrophe affects Republican voters will the office holders suddenly pony up fortunes: after Hurricane Katrina, after the financial crisis and after Covid-19 sank the economy. In George W Bush’s words: “When somebody hurts, government has got to move.” As a governing philosophy, this is like living in a straw house and rebuilding it every time the wolf blows it down. Otherwise, the only branch of federal government the Republicans treasure is the judiciary, because it’s the only one they expect to control, through their advantage in the Senate."

This is serious stuff but shows how far the current GOP has retreated from being an active and responsible political party invested in governing to a deranged outlier only interested in pursuing raw power.  The latter confirmed now as per a recent report by the Brennan Center for Justice which points out:
"Thus far this year, thirty-three states have introduced, prefiled, or carried over 165 bills to restrict voting access. These proposals primarily seek to: (1) limit mail voting access; (2) impose stricter voter ID requirements; (3) slash voter registration opportunities; and (4) enable more aggressive voter roll purges. These bills are an unmistakable response to the unfounded and dangerous lies about fraud that followed the 2020 election.”
Indeed, one can argue cogently the Trump GOP has now mutated into a cult, complete with golden idol of the one worshipped.  The followers, including CPAC participants-   now effectively cult members or de facto zombies - merely carrying out the cult leader's dictates.   Their speech and behavior at the weekend conference totally supports this conjecture.  Or as Tim O'Brien, former Trump ghost writer put it; "They are only interested now in spreading lies and disinformation to get and keep power."
Also, if true, it means thousands of these followers, CPAC Trump idolaters and their lackeys,  are in desperate need of deprogramming in order to become useful citizens again - as opposed to carriers of an infectious and pathological mind virus.   A mind virus so infernal that now- even two months after the insurrection- more than half of Trump voters in a Suffolk University/USA Today poll said that the riot was “mostly an Antifa-inspired attack.”
This was after this nutso idiocy was confected by assorted right wing radio jocks then picked up on the Twitter stream by FOX News (e.g. Laura Ingraham)  and its allies (e.g. Sarah Palin) - adding this lie to the Big lie that the election was stolen from Trump.  The hilarious aspect of this farcical claim is it had Trump's own MAGA terror apes screaming that the Right's media dolts had the "wrong guys".  It was the MAGA crowd -  not Antifa -  who were the real "patriots" breaking into the Capitol.  No, you can't make this codswallop up.
One is reminded here of India Oxenberg's months of deprogramming from the NXIVM cult, in order to even partially regain her critical thinking capacity.  This as revealed in the recent NBC Dateline special.   By all accounts and estimates the victims of the Trump cult will require even more intense intervention (including medications and ECT)  than Ms.Oxenberg- and perhaps lasting years instead of months.   In this guise they will more resemble the few survivors of the Jim Jones cult who needed years of deprogramming and therapy to get their brains and sense back.
What did CPAC show then, to summarize?  It showed a significant portion of this nation is totally locked into lies, disinformation and the most toxic political propaganda.  And to that extent also shows this country will remain bitterly divided because - as I've noted before - there is no way in hell one can make compromise or common cause with insanity.   That insanity includes any talk of "bipartisanship" emanating from the assorted pro-Trump insurrectionists embedded in both  the House and Senate.
See also:
CPAC: The Big Lie’s Megaphone
by Heather Cox Richardson | March 3, 2021 - 7:52am | permalink

William Kristol wrote in The Bulwark what a number of us have been saying for a while now, and it dovetails cleanly with the current Republican attempt to suppress voting.

Kristol warns that our democracy is in crisis. For the first time in our history, we have failed to have a peaceful transfer of power. The Republican Party launched a coup — which fortunately failed — and “now claims that the current administration is illegitimately elected, the result of massive, coordinated fraud. The logical extension of this position would seem to be that the American constitutional order deserving of our allegiance no longer exists.”

“So,” he notes, “we are at the edge of crisis, having repulsed one attempted authoritarian power grab and bracing for another.”

At the Conservative Political Action Committee (CPAC) conference this weekend in Orlando, Florida, Trump supporters doubled down on the lie that Biden stole the 2020 election. From a stage shaped like a piece of Nazi insignia, speakers raged that they were victims of “cancel culture” on the part of Big Tech and the left, which are allegedly trying to silence them. To restore fairness, they want to stop “voter fraud” and restore “election integrity,” and they want to force social media giants to let them say whatever they want on social media.

In the Washington Post, commentator Jennifer Rubin said the modern conservatives at CPAC had no policy but revenge, “resentment, cult worship and racism,” and no political goal but voter suppression. It is “the only means by which they seek to capture power in an increasingly diverse America,”

And:
Democrats | Donald Trump | Republicans
Why Trump’s Takeover of the GOP is Great for Biden and the Democrats (but a Potential Disaster for America)
by Robert Reich | March 1, 2021 - 7:23am | permalink 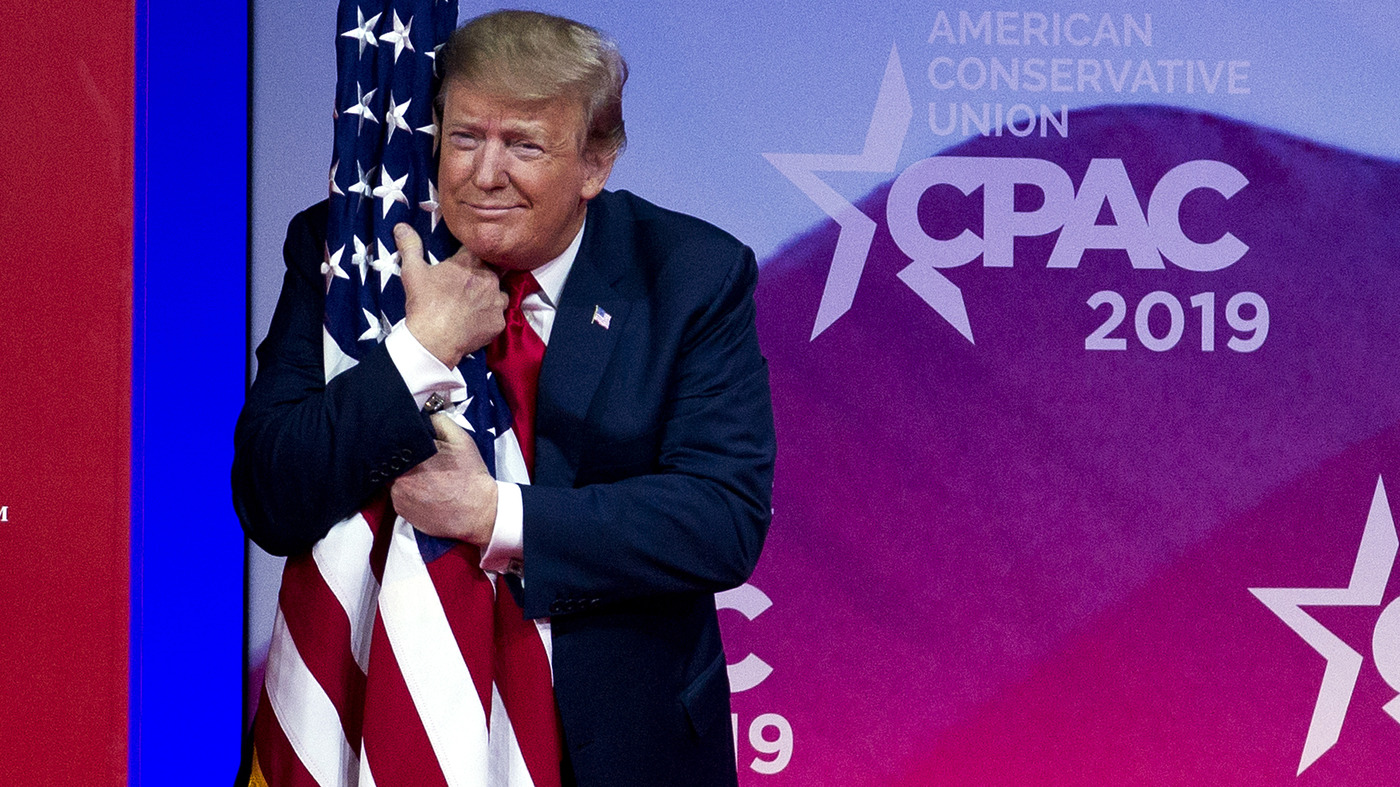 And:
Election Integrity | Republicans
Voter Suppression Is The Only Policy Agenda Left for a White Christian Identity Party
by David Atkins | March 1, 2021 - 7:05am | permalink

Posted by Copernicus at 7:08 AM