Can We Please Lose The Hysteria Over The "Baby Bust"? 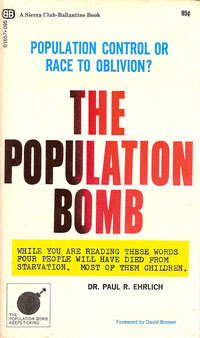 Leave it to the corporate media in a pandemic to raise new scare stories as if people don't already have enough to fret over.  Now, as shown on CBS yesterday morning, it's new data  confirming a "baby bust." .  This is based on "health departments in more than two dozen states providing records to CBS News, showing a 7% drop in births in December — nine months after the first lockdowns began. "

According to CBS co-host Tony Dokoupil.

"Researchers say it continues a much bigger plunge in fertility in recent decades.

The number of babies the average woman in the U.S. is expected to deliver has dropped from nearly four in the 1950s to less than two today. "

But let's also process here that in the 1950s there were HALF the number of people living in the U.S. as there are now.    Hence, women having half the number of babies now makes an eminent kind of ecological (and logical)  sense.   Why double the population when the population has already doubled?  It makes no sense.

Dokoupil.  claimed  the drop "could present an entirely different risk to society than one that was first warned about decades ago — when an apocalyptic fear gripped America in the 1960s and 1970s."

The problem is that "apocalyptic fear"  was valid and  remains as  real as a heart attack. It's just that it was about a century ahead of its time  - as then propounded by Paul Ehrlich in The Population Bomb.   As Walter Cronkite was recorded saying in a 1970 CBS News broadcast:

"The stakes in this battle are far greater than any other we have ever fought.  The experts we interviewed told us population was the fundamental crisis."

Cronkite was correct and so was Ehrlich when he said (in a 1970 broadcast) that  humans face:   "An utter breakdown of the capacity of the planet to support humanity,"

This is most recently  illustrated  in the concept of Earth overshoot, as embodied in the graphic below which shows humans are currently consuming the equivalent resources of 1.6 EARTHS per year, e.g. 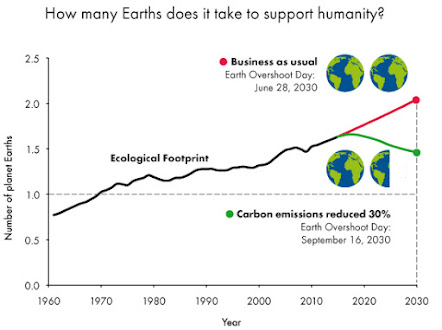 The interpretation of the graph (upward) is straightforward. By June, 2030 TWO full Earths - that is the resources therein - will be needed to support the then population. Already we are at 1.6 Earths. Every year Global Footprint Network raises awareness about global ecological overshoot with its Earth Overshoot Day campaign. Earth Overshoot Day is the day on the calendar when humanity has used up the resources that it takes the planet the full year to regenerate.

What is all of this telling us?  Easy!  We do not NEED any more people on this planet! Or...in the US of A.

It helps to get some concrete stats to register this overshoot:

-  Every day humans permanently remove 3.2 billion gallons more water from aquifers than nature can replace. - U.S. consumption of energy grows every day despite efforts to conserve it.  This is important because each energy use is accompanied by entropy or degradation in the quality of energy remaining  which also impacts our environment.- To accommodate growth we pave over an area equal to the state of Delaware every year.Common sense ought to inform one that this is unsustainable and can't go on indefinitely.

Despite that we beheld CBS'  Dokoupil asserting  the U.S. is already below the so-called "replacement level" by some measures, meaning fewer young people to support the country's otherwise aging population.  But as I've noted many times earlier, you do not generate more population to support an existing older population.  If you do, you end up with a population support Ponzi scheme.  But refusing to acknowledge this,  Dokoupil digs in deeper by bringing on a USC demographics specialist, Dowell Myers.    According to him:

"The trouble is we overshot and we dropped it down too much now,"

Myers said of the decline, "That's a crisis."   Actually, the crisis is that we have already overshot our resources in terms of population - as the preceding graphic shows- and are now consuming 1.6 Earths per year, which is madness.   This again gets back to that key quantitative indicator, the carrying capacity, first defined by Isaac Asimov:

That is a figure we are now on the verge of surpassing by a factor of four.  Obviously, this can be increased if the numerator can be increased or the denominator (each individual's ecological footprint) decreased. The problem is how to achieve it? (Especially if the total population continues to increase at 2-3% per year)    The point is we're rapidly approaching the threshold at which there will simply be too many people to feed given existing resources: water, arable soil, fertilizers etc.. The projections now are for at least 10 billion people by 2050, and an 80 percent probability of 12.3 billion on Earth by 2100. Simply put, there simply aren't the resources to support even the lower addition.

Despite the stark numbers which absolutely dispel any argument to increase human numbers, we are subjected to codswallop like the following from Prof. Myers:

"We need to have enough working-age people to carry the load of these seniors, who deserve their retirement, they deserve all their entitlements, and they're gonna live out another 30 years.  Nobody in the history of the globe has had so many older people to deal with."

Yes, but that doesn't mean you generate more people to support the existing people - old or other.  The rational response is not to generate more American babies but to expand immigration to allow more workers from other nations - who seek work and have essential skills  - to enter the country and provide the needed economic support-  on a guest worker visa or basis.

The Brookings Institution has predicted "a large, lasting baby bust" of at least 300,000 fewer children in 2021.   But again, what's the big deal? Where's the 'beef'?    As Laura Lindberg, who tracks reproductive data for the Guttmacher Institute, put it to Dokoupil  when he confronted her with this:  "SO?"

To Lindberg  the decrease in births was a sign of progress — a marker of women's equality and freedom of choice.   As she explained to a puzzled Dokoupil:

"So it's a shift to later in life. In that shift comes more education, more career, more employment. So it's a reordering of how people engage in adulthood."

Later in the featured segment, Dowell Myers didn't disagree — but in the bigger picture, he worried the declining birth rate is also a "barometer of despair."  In fact, it isn't despair but reality and logical response.  If a couple - Millennial or other - assesses its financial position and grasps it is too unstable and insecure to support a child then one doesn't make that choice- as difficult as it may be.    This isn't a barometer of despair but the judicious exercise of choice guided by reason.

Myers then confessed he never expected to be talking about a global declining birth rate during his lifetime.   But let's get facts straight:  the birth rate is basically only "declining" in the U.S. and other European nations. In Africa it is still exploding.  The flaw in the reasoning of those like Myers is in isolating the populations in prosperous western nations from the whole planetary population and the effect it is having in using up precious resources.  Asked   by Dekoupil what changed, Myers points to "the burdens of life", explaining:

"The cost of housing, the cost of education, all these things have become more and more difficult, I think the boomers themselves don't realize how much harder it is for millennials today. And they think, 'Oh yeah, when we were young we had to live, you know, on very little money, and we made do, and you can do the same.' That's the story, right? Well no, it really is a lot harder for younger Americans."

And the Boomers get that, at least many of us do.   What Myers doesn't get is that things have become harder for Millennials (born in 1981) because the population in the U.S. has been allowed to explode beyond the ability of the resources and capital to provide for each person.  Take the case of housing.  In the case of Denver the exploding growth in population has led to this situation described in The Denver Post:

"At the end of last month, only 1,120 single-family homes and 904 townhomes and condos were available for purchase across all of metro Denver and a few nearby counties,"

The effect has been soaring home prices, now a median of $524,000 and out of reach rents.  The same applies here in Colorado Springs where the pressure on homes has been created by those who can't find affordable homes in Denver. The salient takeaway  then is we don’t need any more people to increase demand on a diminished housing supply which raises costs.

Myers talks about one nation's "replacement rate" but what ought to really concern us is the whole global population's "overshoot rate"   Currently, that stands at a rate of 1.6 Earths consumed each year which is totally unsustainable. This leaves us with Isaac Asimov's stark warning = given at the end of a lecture he delivered at Queen's Park Theater in Barbados in February, 1976:

"Humans have a simple choice: they can either decrease their numbers on their own to live within the Earth’s carrying capacity or they can let nature do it for them”.

Lastly,  every baby born here in the U.S. creates a carbon footprint three times the size of that for a child born in the third world.  In other words, each American baby born disproportionately increases the Earth's overshoot pace.   If anything we need to reduce our numbers even below the replacement rate.