Can We Predict Geomagnetic Deviations In The Earth's Magnetic Field? 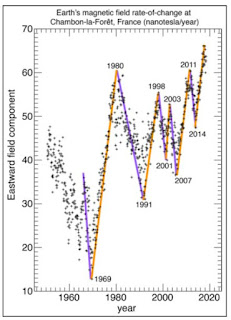 In previous posts I've discussed the phenomenon of the reversal of Earth's magnetic poles.  Less noted are more minor deviations, shifts or divergences.  These have been documented more often as long-lasting ground observatories have sprung up around the world.  Then geoscientists began noticing strange deviations in the B- field, including for example, that our magnetic North and South Poles roam freely around the planet.   The consequences of these minor deviations have been reported in the latest issue of EOS: Earth & Space Science (Vol. 102, No. 1, p. 50).

While it's true that the 2  poles sit off-kilter relative to Earth’s rotational axes -  because of the uneven and turbulent flow in the core -   they also drift gradually as the core’s dynamics swirl along field lines. Last century, for example,  the magnetic North Pole meandered through the Canadian Arctic, and since the 2000s, it’s been "sauntering across the Arctic Ocean."  (Ibid.)

Occasionally, this gradual movement accelerates, seemingly at random, and the drift of Earth’s magnetic field diverges in another direction. These diversions are called geomagnetic jerks  and are clearly evident in the graph above  showing the rate of change of Earth's magnetic field with time above.

Geoscientists also call the jerks “V-shaped” events based on their appearance in plots of the field’s rate of change over time. The events usually last between 1 and 3 years, and the first documented case was recorded in 1902. Dozens of jerks have happened since.

The last divergence event was in 2016, when it jostled the field and dramatically shifted the North Pole drift. The event was  inconvenient because geo-scientists had just issued a 5- year model of Earth’s magnetic field called the World Magnetic Model (WMM). The WMM team had to update the model ahead of schedule to avoid unacceptable navigational errors.

Though the origin of these deviations  is a subject of active research, a recent study in Nature Geoscience by Aubert and Chris Finlay at the Technical University of Denmark suggests that jerks may originate from the push and pull of forces in Earth’s interior (bit.ly/jerks-research). When a hot plume shoots up through the outer core, the delicate balance between planetary, rotational, and electromagnetic forces careens out of whack. The off-balance forces send a shudder along magnetic field lines in the form of waves.

The next jerk may already be underway.  A paper  by Huang and Duran (ibid.) predicts the next event will occur in 2021. If that’s the case, geoscientists may need to update magnetic maps on which industry and government activities rely. Companies drilling for oil and gas, for example, use fine-tuned magnetic models to dig boreholes. But not all jerks cause directional changes, so time will tell what the outcome will be.

It’s too soon to know whether a jerk is happening right now, however. Finlay, part of a group that publishes magnetic field models every 6 months, said it’s impossible to identify geomagnetic jerks until well after they’ve happened because researchers must look at the data over time.   He noted  (ibid.) "that it would take about 2 years to know for sure".

Regardless of whether the next event is upon us, geomagnetic deviations are one part of seeing the whole picture embodying Earth’s magnetic field. Indeed,  these jerks may illuminate the core’s thermal properties, a hotly debated topic that affects our ideas about everything from the age of the core to the onset of plate tectonics.

Solving the mystery of the divergences'  origin will remove a “stumbling block” of future magnetic field predictions, said Aubert, something we’ll sorely need to better understand our planet’s protective armor.  One scientist cited in the EOS piece, Vladimir Airapetian,  doesn't mince words when it comes to apocalyptic scenarios and our magnetic field.

He paints  one grim scenario in which a a catastrophically massive solar flare envelops Earth and knocks out the ozone layer, exposing us to damaging ultraviolet radiation known to cause cancer. In the 6–12 months it would take to rebuild our ozone layer, we’d live like “nocturnal animals”.   He adds (ibid.):

“You’d have to go underground and go out during the nighttime.  That’s the Hollywood-type scenario.”

Of course, I already noted the potential for such events in connection with CMEs or coronal mass ejections, e.g.

Although the prevailing science suggests that these doomsday scenarios are possible, they are highly unlikely. This is given the Earth’s magnetic field is fickle, cratered, and ever changing, but scientists have no reason to believe that the field won’t protect us for decades—and most likely centuries—to come.

Even one of the most dramatic of the scenarios, a magnetic reversal, is implausible in the foreseeable future. The last reversal occurred 780,000 years ago, and over the multibillion-year lifetime of the magnetic field, researchers guess that the poles have switched hundreds of times.

Further, geoscientists have no compelling evidence to suggest that a field reversal is upon us, said Catherine Constable, a scientist at Scripps Institution of Oceanography who studies magnetic reversals. The field changes so gradually that we’ll have fair warning, at least a few decades, Constable said.

Perhaps the more worrisome danger comes from space. The magnetic field is our main line of defense against the onslaughts of high-energy particles from the Sun. Recent research by Airapetian suggests that gigantic solar flares are possible in our solar system. Observations of other stars similar to the Sun reveal that our Sun may be capable of shooting out a flare of epic proportions.

Indeed, in the Hale prize presentation at the 236th meeting of the American Astronomical Society, solar physicist Kazunari Shibata showed the statistics and potential for solar superflares in a number of graphics, i.e. 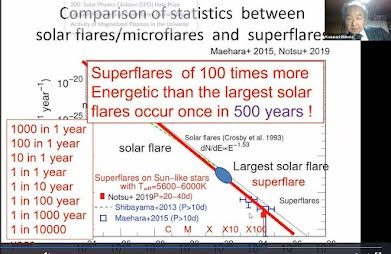 Thus, we could expect at least one of these monsters at least once every 500 years.

Congress passed PROSWIFT (Promoting Research and Observations of Space Weather to Improve the Forecasting of Tomorrow Act) in 2020 to pour money into space weather research, which the act’s authors called a matter of national security.   After seeing Prof. Shibata's presentation last June I am convinced that it is.