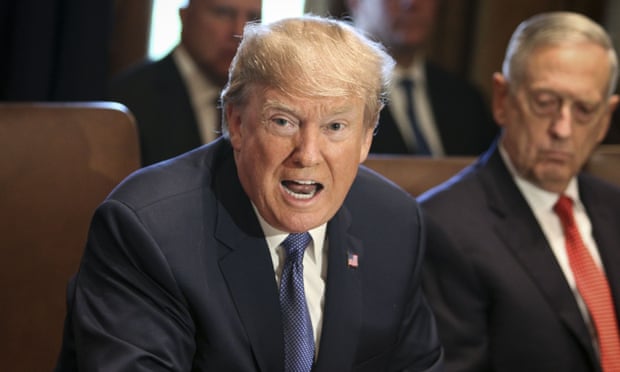 Dotard yesterday barking about a 1990 "lottery" immigrant program and idiotically blaming Dems  when it was launched under the Bush Sr. Administration.

I really have had it with Donald Dotard and his selective attention to what constitutes a terror attack and what doesn't. In retrospect,  since the Vegas massacre, it all seems based on political expedience and artificiality. In NYC two days ago we had a lunatic  (Sayfullo Saipov) use a rental truck to mow down people on a bike path, killing 8 and leaving 11 injured. Trump has gone absolutely ape shit nuts in response - about fifty times more intense than after the Las Vegas mass slaughter. That was also done by a lone perp - but that guy (Stephen Paddock) was white, elderly and with no Isis links  like Saipov seems to have.

So what is the result? The NYC truck incident is hyped as a "terror attack" despite leaving eight dead compared with the FIFTY EIGHT - and hundreds wounded - in Vegas.  There seems to be a double standard here, and a cowardly and  calculated reluctance to call the Vegas massacre what it was: domestic terror.

But because so many Reepos have their balls in a vice - reluctant to offend their true masters, the NRA -  they won't go there because it's "politicizing the incident"  Well, just ask all those hundreds wounded in Vegas, including many who will never work again and steeped in hospital bills,  how they feel about that codswallop.

Then we have Trump yesterday making a fricking federal case out of the NYC incident while he basically just shrugged and went through the motions after Vegas. There was Dotard in high dudgeon,  at a meeting with his loser cabinet,  raging against the diversity lottery program and blaming the Dems for it, yelping:

"The Diversity Lottery program sounds nice, but it's not nice.  We want a merit -based program."

(Schumer did vote for the program like many others when proposed in 1990, but he also tried to scrap it in 2013, but GOP votes blocked the effort.)

The 1990 program was actually created by the George H.W. Bush administration which - last I checked - was under the GOP banner.  It was created to increase immigration from countries under-represented via legal entries, largely from Europe and the Middle East. Applicants entered the lottery with up to 50,000 visas available,  and had to complete the same background checks as other immigration programs.

The point is Dotard got his head exploding over a program launched under his own GOP, which he presumably is part of - though one has to wonder at times as he attacks so many Senators in his alleged party.

But what was most galling is this asshole becoming so exercised in the wake of the NYC truck attack that he could froth at the mouth and blame Chuck Schumer partly for it, while turning a basic blind eye to the Vegas gun slaughter.  He bawled at his cabinet meet:

Big words for little Donny Dotard but you didn't hear anything like that in the wake of the Vegas mass shooting.   As CBS reporter Jeff Glor put it last night:  "Trump's words were in stark contrast to what he said in Las Vegas."  WHY?  The Vegas slaughter was every bit as much terror as what transpired in NYC. If you don't believe it look at the smart phone videos of the hundreds trying to escape while the rapid shots were fired from 32 floors up in the Mandalay Bay. The faces were those struck with TERROR!  That was domestic terror, but in Trump's words "we're not gonna talk about that today."

Contrast that with Dotard's  yelping about "stepping up our already extreme vetting program" and even imposing the death penalty after the NYC attack.

The conflicting reactions angered Muslim -American leaders as they were bound to. Why are you basically mum after hundreds were mowed down and 58 killed by an elder WHITE man, but you go ballistic vowing all kinds of stiffer penalties and sanctions after a Muslim carries out a far more limited attack leaving far fewer dead?  It makes no sense, unless bigotry is at the core of the disparate responses.

Even survivors of the Las Vegas mass shooting - lobbying Capitol Hill for stronger gun control measures - were taken aback by the sheer hypocrisy. As one put it, interviewed on CBS News last night:

"We believed something needed to be done and we just assumed the country was behind us. And a month later we've seen nothing happen."

Sorry, but you aren't likely to either, because the perp that wreaked so much havoc in Vegas wasn't brown-skinned or connected to Isis or al Qaeda,  That's the way it rolls in this hypocritical country whose "leader" goes absolutely nuts when 8 are killed from a truck in New York, but who shrugs when fifty eight are slaughtered via bump-stock driven automatic weapons in Vegas.

Oh yeah, about those bump stocks: A Senate bill currently banning bump stocks has 40 Democratic votes but none from the GOP. The take is "we're waiting until the Las Vegas investigation is completed".  As if  they're going to learn any more about the function of bump stocks after the investigation than we already know.  Or,  insinuating that one needs to be a genius or legal guru to understand the lethality when a bump stock is affixed to a normal semi-automatic.

At the University of Leiden two years ago, two researchers found more than 200 definitions of terrorism scattered around the world. Most shared attributes of violence, political objectives, and causing outright fear. One historian, Walter Lacquer, summed up the differences this way:

"In the real world there is not one terrorism, but a variety of terrorisms. Any attempt to find a common denominator - a formula - say as suited to 19th century Irish terrorism as to narco-terror in Columbia, or Islamic terror in Pakistan is bound to fail"

This is because there will always be divergent emphases, as well as parameter and intensity distinctions. Recall that in many quarters, the first reaction to the 9/11 attacks was to treat them as a major crime - not terror. It was only when the Bushies introduced the "war on terror" - which is a non sequitur - that terror became a ubiquitous dynamic. The problem is it holds too many in thrall who are prepared to cry 'Terror!' at the first suspicion.

BUT - if you are going to name one form (with Muslims or Isis agents the bad actors) as "terror',  you are then hoist on your own petard and will have to name all other mass death incidents terror-based as well. This includes naming domestic terror - whether ideologically-based, like Timothy McVeigh's Oklahoma City bombing OR Stephen Paddock's Las Vegas massacre  - for whatever reason.