After The Latest Gun Terror Are We NOW Ready To Act Like The Aussies- Or Like The Proverbial Ostrich? 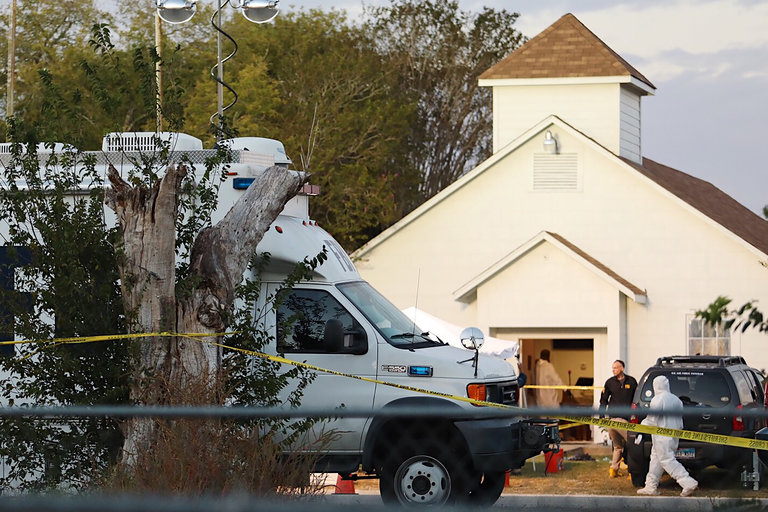 Sutherland First Baptist Church, in Sutherland Springs, TX where 26 were slaughtered by a psycho yesterday.

The church carnage wrought yesterday in Texas, with 26 lives wiped out by a lone gunman dressed in black ought to be defined as domestic terror - but I doubt it will be.  For reference, while Donnie Dotard was quick to call the NYC truck attack killer an "animal" he didn't use any similar parlance to describe Devin Patrick Kelley, the killer of more than 3 times as many people yesterday. WTF? Are white boy  mass killers  just "deranged" while Islamics are all "animals"? Double standard much.

Dotard compounded his idiocy by insisting (in Tokyo): this was a "mental health problem, not a gun problem" adding it was "too soon to go into gun control'". No,  you asshole, it's exactly the right time to go into gun control, as it was after the Las Vegas massacre by older white guy Steven Paddock. So the question becomes are we just going to sit on our asses until the next white, 'Murican terrorist snaps and slaughters innocents?

As I've written before, the mental health argument is just a copout, a red herring. Firmer gun control, namely registration - including psychological testing to qualify to own a firearm (similar to tests would be drivers have to go through to get a license),  would solve a lot of the problems. Government  buying up all the military assault rifles like the Aussies did after their Port Arthur, Tasmania massacre (see more below), would also go a long way to limiting supply of the deadliest weapons.

After all, the Second Amendment was never intended to be a national suicide pact.

Meanwhile, we have the likes of Texas Governor Greg Abbott proffering the usual empty platitudes like "Let us ask for God's help healing and prayers".  Last I was involved in any religion I seem to recall the saying:  "God helps those who help themselves".  We can help ourselves by limiting the supply of deadly weapons like Australia did after its worst massacre. That is, if we have the will and the balls to do so, as opposed to just shrugging shoulders and surrendering to the NRA.

Yet in dodging questions on TX gun regs this a.m. on CBS Early Show, Abbott preferred to go into the nebulous area of stopping all "evil" from truck killers, knife wielders and the like - without noting that gun slaughter has led to dozens of times more deaths.  The unholy truth is that most shootings are  NOT ideological, terror-based or random but rather domestic (in people's homes) - either suicides or one spouse (usually male) killing the other after a fiery argument.

Assaying all mass shootings between 2009 and 2015, The Huffington Post found that 70 percent occurred in the home. Of these, 57 percent involved a family member or current or former intimate partner. 81 percent of the victims were women and children. These killings were not done by 'crazies'  or Islamic terrorists but usually normal people who simply lost it in the midst of a heated argument and reached for the weapon nearest and dearest - a gun. (See, e.g. the book: 'Why We Snap', by R. Douglas Fields, showing how the right confluence of circumstances, triggers can send anyone into a rage and precipitous action. You don't have to be a psycho to be a mass murderer!)

Further, no sane or reasonable person can deny if there weren't so many military- style assault weapons available then even a mentally ill person (like Adam Lanza who committed the Sandy Hook massacre) wouldn't be able to get their mitts on them to commit MASS atrocities.

But sadly, the cojones of much of the nation are still locked down by the NRA especially those of our representatives who only choose to talk about "prayers"  for the deceased. But no thought to actually DO something to halt this bullshit.  Thus,  Sen. Chris Murphy's apt statement yesterday:

"No one is safe so long as congress chooses to do absolutely nothing in the face of this epidemic".

So true, and it IS an epidemic, every bit as virulent as an Avian flu epidemic would be and the level of slaughter - deaths (including suicides), attests to that.

And let me make this clear one time, I am - despite being an atheist - appalled that a particular species of slime ball would choose a house of worship to carry out his malevolent act. Though an atheist, I am not about to deprive anyone of  expressing their faith any way they want, or worship however they desire. They can do any of that, in any form they wish, because that is their choice. As Jefferson once put it: "It does me no injury for my neighbor to say there are twenty gods or no God. It neither picks my pocket nor breaks my leg" . So believe what you will, whether in talking snakes,  virgin birth resurrections or reincarnations. As long as you don't inveigh on my individual liberties you can do what you will.

In the current case, the gunman was identified as Devin Patrick Kelley, 26, according to two law enforcement officials who spoke on the condition of anonymity because the investigation was continuing. Kelley, who lived in New Braunfels, Tex., died shortly after the attack. He'd served in the Air Force at a base (Holloman)  in New Mexico but was court-martialed in 2012 on charges of assaulting his wife and child. He was sentenced to 12 months’ confinement and received a “bad conduct” discharge in 2014, according to Ann Stefanek, the chief of Air Force media operations.


Kelley started firing at the First Baptist Church in Sutherland Springs not long after the Sunday morning service began at 11 a.m., officials said. He was armed with a Ruger military-style rifle, and within minutes, many of those inside the small church were either dead or wounded. The victims ranged in age from 5 to 72, and among the dead were several children, a pregnant woman and the pastor’s 14-year-old daughter. It was the deadliest mass shooting in the state’s history. At least 20 more were wounded.

When Kelley emerged from the church, an armed neighbor exchanged gunfire with him, hitting Mr. Kelley, who fled in his vehicle. Neighbors apparently followed him, chasing him into the next county, Guadalupe County, where Mr. Kelley crashed his car. Mr. Kelley was found dead in his vehicle. Officials said it was unclear how Mr. Kelley had died. At the church, he left behind a scene of carnage. Of the 26 fatalities, 23 people were found dead inside the church, two were found outside, and one died later at a hospital.

Isn't it about damned time we call this what it is, unadorned, straight out domestic terror? Isn't it time to stop being coy and for a minority of super collector gun owners to be dictating rules for the rest of us?  The key to acting, to doing something proactive and positive to halt this nonsense, is to first accept that the security and needs of the many outweigh those of the few. That means  a minority of gun obsessives and collectors - especially of military assault rifles - can no longer be allowed to dictate gun laws via the NRA to the rest of us.

And IF this is accepted then we need to act like Australia did in the wake of its worst massacre in 1996. On April 28, 1996, a 28-year-old Australian,  Martin Bryant,  ate lunch at Broad Arrow Cafe in Port Arthur, Tasmania, a historic penal colony and popular tourist resort. After his meal, Bryant returned his tray, removed a semiautomatic rifle from his bag, and opened fire. By the time Bryant was caught a day later, 35 people were dead and 23 wounded in what became the worst mass shooting in Australian history.

What did the Aussies do that made their country safer? Among other things, the Australian government banned automatic and semiautomatic firearms, adopted new licensing requirements, established a national firearms registry, and instituted a 28-day waiting period for gun purchases. It also bought and destroyed more than 600,000 civilian-owned firearms, in a scheme that cost half a billion dollars and was funded by raising taxes. The entire overhaul took just months to implement.

Oh yes, there were the usual howls in the wake but the Aussie legislators showed they were not Milquetoasts and were not going to buckle. Predictably, the NRA  worked with gun-rights groups in the country to oppose any legislation that would make owning guns more difficult. Arguments against gun control ranged from the familiar “guns don’t kill people” to calling the legislation an insult to the vast majority of law-abiding gun owners. But proponents of gun control, who had long before the Port Arthur massacre called for restrictions on firearms ownership, pointed out that in Australia most people who committed gun violence had no criminal or psychiatric record. They added that it was pointless to compare the impact of an attacker with a semiautomatic gun with one brandishing a knife.

As Simon Chapman, an Australian academic who was co-convener of the Australian Coalition for Gun Control from 1992 to 1997, wrote last year about the group’s successful advocacy for a gun registry: “One day during a TV interview in 1995, we said as we always did ‘We register cars. We register boats.’ But this time he added ‘We even register dogs. So what’s the problem in registering guns?"

Indeed there ought to be NO freaking problem! If ANY entity or device has a life impact it ought to be worthy of registration. Do you lose freedom because of registering your car or dog ? Of course not!

The first step then to halt domestic terror is to regulate and register all those weapons with which it is most likely carried out - assault rifle.

Without invoking any paranoid ideations or beliefs, why would you not want gun registration like in Australia?

Why would you not want high powered military assault weapons out of circulation- using a method similar to the Aussies?

Don't give me any balderdash doing so "takes away my freedom". No it does not!  Your "freedom" doesn't depend on owning or firing military grade weapons (designed specifically for mass killing)  that the Founders could no more have conceived of than space ships!

Excerpt: "A database by Slate of gun regulations state-by-state gives Texas an "F" rating. Texas currently has no laws requiring background checks for private sales, no regulating of firearm registration and no ban on the purchase of assault weapons. The state does not have any restrictions on magazine capacity, nor does it have any restrictions on firearm ownership for the mentally ill. Texas also allows open carry with a permit and concealed carry on college campuses.

Texas’ relaxed gun control laws are the result of a majority-Republican legislature that shares views with the NRA on guns and gun regulation. Donations from the powerful gun lobby to these Republicans suggest that opposition to any type of gun control came with persistent nudges and bankrolling from the NRA itself."

Update:  As per the first link above, the Air Force failed to convey the gunman's record of violence and imprisonment to the FBI for entry in the national database. This again argues for a separate, local registration office (i.e. for each state or municipality)  to minimize the chance of such snafus such as occurred with Kelley. Also, a measure of redundancy is introduced.

Posted by Copernicus at 8:30 AM