No RAT (Like Mick Mulvaney) Should Be Put In Charge Of The Consumer Financial Protection Bureau. 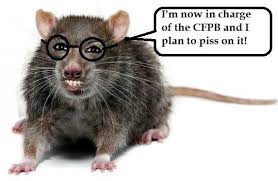 The Consumer Financial Protection Bureau was launched with great fanfare back in 2012 when President Obama finally had to act on behalf of consumers who'd too often been taken to the cleaners by assorted financial rats.  The biggest scam of all, of course, was the use of credit default swaps and their role in the 2008 financial meltdown.  These were basically financial bets - say on losses to be had by this or that bank, mortgage company, pension source - and were buried in dozens of financial instruments, especially collateralized mortgage obligations or CMOs.

Since most CDS contracts were made "on the fly" in no formal mode, and often by word of mouth on cell phones (ibid.) no one even knew where all the $55 trillion of this toxic waste was buried. As another hedge fund operator (Chris Wolf) quoted in the article put it:

When the stuff was located, as banks etc. had to come clean (finally) it nearly brought down the entire financial system via a vast credit seizure.  In the wake of this debacle, President Barack Obama knew he had to act and approved of the  Consumer Financial Protection Bureau - the original brainchild of Sen. Elizabeth Warren.

At the time Obama named Richard Cordray, a respected former attorney general of Ohio, to be the first director of the Consumer Financial Protection Bureau, after giving up hope for a confirmation vote in the Senate. The appointment meant the agency would be able to oversee a vast swath of lending companies and others accused at times of preying on consumers with shady practices.

In political terms, some media outlets portrayed Obama's move as "unapologetically brazen, the equivalent of a haymaker at Republicans in the Senate who had blocked his nominee". But in more sober and rational terms, Obama simply responded in kind to the fierce opposition and GOP obstructionism which had paralyzed many facets of his administration since he came to office.

The first move of the new  CFPB head, and one long overdue, was to demand simplified language for credit card and financial forms  (e.g. loans) . Hitherto, the language had been so dense and replete with mumbo-jumbo escape and conditional clauses that most Ph.D.s  in linguistics or English couldn't make sense out of it. In fact, had the Repukes  truly been for the little guys that they claim, they'd have applauded such simplification instead of trying to retain it.

But as we know Repukes are in the pockets of Business, whores to corporations and hyper-rich fatcats like the Koch brothers.   They view the "little guy"  basically as a collection of stupid pawns to be sacrificed when and where they see fit - to feed the extras to the rich.

That is exactly why the generic Repuke hates the CFPB.

Consumer groups hailed Obama's decision but as one might expect, the U.S. Chamber of Commerce balked and warned it was so legally shaky that the consumer bureau's work may be compromised. Of course, this is palpable horse manure. It isn't legally "shaky" at all, except in the minds of those who would screw consumers.

Flash forward now to the current impasse with Cordray having left but who promoted his assistant Leandra English  to interim director of the CFPB  on Friday. Trump, a.k.a. Dotard, countered by naming the Mick Mulvaney - already director of the Office of Management and Budget.  Recall Mulvaney is an incorrigible sleaze bag and rat who pushed for a despicable Donnie  Dotard budget back in March to cut programs such as "Meals on Wheels".

The program is often the only lifeline many  oldsters and disabled vets have to getting decent nutrition because they're no longer mobile or able to drive.  The Meals on Wheels personnel also provide regular social  contact for people who may otherwise see no one for days or even weeks. As one WaPo writer noted at the time, one year's benefit from 'Meals on Wheels' for a senior is equivalent to his spending one day in the hospital.

Mulvaney at the same time also insisted on scrapping the School Meals program, claimng  "there is no demonstrable evidence school meals programs actually work". In fact, there is ample evidence, including here in Colo. where many kids depend on those meals to get them through the day's classes, so they aren't distracted by hunger. Of, course, the POS Mulvaney probably never had to go through a day's hunger at his posh elementary school.

But this is the rat the Mega -Rat Dotard has now appointed as head of the CFPB.   The stage was set for conflict  yesterday, when Leandra English and Mulvaney duly sent rival emails to the CFPB’s 1,600 employees, the Washington Post reported. First, English wrote: “I hope that everyone had a great Thanksgiving. With Thanksgiving in mind, I wanted to take a moment to share my gratitude to all of you for your service.”  She signed off the message with the title “Acting Director.”

But it was Mulvaney, carrying a paper bag of doughnuts for staff, who entered the Director’s office at CFPB headquarters. He fired back: “It has come to my attention that Ms. English has reached out to many of you this morning via email in an attempt to exercise certain duties of the acting director. This is unfortunate but, in the atmosphere of the day, probably not unexpected. Please disregard any instructions you receive from Ms. English in her presumed capacity as acting director.”

The White House and congressional Republicans expressed confidence in Dotard's "authority" based on a 1998 federal law.   But recognizing the illegitimacy of the whole operation Leandra English filed suit on Sunday night in the US district court for the District of Columbia, asking for a declaratory judgment and a temporary restraining order.  If law has any more meaning in Trump's Amerikka  she  ought to get that restraining order. Even better, tossing Mulvaney into the ape or rat cage he really belongs.

Let us note here for the sake of clarity, that the CFPB was created as an act of moral authority and initiative  on behalf of millions of citizens besieged by all manner of finance (loan, banking, credit card) sharks. Up to now, the CFPB has spared citizens more than $12 b in fraudulent hits that would have been extracted from their hides had the agency not existed.  Does Mick Mulvaney car about any of this? Hell no! NO more than he cared in March about seniors not getting food from 'Meals on "Wheels' or hungry kids getting fed via the School Meals program.

Let's also be mindful of the fact that on Nov. 16 Mulvaney actually stated:

"I don't like the fact that CFPB exists, I will be perfectly honest with you."

Now, if he hates the fact the very existence of the agency he is supposed to lead, then it follows that he has NO moral authority to lead it. One cannot at the same time be against an agency's very existence and also head it. At least not in any moral capacity.   That would be like Adolf Hitler appointing Himmler in charge of the Theresienstadt  camp and Himmler saying:  "I don't like the fact that Jews exist, I will be perfectly honest with you."

Would you really expect Himmler to attend to the needs of the Jews in that camp? Or, would he more likely dispatch them to the nearest gas chambers at Auschwitz?  I defy anyone to convince me Mulvaney's motives are any different with respect to the life, activities and influence of the CFPB!

Mulvaney, therefore, is just a large rat "guarding" the vulnerable eggs in a henhouse. In this case, instead of eggs the latter is full of citizen safeguards in respect of finance. Also, appointed by the illegitimate Dotard (himself a treasonous Russian backed rat) Mulvaney has no legal authority either.  That is my take and you are free to disagree with it if you will - but there it is.  And I don't give one damn what any judge rules.

Barney Frank, the retired Massachusetts Democrat who was one of the authors of the law that created the CFPB, told CNN on Monday that Trump and Republicans were seeking to weaken the agency in an administrative fashion, rather than legislative, because it was popular for its work standing up to banks, mortgage companies, loan companies and debt collectors on behalf of ordinary Americans.
The CPFB, he said, was “fighting the big interests on the battlefield every day”.

"Wall Street hates it like the devil hates holy water,” Durbin said. “And they’re trying to put an end to it.”

And those of us who've studied the Malleus Malleficarum know that the "Devil" needs  demons to do his dirty work for him. That, of course, is where Mick Mulvaney comes in - keeping our analogies straight.

https://newrepublic.com/minutes/141394/meet-mick-mulvaney-trump-goon-wants-poor-kids-go-hungry
Posted by Copernicus at 8:57 AM