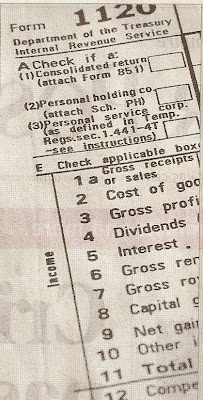 The biggest load of hype for the just announced GOP tax "reform" plan is the much ballyhooed corporate tax cut from 35 % to 20 %. But let's not fool ourselves, no one - certainly no CEO - really believes the typical corporation pays the full 35 percent rate. It's more like 10-15 %

But this is the codswallop attached to this misbegotten plan, along with the balderdash that it will "pay for itself with economic growth".  In a pig's eye.  No tax reform based on supply side baloney has ever done that.  The most recent stark example were the Bush tax cuts.

The layout of the first iteration of the Reepo "tax reform" or "the cut, cut, cut" plan in Dotard parlance - has now been spelled out in today's Wall Street Journal. Before I list the aspects of it I will quote finance specialist Jill Schlesinger, asked by Gayle King on CBS Early Show:  Who "wins" with this tax plan?  Ms. Schlesinger's  response: "The ultra-wealthy are the main winners".

Let's also back up and note that a "reconciliation" with an already passed  Senate budget is part of the deal. As I noted in a previous post (Oct. 24th), "The plan is also to cut $1 trillion from Medicaid and $473 billion from Medicare over ten years."   The latter alone, if integrated into the tax reform, would clearly mean either major cuts in benefits, and more likely some form of "premium support" or  voucher program.  In this case seniors on Medicare are given a set amount each year, as opposed to having most costs covered.

As I examined the CMS Summary sheets for the procedures carried out this past year I noted a total of more than $60,000 for the 3D staging biopsy and cryotherapy cancer treatment at UCHealth.  The ultrasound guidance part of the cryo treatment alone came in at $16,000 and the anesthesia just for that treatment, not including the 3D biopsy anesthesia, was $3,149..

If I had to operate under a $20,000 per annum GOP voucher plan, I'd have ended up shelling out nearly $40,000 out of pocket for the uncovered procedures. And none of that even includes the cost for wife's hip replacement surgery, including 7 days in rehab.. By contrast, the estimated "payoff" I\we can expect in tax cuts from the proposed GOP tax reform is about  $450.  Do the math and compare that chump change with the $40,000 cited earlier and you will see why I'd rather pay the taxes - any day, twice on Sunday - just like our European friends are happy to do. Given they know which side their economic bread is buttered on, and it ain't the tax cuts side!

- For new home purchases, the mortgage interest is deductible only on loans up to $500,000, no more. If enacted it will apply retroactively to mortgages on home purchases starting Friday. (Existing homes would be grandfathered under the $1 m limit).

- - Deductions for state and local income and sales taxes are wiped off the board.  Tough luck if you happen to live in CA, NY, NJ, MD, MA and IL)

- The deduction for property taxes will now be capped at $10,000.  Tough luck if you live in a high property tax state.

- The deduction for medical expenses will now be repealed. Medical expense write offs are currently allowed if they exceed 10 percent of annual income. So, if your income was $60,000/ yr. and medical expenses came to $7,000, you could deduct that. No longer.

- The standard deductions are increased to $12,000 for single filer and $24,000 for couples. Already 70 percent of filers (according to Jill Schlesinger) go this simpler route and that's now expected to increase to 84 percent.

- At the same time, the "personal exemption" each individual normally gets is now eliminated.

- The "child tax credit" for children under 17 now goes from $1,000 each to $1, 600 and clearly only benefits one subset of married couples - which even the WSJ editors had a problem with, noting it's a: "forlorn attempt to appease the income redistributionists on the Right"  adding, "Does anyone think a mid-level manager at JP Morgan really need a subsidy to raise children?"

Indeed, and as I've posted on before, we ought to actually be going the route of repealing the child tax credit given a global warming planet where each  additional person (especially in developed nations) leaves an ever larger carbon footprint, adding to the 41 gT a year of carbon expelled into the atmosphere.

-  The tax plan calls for $65 b less in tax benefits for post-secondary borrowers over the next decade. That includes repealing a provision that allows taxpayers to deduct up to $4,000 a year in tuition and related expenses if they earn less than $65,000/ yr.

- The estate tax benefit per person is now doubled from $5 million to $10 million - along with inflation adjustments, giving a massive boost to the ultra-wealthy.

So there you have it in a nutshell. The layout of the current GOP tax plan before any budget reconciliation occurs, which might also mean deep cuts to safety nets like Medicaid and Medicare.

As I wrote earlier, I will happily do without any tax cut - and wifey will as well - if it means our Medicare is left alone.

I am sure others will also have their own opinions, depending on which tax  'ox' is gored in the above proposals.