Another Courageous Judge Throws A Haymaker At The Trump Cabal 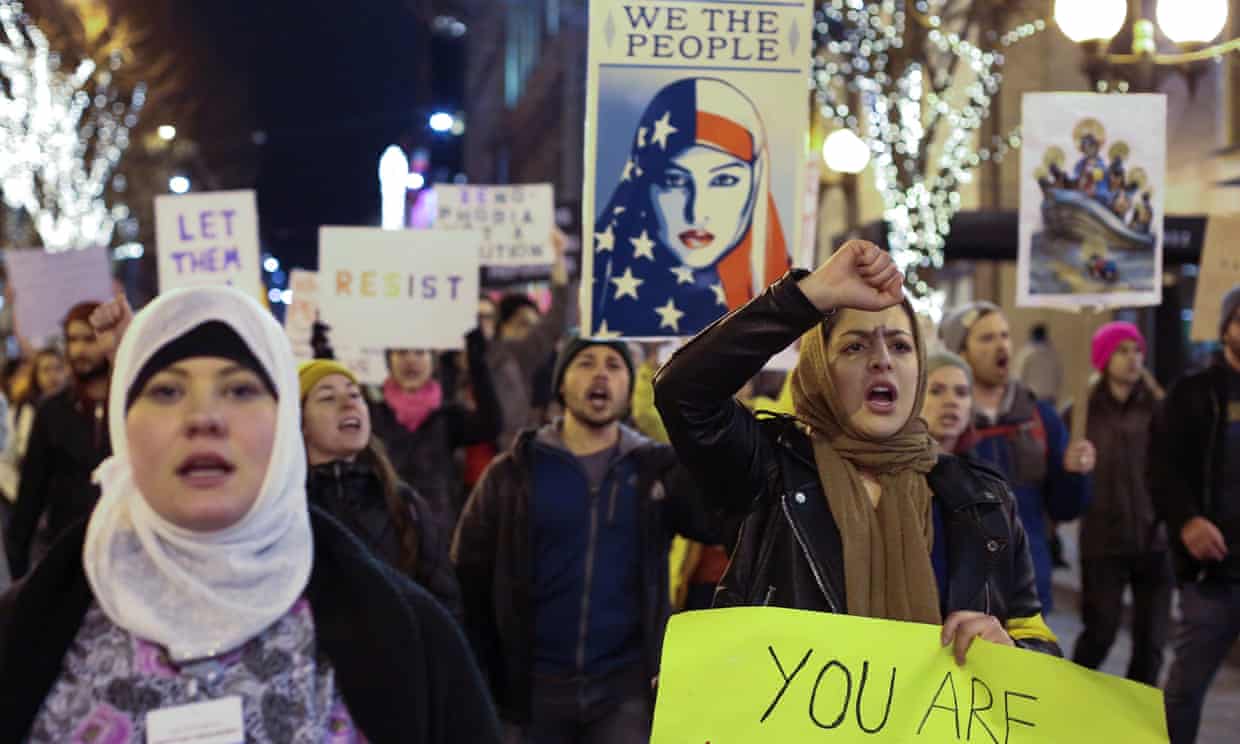 Marchers on the streets of Seattle Friday night, demanding the Trump dictatorship obey the law.

"I think this cloud is one that is going to rain a storm upon this administration and it deserves it".   - Harvard Law Professor Lawrence Tribe on MSNBC last night

Following in the footsteps of deputy AG Sally Yates days ago, a federal judge(James Robart)  in Seattle   ordered a temporary halt on Donald Trump’s travel ban for refugees and people from seven predominantly-Muslim nations. Indeed, Customs and Border Protection (CBP) reportedly told U.S. airlines that they could board travelers who had been barred.  The result was a haymaker of a ruling, effective nationwide, that upheld the Constitution and had the Trump Imperium on their heels, scrambling for response as they went into histrionic mode.

As I pointed out before, this was a no brainer given that the "order" violated the Constitution in numerous aspects including the equal protection clause and also the establishment of religion prohibition.  There was also the fact this glorified tweet was never properly processed and vetted in the first place, one reason it caused so much consternation including among 1,000 career professionals at the State Department. They put their names to a Dissent Letter which allows them to make their criticisms known without fear of retribution from poltroons and narcissistic assholes.

As Washington attorney general Bob Ferguson put it: "We are a nation of laws. Not even the president can violate the constitution. No one is above the law, not even the President"

Indeed, and he will learn - like Richard Nixon did before him - that he is not a goddamned potentate or king, and if his own congress or Justice Dept. will not hold him to account, then governors of the states will. At least those governors who recognize constitutional transgressions when they see them.

"This decision shuts down the executive order immediately, shuts it down. That relief is immediate, happens right now. That’s the bottom line.”

Meanwhile, Trump's head was exploding as his panties became twisted with yet another uppity guy who refused to kiss his ass and follow his orders, like Aussie PM Malcolm Turnbull and Mexico's President, and now the Iranians too.

In his order, Robart wrote that the states had shown “immediate and irreparable injury” caused by Trump’s order.  He wrote further:

“The executive order adversely affects the states’ residents in areas of employments, education, business, family relations, and freedom to travel,” he wrote. He then issued nationwide restraining stops to several sections of Trump’s executive order: its 90-day ban on visa-holders from seven nations, its indefinite ban on Syrian refugee admissions, and its 120-day ban on the entire refugee program.

“The work of the court is not to create policy or judge the wisdom of any particular policy promoted by the other two branches,”


Robart also wrote. “The work of the judiciary, and this court, is limited to ensuring that the actions taken by the other two branches comport with our country’s laws, and more importantly, our constitution.”

The judge insisted that his ruling was “narrow” – about whether certain actions by the president were cause for a restraining order – but concluded that “the circumstances brought before [the court] today are such that it must intervene to fulfill its constitutional role in our tri-part government.”

Late last night, the White House Cabal released a statement saying that it would seek an emergency stay. This was after an earlier request for a stay by a justice department attorney had been denied by Judge Robart. Evidently it's hard for Trumpies to grasp when THEY are breaking the law. Also, it's extra sad that with Sally Yates' departure the DOJ under her replacement Dana Boente appears to be filled with just 'yes'' men and poppets  - prepared to do the potentate's illegal bidding.  They seem to have left their principles at the door.

“At the earliest possible time, the Department of Justice intends to file an emergency stay of this outrageous order and defend the executive order of the President, which we believe is lawful and appropriate. The president’s order is intended to protect the homeland and he has the constitutional authority and responsibility to protect the American people,”

Of course, this is all recycled horse shit and as I noted in previous posts it does nothing to protect the homeland. All it does is to give ISIS plenty of propaganda material for its online recruitment. That along with the Trump earlier blurt that we "need to take the Iraqis oil."  How dangerous is this stuff? Ask anyone serving in Iraq who now must  look behind their back every second thanks to this deranged fucker's impulsive words.

Almost as degenerate, as Harvard Law professor Lawrence Tribe noted last night, was the secret order issued with the phony executive order that all lawful visas be rescinded. In Prof. Tribe's words:

"So called laws made in invisible ink, in the dark, in ways that violate our constitution, hurt everybody."

Referencing states' retort to the idiots in the DOJ, to the effect that they "lack standing". No they do not because their universities and businesses are adversely affected by this fucking ban.

Another takeaway for these Trumpist jackasses and the fools who defend them: The American Enterprise Institute has calculated that the odds of an American being killed by a Muslim refugee are 3.6 billion to 1. That is greater odds against than three Apollo asteroids crashing into the Earth at once.

And finally, 48 college presidents - including from Harvard, Brown, and Washington University (where one of the debates was held) have signed a letter to Trump pointing out the dangers of his foolish "executive order" and how it was unconstitutional and risked Americans' safety.

Michael Smerconish this morning wisely advised it was time for Trump to "fold his tent" and not squander any more "political capital".  (As if he ever had any). Smerconish observed the alternative is that the litigation arising will likely last longer than the ban itself. Indeed, it may last years.  As Trump and his cabal fight on with many different courts and rulings, it is assured that many of his other plans will be flayed as he loses whatever scintilla of capital he has left.  But he has no choice, given "President Bannon"  has issued his direct orders to the Donald.

It was not immediately clear whether authorities would comply with the broad order, especially after officials reacted in confusion a week earlier, detaining valid visa holders and arguing with lawyers. But the justice department at least had the sense to say it would not immediately file for an emergency stay, at least on Friday night. Reports said Customs and Border Protection (CBP) had informed US airlines that they should board travelers who had been barred by an executive order last week.

For those who may be unaware, we are already in the midst of a constitutional crisis, certainly in the embryonic phase.

See also the view from Barbados: