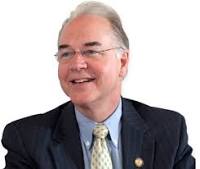 New HHS head Tom Price, another architect for the destruction of the ACA.

Another sadistic aspect of the Republican proposal scraps the income-based Obamacare subsidies that help families buy affordable insurance. Instead, Ryan wants to offer a flat subsidy that would be the same whether families earn $500,000 or $50,000. Residents of Minnesota, for example,  would get the same support as residents of Alaska, where premiums on average are three times as high. The subsidies would vary by age to give older people more support, but the Republicans have not said how much more.

Anyone see any similarities to Ryan's "premium support" or voucher plan for Medicare? If so, good for you! You recognize limited "block" allocations for medical funding, similar to the Ryan Medicare vouchers, which may not even cover one fourth of medical costs for even a relatively healthy senior or working class citizen.

And note that last week, the Department of Health and Human Services under Price proposed regulatory changes to the law, one of which allows insurers to reduce benefits and force people to pay higher deductibles on future policies. And to the point concerning the cessation of the individual mandate I noted earlier,  the Internal Revenue Service will no longer require people to answer a question on their tax returns about whether they had insurance the previous year. The question remains on the form, but filers can chose not to answer it.

Under Obamacare, people must buy insurance or pay a penalty enforced by the I.R.S. By backing off, the I.R.S. will encourage people to forgo insurance and take a chance that it will not seek more information or penalize them. When fewer people, especially the young and healthy, buy insurance, overall costs go up, because the people who do sign up tend to need more medical care.

The GOP in its plans has processed this, and therefore opted to do a "replace" using a plan with a double -edged sword. One edge allows pre-existing conditions to be covered but only if the person has been on such a plan for no less than 18 months of continuous coverage. The other edge places the sickest (as well as those with serious pre-existing conditions) in high risk pools. This means they can be charged up to double the cost of those with no serious ailments.

As a matter of record, in the recent past it was found that in more than 30 states that had such high risk pools net losses added up to more than $1.2 billion. That was in 2011, the height of such pools before the ACA took effect. Most of these pools also had lifetime and annual limits on coverage. So, if you got breast or prostate cancer, for example, your coverage might be capped at $25,000 a year whereas you needed at least $50,000 for full tests (e,g. followup biopsies) treatments.  In addition, waiting periods were imposed of up to a year to get even this limited plan.

This is where we are headed with the GOP's "repeal and replace" and why so much rage has been stirred at town hall meetings, which assorted numskulls have blamed on  astroturf" activisim with protestors being "paid". (The recent FAUX News claim is "$1500 a week", prompting Esquire contributor Charlie Pierce to joke, 'Hey, sign me up! I'm available!")

Will Trump voters be as outraged as Dems currently on the ACA, but who stand to be displaced? They should be! And now is the time to strike when their Reepo vipers... errrr reps.... are still on recess so they can be ambushed at town halls and asked what's up. All citizens who stand to be victimized by their chicanery  can reach their representatives and senators and give it to them. Alas, too many lawmakers have cowardly canceled town halls to avoid angry constituents. Never mind, pissed off voters - just by showing up to sn empty hall-  can still send a strong message that Americans want legislation that improves health care and makes it more affordable for everyone, not the opposite. Just stand outside the empty hall with your placards aimed at the vermin cowards, and scream  - and let the optics deteriorate as local TV cameras roll.

No more time for nicey nice, folks, it's time for political combat - given lives and futures are now on the line.  I'm also glad to see that even the usually Spock-like, 'no drama' scientific community is finally getting riled up for more emotional protests, displays - given what Mr. Dump has in store for them, with cuts.

Posted by Copernicus at 8:16 AM