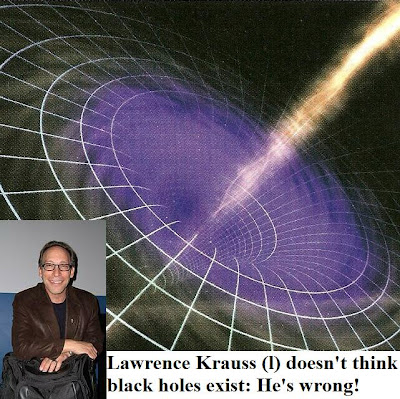 Brought to my attention recently by a good friend is an article about Lawrence Krauss evidently rejecting the concept of black holes, e.g.

The article notes of the phenomenon of "Hawking radiation", whereby quantum-scale black holes can indeed "evaporate", "so that anything that enters is eventually released over billions or even trillions of years". The question is then raised: "How can something be both airtight and leaky"? But no one ever claimed quantum holes were both, only stellar black holes - the collapsed cores of massive stars, qualified on both those counts.

where G is the Newtonian gravitational constant, c is the speed of light in vacuo, and M is the gravitating mass. Once a stellar remnant collapses within this radius, light cannot escape and the object is no longer visible, hence effectively "air tight" to use the words of the article. It is a characteristic radius associated with every mass of macroscopic scale. (As I noted, Hawking radiation preents quantum black holes from qualifying for the effective shutting off of radiant energy, because of their quantum properties which allow for quantum tunneling, superposition of states-interference effects etc. not to mentionbeing subject to the energy -time uncertainty principle).

Now, according to the article:

"Physicist Lawrence Krauss and Case Western Reserve colleagues think they have found the answer to the paradox. In a paper accepted for publication in Physical Review D, they have constructed a lengthy mathematical formula that shows, in effect, black holes can't form at all. The key involves the relativistic effect of time, .....n effect, Krauss says, time effectively stops at that point, meaning time is infinite for black holes. If black holes radiate away their mass over time, as Hawking showed, then they should evaporate before they even form, Krauss says. It would be like pouring water into a glass that has no bottom. In essence, physicists have been arguing over a trick question for 40 years"

But not really! The fact is that Krauss' formula doesn't apply to macro-scale black holes, of the type that form from collapsed stellar cores, but only to quantal scale ones that have the potential to emit Hawking radiation. Thus, Krauss' error lies in extrapolating his results from the quantum-scale black holes to the macro-scale ones (of which some new findings report holes of several million solar masses at the center of our galaxy.

Krauss, in the article argues:

"'How do you know they're black holes? No one has actually seen a black hole', he says, and anything with a tremendous amount of gravity--such as the supermassive remnants of stars--could exert effects similar to those researchers have blamed on black holes. "

But this is being too clever by half. The fact is that given the preceding theoretical threshold for the Schwarzschild radius we have an excellent default scale point for macro-emergence, and we are also able to empirically validate the limiting parameters once the hole is associated with a known stellar binary system. Thus, in the case of macro-scale black holes, we observe them indirectly as a members of binary (double) star systems, in order to infer their presence from x-rays given off when the companion star’s gaseous layers are sucked into it.As the extraneous matter is severely compressed by the black hole's gravity, it gives off the characteristic x-rays. We can say this with very high probability, irrespective of Krauss' formula.

In the case of supermassive galactic black holes, such as the pair recently discovered within clusters of ellptical galaxies more than 300 million light years distant, we have one "record breaker" at 9.7 BILLION time the mass of the Sun. For such a monster, the Schwarzschild radius would work out to 2.89 x 10^13 m, or about 193 astronomical units (AU). This is about 4.5 times the diameter of the solar system. The astronomers who effectively detected it used the Hubble Space Telescope and supercomputers to crunch the velocities observed for the stars in the vicinity of the objects, which would have been moving considerably faster than otherwise expected. (Recall the vis viva equation in obtaining the velocity of a body within a mutually orbiting system).

Can Krauss refute their findings, which were published Monday in the journal Nature? Then let him go for it!

Further, as astrophysicist Kimberly Weaver of NASA's Goddard Space Flight Center in Greenbelt, Maryland notes in the article, we haven't actually seen or detected Hawking radiation - the putative signature for Krauss' equations - either. So what's with that?

To make a long story short: the bottom line here is that the Schwarzschild radius provides an excellent theoretical threshold for setting the limit for emergence of actual macro-scale super-massive black holes. Unless Krauss can disprove it or attack its physical assumptions or basis, most of us will stick to the paradigm that black holes can and do exist, until such time
Posted by Copernicus at 10:50 AM

Amazing insight by Krauss, and it seems so simple. From our perspective, particles can never penetrate the horizon. That nasty singularity problem is solved. Except, perhaps for horizon overload. That is, the mass density at the surface increases twice as fast as the mass density of the volume. Therefore the surface may be subject to collapse under its own weight at some critical mass. In which case matter could break through the horizon barrier and collapse to the singularity, initiating another big bang, or big bounce as they now seem to be calling it. I think the proper name for a black hole should be something like a black trap.