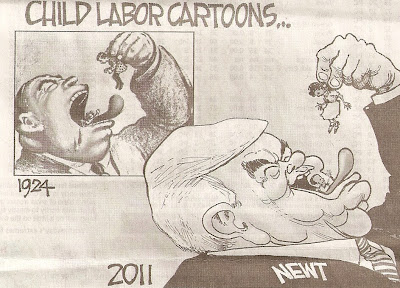 A recent sign of the desperation of repukes is how Newt Gingrich's stock has suddenly risen with the demise of Rick Perry (the guy who couldn't recall the fed agency he wanted to eliminate in one debate) and Herman Cain (the guy who called Wolf Blitzer, Blitz Wolfie in one debate, and who in a Milwaukee Journal-Sentinel interview couldn't recall a single thing about Libya. Oh yeah, and a guy who's had multi-affairs over the years.) There's an old saying about "digging into the bottom of the barrel", but I won't go there...for now...

But let's contemplate this: Newt Gingrich, the former Speaker of the House, ca. 1994, who once went toe to toe with Bill Clinton to try to shut down the government (Clinton never blinked, Newtie did) and who almost single handedly drafted the infamous "Contract on America" (he called it "Contract with America" - but we know better!) which offered the template for converting us into a Third World Oligarchy, now has aspirations to become our top leader. Excuse me!

Oh yeah, and let's not forget how he just ditched his wife who had cancer to run off with someone else younger. Some family values there! How the fuck can anyone in their right mind even think of putting this clown on a ballot? (Oh, and btw, who can forget his trips to Tiffanys to purchase blood diamond jewelry and other ostentatious luxuries.)

How is it seriously possible, given the "99%" are the majority in this country - and hence also by extension the majority of voters - that a clown like Newt Gingrich would have even half a snowball's chance in hell of being elected Prez?

Only if most of them sit out next year's election or secretly sustain a 'woody' for the Repukesters! (In which case it may not be the "99%" who OWS ought to be supporting, but mayhap the 90% or even 80%!)

And what pray tell is Newt's great conception for this election cycle? We saw Obama's touchstone legislation was his Health and Affordable Care Act, while Bill Clinton's was his Executive Order to mandate the release nearly all previously hidden secret files (held by agencies since the 1960s) under the Freedom of Information Act. A subset of such releases pointed many of us in the direction of CIA operator George Joannides as a key player in setting up Lee Oswald to be a patsy in the JFK assassination. (Which makes one wonder why those WC parrots like Stephen King, Vince Bugliosi et al didn't avail themselves of more FOIA files!)

Well, Gingrich's hot idea is to basically take the money now supporting the volunteer teaching service known as Americorps, as well as Peace Corps and use it to set up a "Child Labor Corps".

The gist of the idea, as reported by columist Kathleen Parker ('Let Them Clean Toilets', Denver Post, Dec. 8, p. 5B) is to let kids from schools in poor neighborhoods (obviously, mostly black kids) work janitorial jobs after school, including scrubbing floors and toilets. Acccording to Parker:

"His argument is that poor kids who live in housing projects don't see people working and therefore, 'literally have no habit of showing up on Monday'. Instead they, you know, gravitate to pimping and prostitution. "

So, Gingrich's claim is if we put these poor kids to work then all sorts of successes are possible, including: they earn some dough on their own and so won't end up 'welfare queens' (not that this is probable since the 'welfare to work' legislation of 1996) and also that they will get used to the sort of jobs they will be more or less expected to do in Newt's repuke-nation oligarchy future, even if they graduate from a 4-year college.

Well, Newt might be correct in that regard, since if the Repukes' austerity budgets are passed, the whole floor of the jobs pyramid will collapse, I believe 'pancake' is the term, to the lowest or ground level of subsistence work.

And in that case, and certainly if an elitist a-hole like Gingrich gets elected by a majority of dummies, it will definitely be the case that only the 1% will have any kind of decent jobs. The rest of us will end up as shoe shiners for them, or cleaning their toilets, if we're not delivering their rose wine wraps or foie-de gras on special gold-engraved trays.

Lastly, it isn't surprising that another clown ("the Donald") would endorse this fool and his crackpot ideas. Ultimately, these two blowhards for capitalist excess will turn out to be the ones who eventually ensure its destruction.
Posted by Copernicus at 9:22 AM