Be Careful What You Wish for....Fellow Citizens! 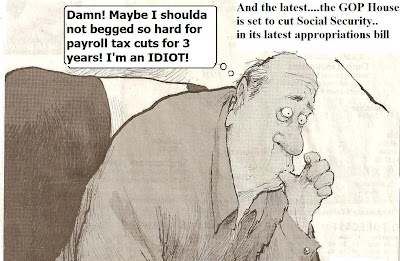 In an interesting and intriguing interlude on ABC Evening News two weeks ago, a parade of citizens in Youtube offerings was seen all saying the same thing: "Please, congress! Stop playing games and pass the payroll tax cut! We need that money!" This was during the time a couple weeks ago when Repugs had done their typical end of year grandstanding and threatening to take down a deal to pass these cuts along with a 59-week unemployment benefits extension and a prevention of the proposed 27% cut to Medicare physicians.

In retrospect, one wonders if these people really appreciated and grasped what exactly they were asking for, and that in the end.....they have been pleading for a small increase in their yearly income which over the long term guts their retirement prospects.

This was brought into focus today with a report out of The Washington Post noting that for the first time in history, politicos are using Social Security's funding as a poker chip in their high stakes games. The danger? A mechanism which has assured Social Security's integrity since its inception, is now being gutted which may well pave the way for either the program's collapse or its conversion to a welfare program. This at a time when nearly 1.7 million a year are desperately trying to get Social Security disability after months or years of unemployment, and nearly 40 million seniors over 65 depend on their Social Security benefits for most of their income.

The prospect of lawmakers and politicos continuing to use the payroll taxes and specifically cuts to provide economic stimulus during a quasi-recession has disturbed many experts, especially Social Security's two public trustees. They both worry that if this tactic becomes entrenched Social Security will lose its status as a protected benefit due every American based on what they paid in - via payroll taxes- and instead becomes another welfare program, or a program subject to appropriations approvals.

In the first case, we might see either it being cut outright, or possibly converted into a "work to welfare" format such as transpired with the 1996 Welfare Reform Act. Picture then 88-year old tottering grannies barely managing to stand up as Walmart greeters in return for the $800/month checks. In the second case, we'd see the Congressional Budget Office declare social Security no longer sustainable so that yearly budget appropriations must pass through the House. If its GOP-controlled most able-brained folks can predict how that will work out.

One of the trustees, Charles Blahous, quoted in the article, said:

"It's a grave step for Social Security. It just seems to me the program both financially and politically will be on a lot rocker footing".


Not only that, but if the payment support is variable then logically it means the whole program is variable and can become welfare, or subject to appropriations bills. Well, I had warned about this in previous blogs, e.g.

Meanwhile, Robert Reischauer, the other trustee, acknowledged that extending this cut during a period of high unemployment could be justified, but "if it continues for a substantial period of time it could undermine one of the foundational arguments that makes the Social Security program inviolate"

Well, that undermining is already underway, as noted in the last of the two blog links above. You can bet your sweet bippy it will swing into high gear if the GOP takes over both legislative houses as well as the Presidency. And as other skeptics have noted, the problem is when one plays this game one can become hostage to it, or maybe addicted is a better word. We've already seen how the Zombie Bush tax cuts - which ought to have been finally expired last year- rose to life again and we're barely two votes away from them becoming permanent zombies - forcing vast cuts to all benefits later.

"All of a sudden Social Security will have to compete with every oter program, whereas before it had its own dedicated revenue. It's breaking the kind of firewall that has always existed between the trust fund and the operating fund. The biggest concern is that this was done without any hearings, without any apparent regard for the impact on Social Security."

Which, of course, introduces the question of WHY, especially under a Democratic regime. This year, Social Security is projected to pay out $46 billion more in benefits than it takes in- meanwhile, Social Security disability is projected to be broke by 2017. It is claimed (in the article) that the first shortfall is being made up for by "redeeeming Treasury bonds bought in years when there were cash surpluses". But that isn't the critical factor here. The critical factor is what will the yields of those Treasurys be? One thing we do know, this sort of strategy is unsustainable when the Federal Reserve is already on a bond-buying spree driving down the yields of even 30-year Treasurys to barely above 3.09% (according to a WSJ piece from 4 days ago).

Meanwhile, the chief actuary of the Social Security Trust fund has claimed that the payroll tax cut "will not put a dent in the $2..6 trillion fund". But how long do you supposed that argument will hold up when politicos are still playing both ends against the middle and using Trust Fund monies to pay for things general revenue ought to cover, like the pullout from Iraq (estimated cost $300b) and the Afghanistan supplemental budgets.

The saddest fact in all this is that, bereft of arguments to defend higher taxes in the face of the Repuke tax cutters, Demos caved and "borrowed from the Republican playbook" arguing now that reverting to the old (payroll tax) rate of 6.2% would be a tax hike. Well, they may have outsmarted themselves! Now, their words will commit them to doing this ad infinitum, even as they likely sustain the Bush tax cuts to be consistent. This, despite the fact that actual computations disclose that payroll tax cuts do next to nada for the economy, just as the Bush tax cuts do next to nothing. Again, see The Financial Times' report on those ten years of Bush tax cuts (FT, Sept. 15, 2010).

A much more powerful economic stimulus would be delivered by extending unemployment benefits indefinitely, or at least another 99 weeks. The unemployed will spend that money immediately on food, rent, mortgage, school supplies....whatever. That is what will keep jobs from being sliced.

In the meantime, Sen. Bernie Sanders has rightly warned that Americans should be more cognizant of what they are yearning for here. Is it really worth it to put maybe $900 extra in your pocket then later in your elder years, when you REALLY need money - to have to live on peanuts after Social Security cuts. Or, be forced to work as street sweeper on a "Social welfare to work" program?

"Whether you're on the left or the right you should really dislike this. It has been somewhat mystifying, the determination to do this. I just think it's short sightedness."

Actually, not mystifying at all. Merely reinforcing once more how crass, calculated and cynical political gamesmanship can fool enough of the people enough of the time -when times are somewhat tough - to make them grab for an instant sop while forgetting their long term welfare. No one can say they weren't forewarned when the shit finally hits the fan.
Posted by Copernicus at 10:20 AM