Why Americans Hate the Media - Duh! 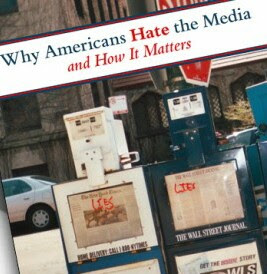 Jonathan M. Ladd's new book, 'Why Americans Hate the Media and How It Matters' seeks to examine how the citizens of this nation have become so alienated from their mainstream information sources over the past 40 years, leading to an ultimate balkanization of interests and reinforcement of partisan lines and polarization. In a recent salon.com interview Ladd sought to partially explain this:


"Most small cities in the United States, by the mid-20thcentury, only had one dominant paper. But the (overall) readership stayed about the same, or grew — so more people were reading fewer sources. There was just less competition, so they could produce the style of news they thought was the best. You had the perfect storm for the press to become really trusted."

But this tells only half the story, if that. Because it wasn't simply a matter of small scale but also the fact that journalists were paid to actually go out and DO journalism! There were actual news offices, such as at The Washington Post, that dispatched its reporters (such as Woodward and Bernstein) to follow real stories and pursue the unvarnished truth as opposed to PR. All that went through the eddoes once the massive corporate buyouts and mergers of the 1980s began. Thus, a hot pursuing team of reporters that could break something like Watergate, became a rarity. The money wasn't there, and futhermore the big honchos at the top - who sold ad space, didn't want it. They didn't want to offend any of their ad purchasers!

We now know that one of the most pervasive means for the Corporatocracy to gain power easily is by controlling the vast media machine of the country: from networks, to news organizations, to magazines and hundreds of daily newspapers.

In terms of this machine (or “the Mighty Wurlitzer”), it is useful to know that eleven media corporations have no less than 36 direct links to each other "creating a solid network of overlapping interests and affiliations". Further, these 11 media conglomerates "have directorships interlocking with 144 of the Fortune 1000 companies", according to Carl Jensen of Project Censored.

This has led media critic Robert McChesney to aver :

"Given this networking system it is safe to say that the media in the United States effectively represents the interests of corporate America and that the media elite are the watchdogs of what constitutes acceptable ideological messages, the parameters of news and information content, the general use of media resources. "

Further, and in line with the mission described above, key information can be suppressed and other information/news altered. This may then be used to enforce designated perceptions - and there is the enormous potential to instill false consciousness on a vast scale. To bend and mold millions of malleable minds into deformed ways of thinking – by using disinformation, a tried and true ‘psy-ops’ tactic.

Leaving the victims to actually believe they’re independent thinkers or their 'own voice' is projected rather than echoing clarion calls of the op -ed pages of The Wall Street Journal, or some FOX network pundit who resonates the same chord with (x + 100) other pundits.

Unless one is aware of the nature of such control - that it exists and how it works, he or she is in danger of being brainwashed. This is independent of how much education the person has, or how 'canny' or media-savvy they believe themselves to be. No one, unless they are enormously well read, preferably with experience to match, can totally escape the maw of the Corporatocracy's brain and 'green' washing machines.

As Carl Jensen, Editor of the Project Censored Yearbook notes:

"The next step in the information control process in America is to use this control to effectively exploit our minds. This, also, it seems, has been accomplished. The mind manipulators are well aware of the first principle of successful mind control - repetition"

Thus, the point not made by Ladd - never uttered - is that the increased competition from multiplied corporate media sources did not bring more information or knowledge, but rather much more PR, propaganda and disinformation. Citizens actually were in the ironic condition of having hundreds more news sources, but 95% of them inundated with noise, piffle - of little or no use, or PR. In the last case the "news" produced was deliberately intended to mold the public mind a la the dictates of Edward Bernays. Recall his famous words:

“The conscious and intelligent manipulation of the organized habits and opinions of the masses is an important element in democratic society. Those who manipulate this unseen mechanism of society constitute an invisible government, which is the true ruling power of our country.”

In league with this mindset, Bernays believed firmly in the value of hierarchy in society. He posited – like earlier aristocrats, the existence of an ‘intelligent few’ with whom he would deign to share his methods. But the vast bulk were ‘masses’ who were owed no special consideration. These fully deserved to be engineered by the processes of information, toward an array of desired ends. The corporate media was to play a major role in this from the 1970s on.

One of the unnerving ways mind-shaping is done is using framing of the language. In its expose article, 'Unfit to Print', The Nation, (July 28/ Aug. 4, 1997), documented how the U.S. press is heavily weighted in the slant of its opinions toward the Corporatocracy. Citing a 1997 text by Norman Solomon and Jeff Cohen ('Wizards of Media Oz: Behind the Curtain of Mainstream News') the Nation authors pointed out that Solomon and Cohen turned up "the misleading phrase 'welfare reform' in 22,013 print news pieces about aid programs for the poor... while 'corporate welfare' showed up only 2,351 times, and 'corporate welfare reform' only 17 times."

Thus the mind shaping was done to alienate citizens from those ordinary people receiving government welfare, and to omit mention of the much larger corporate welfare.

"Mass media such as television diminish the freedom of individuals to communicate - not by direct censorship (the individual can still stand on a street corner and attempt to talk to passersby) but by swamping, by drowning out, by denial of access to an audience. Few people realize that all television and radio channels belong to the public, not to networks, not to corporate station owners and sponsors"

So if they belong to the public, why isn't the public voice expressed more often? The reason is simple, the corporate owned and operated media have their own agendas, which are independent of anything that their readers might desire. Hence, though 60% of the public at one point in 1998 professed to want the media to 'get over it already' with the Clinton-Lewinsky nonsense, the corporo-media's CEOs and owners keep the pot boiling for political reasons.

Given all this, it is somewhat humorous to hear and see mainstream news and media defenders pontificating on the need for "professionals" and "gatekeepers" as they launch sundry jeremiads against blogger nation, while they themselves sold out and betrayed the American citizen a long time ago.

Readers interested in many more examples of the corporo-media's nefarious acts, censorship and efforts at mind-shaping can refer to these past blogs:

http://brane-space.blogspot.com/2010/01/us-propaganda-industry-media-part-iiib.html
Posted by Copernicus at 9:54 AM