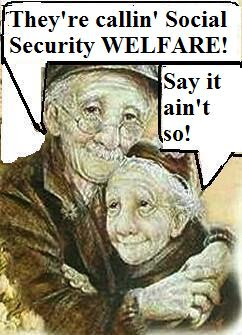 Well, as I surmised and feared, it didn't take long for a Republican to use the payroll tax cut and newly proposed extension of that holiday to attack Social Security as "welfare". An easy question: What is it that enables Social Security to continue without meeting the same end as welfare, as we saw in the 1996 Welfare Reform Act? Well, because it pays for itself, using the payroll taxes paid in by current beneficiaries to pay for current retirees' benefits. This was why FDR in his wisdom adopted the mechanism to cover Social Security's future payouts. He knew that this would be the optimum way to protect it, especially from the spectacle of yearly congressional budget approvals.

That was the reason I pilloried the decision to even remotely accept payroll tax cuts as a way to benefit the middle and working classes. See, e.g.

As I noted therein, NONE of these tax cuts work - there's no evidence for any of them helping to fuel the economy, and second, the Dems are giving the Repukes future ammo to use against Social Security and to justify cutting benefits because "it's not paying for itself any more".

"The whole idea of having a dedicated payroll tax that supports a Social Security "trust fund' rests on the notion that you get what you pay for. A worker suffers payroll tax deductions that the government is supposed to hold onto - separated from the rest of the budget- to fund a large portion of that worker's Social security and Medicare payments upon retirement.

But cutting the payroll tax while holding Social Security payments steady means there really is no trust fund and Social Security is just another redistribution of income program."

The problem is that as much as I detest Fleischer, and always have, his logic is correct. If one is going to reduce payroll taxes, then if there are no offsets to those losses, technically Social Security payments should be reduced to reflect the payroll tax lost inputs. Since this will amount to $200 billion over ten years, then that would likely translate into about $50 a month per beneficiary. Way too high for most.

But this is exactly why I deplored the very idea of the Dems using payroll tax "holidays" to try to win pre-election year kudos from voters. They ought to have instead confronted voters, citizens as adults and laid it out straight:

"Look, we can give you around $1,000 a year extra in your wallet with these payroll tax cuts, but it will mean severe cuts to your Social Security benefits later. Which do you want?"

Instead, the Dems (and Obama) have played a cynical game in which many voters have been led to believe they can have their cake and eat it too. In this sense, blogger Richard Eskow's take is spot on ('The Long Game: Payroll Taxes, Hostage Taking and Social Security')http://www.smirkingchimp.com/thread/richard-eskow/39907/the-long-game-payroll-taxes-hostage-taking-and-social-security

"By proposing to expand and extend this 'holiday,' Democrats have bypassed more efficient ways to help the economy, and have once again endangered Social Security. And by demanding tax breaks for millionaires while blocking them for the middle class, Republicans have once again demonstrated their willingness to blow up the economy for self-serving purposes."

As for Fleischer's piece, make sure you know it will be used as a universal template for action against Social Security if the Repukes take over all of the government next year. They will argue, with plausibility, that S.S. payments need to be cut to reflect the payroll tax cuts. It is then that people will see that they accepted a pig in a poke, accepting small temporary increases to their wage packets for a monstrous cut in future retiree benefits later, meaning most will now probably never retire. While at the same time the Dem pols have essentially exposed their sacred "Trust fund" as an accounting gimmick.

Fleischer has also theorized the payroll tax cut will be made permanent, which would validate his calling it a "welfare" program and we know what happens to those!

We can only hope that if the Dems do succeed in retaking the House next year, and hold on to the Senate, they will rectify the damage they've done. That means NO more extensions of any payroll tax holidays, and moreover, re-instating the tax at a higher level to compensate for the losses (say by increasing it to 7.2%) if other offsets aren't used to pay for them.

One thing we cannot do is allow the perception to spread that Social Security is no longer paying its own way. If that becomes entrenched, and it well might, we could see the horror of yearly budgetary approvals for its payments, before the elderly, sick and disabled receive a dime. This is totally unacceptable and no political gamesmanship can make it right!
Posted by Copernicus at 10:56 AM