Of Tweets and Twaddle 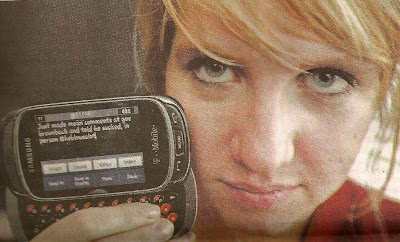 Much has been made recently of the tweets seen around the world, as sent by Fairway, KS senior Emma Sullivan. (See top image in which Emma is shown displaying the tweet she sent to her friends about Kansas Governor Sam Brownback). To recap: the Kansas high school senior heard Brownback speak recently in Topeka and after hearing his usual drivel (he was never much better as a repuke Senator) sent off a Tweet to maybe 60 followers which read:

"Just made mean comments at gov brownback and told him he sucked, in person #heblowsalot#"

Well, make no mistake, Brownback got off much easier from Emma than he would have from any group of 60s radicals! But the actual fact is that Emma never even had met Brownback (fortunately for her!) only confected her Tweet as a joke among friends. In the normal course of normal news events it would indeed have been a temporary blip on news radar.

But in the overheated world of the 24/7 news cycle it became an instant major story, i.e.

This occurred after Brownback's storm troopers, patrolling the net for any mentions of his name (who the hell do they think he is, 'God'?) encountered the tweet and went ape shit. The next thing you know, Brownback's consiglieri contact 'Youth in Government' which in turn contacts Emma's principal.

Like so many today who've turned into craven twerps in our militarized post-9/11 memosphere, this guy punted. Instead of defending Emma's free speech rights, merely sending a message embodying her thoughts as a joke to friends, this chump calls Emma into his office and berates her for "embarrassing the school" and orders her to apologize to Brownback.

To her credit and in praise of her courage, Emma refused. She would not give in to these tinhorn tyrants, whether from Brownback's staff or her pussified principal. She was also subsequently vindicated as Brownback apologized to her, saying his staff had "over reacted". Uh....duh!

But why or how did this even become an issue? It never should have! One ought not be persecuted, no matter one's age, for one's own thoughts shared among friends. Nor is there any need to lecture Emma as one conservo WaPo harridan named Ruth Marcus did in a recent column ('Parents Have Duty to Teach Acceptable Use of Language'), writing at Emma:

"That smartphone? The one you posed with, proudly displaying the hashtag '#heblowsalot"'? That ought to be turned off until you learn to use it responsibly!"

Ruth! Ruth! She's a teenager! She's not a company hack, or pawn in the corporatocracy! She's entitled to send funny jokey, even disrespectful (of 2-bit authorities) tweets to her pals! You're holding her to the same standards as corporo-journalists!

"I may be sounding alarmingly crotchety here, but something is upside -down in the modern world, which has transformed Sullivan into an unlikely Internet celebrity and heroine of the liberal blogosphere."

Again, Miss Marcus, the blogosphere is not the corporate news mainstream media. Emma's smartphone was not a corporo-news office! It is not the obligation of the news mainstreamers to pick up anything the blogosphere finds of interest and write about it. Moreover, it isn't the blogosphere- liberal or other- turning Emma into a "heroine" since the blogosphere at most reaches maybe 20 million, and then not all at once or with the same emphases and stories. No, it is the corporate news media, such as you at WaPo, that opts to also run with the story, or via columns like yours, that converts Emma into a news and media star, which truth be told she may have no interest in herself.

You and your corporate cohort need to get a grip on reality. And stop scolding teenage girls for having the audacity to express their thoughts, whether dark or politically "incorrect" in today's marshmallow purview of sameness and PR distortion.

In other words, Ruthie, get a life! And btw, if you and fellow mainstream hacks don't want ordinary tweeters (or bloggers) to become "heroes" or "heroines", then don't make them part of your running news stories! DOH!
Posted by Copernicus at 8:30 AM