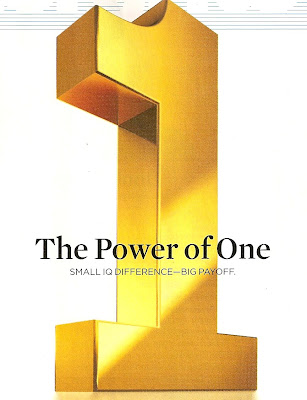 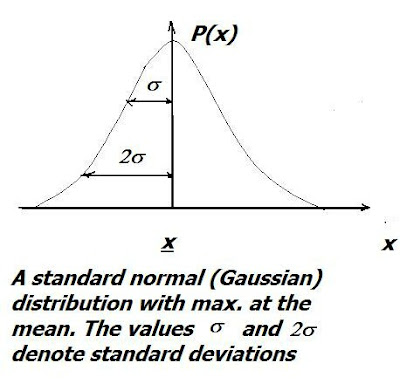 The problem with mainstream magazines that purport to adopt scientific standards, but in popular form, is that the neophyte can easily be suckered in to accept that any pronouncements or claims therein have equal validity to findings in a refereed journal article. Note first, that the latter aren't simply accepted even if a paper appears to show some 'proof' or correlation. It doesn't enter the realm of approximate validity until and unless it is confirmed by independent researchers.

Thus, the recent offering in Psychology Today (Jan./Feb/ 2012), 'The Power of One', claiming that a 1 -point difference in IQ can make a "difference" must be reckoned as mostly babble without foundation, especially statistical. Before going into the assorted claims of the article, let's back up and understand several things about IQ tests.

First, there are different tests, i.e. Stanford -Binet, Wechsler (or Wechsler Adult Intelligence Scale, WAIS etc.) and they each offer different IQ measures. Thus, a 130 in the Stanford -Binet will not in general mean the same as 130 IQ in the WAIS, or the Wechsler for children. So the 1 point IQ difference amounts to gibberish unless the specific test is specified. (If one is referring to a specific individual's score in relation to a sibling's and performance characteristic issuing therefrom).

Second, IQ is not a precise number to identify one's abilities, nor is IQ-testing an exact science. Scores from tests are really estimates based on test performance on a particular day. There is always a margin of error (variance). The "actual" score could be higher or it could be a little lower within the margin of error). Thus one might give the Stanford -Binet IQ as 130 +/- 5. In effect, a 1-point IQ difference is literally "swallowed up" by the variance associated with any given test result as well as any aggregate of such. While the latter will remove some of the variation it can't be used as a basis to make major generalizations apart from what standard deviations allow, say on the Bell curve.

Recall in previous blogs I noted the bell-shaped curve which defines what we call the normal distribution, which presupposes a tabulation or assembly of results randomly selected. In the case of IQ (after normalization with all the various tests) the score of 100 will fall at the exact center or where the Gaussian peak occurs. The standard deviation used in many tests, including the Weschsler IQ test, is 15. The majority of test scores (about 70%) fall somewhere between one standard deviation below and one standard deviation above 100. That means most scores are somewhere between 85 and 115. Those scores are considered the "average" or normal intelligence range.

What one has in defining a category of IQ test takers is therefore a spread not definition enabling a precision to 1-point difference in IQ! The farther a score is from 100, the fewer people we will find with that score. If we move one additional standard deviation below and one additional standard deviation above 100, we will find about 25% of the scores falling within those ranges. In other words, people with IQs between 70 and 85 and between 115 and 130 make up about 25% of the population. That leaves only about 5% of the population who will have scores somewhere beyond those first two standard deviations away from the norm.

Because of the nature of the spreads created by the standard deviations (which again, are peculiar to the nature of the statistical distribution we call a Gaussian or Bell curve - see attached graphic with x-underbar the norm) we obtain categories of giftedness from the IQ test scores. In general, these can be assessed as follows:

Again, it is ludicrous to believe one can make a clear distinction between any of the above groups based on a 1 -point difference. (Even if one did appear, say between 129 and 130 or between mildly and moderately gifted, one still has to factor in the margin of error or variance. Then again, what if the person took the test on another day when he or she didn't feel as well? This difference could putatively be negated!)

Lastly, there is the matter of correlation, which in very crude sciences such as psychology has become overdone, though I admit they do come up with fancier forms all the time. The point is that even for a very high Pearson product -moment correlation coefficient, e.g. r = 0.80, that doesn't signify causation! Correlation is not causation so it's dangerous to infer the latter even if one actually were to obtain r = 1.0.

What then of the claims made by the PT article? They are as follows:

- Every additional IQ point in a group results in a 1 percent increase in the likelihood of cooperative choice.

- For each additional point in the national IQ of their country of origin immigrants to the U.S. earn 1% more per year.

- By age 35 every additional IQ point you have - say over siblings - means an extra $810 earned per year.

- Each additional point in their country's IQ meant a foreign diplomat had 6.2% fewer unpair parking tickets

- Every 1 point enhancement in the average IQ of the smartest 5% correlates with an extra $468 in per capita GDP.

Note first, that there is a conflation between single IQ point differences in the examples. We see the alleged benefit of a sibling over his fellows in terms of assumed earning power, then also see what is referred to as a "national IQ". But we are talking chalk and cheese here! Even if one could nominally extract a 1 -point difference for an individual (which as I showed is statistically impossible given the standard deviations lead to spreads and IQ testing isn't an exact science) that doesn't translate into anything like a "national IQ".

What does the "national IQ of a country" mean anyway? What if a country is small, like Barbados, but has a vast number of foreign workers, expatriates who are very talented? How does one isolate their contrbutions? How does one measure national IQ at all? It is a common error of statistics to simply lump all IQ test scores of all citizens and take an average then call it the 'national IQ'. In reality, there is no such thing.

The nonsense example of fewer parking tickets paid based on a national IQ for a diplomat is even more absurd. This reminds me of one 1977 study which found a 0.9 correlation between an increase in the sighting of unidentified flying objects and the oppositions of Mars. The unwary or careless were tempted to take this to mean that on Mars' closest approaches (at opposition) the probability of alien visitors in space craft was greatest. Hardly! It merely disclosed a correlation between two disparate sets of data, which otherwise bear no relation to each other. The same between unpaid parking tickets and diplomats' "national IQs".

The last example of a $468 bump in GDP may be the funniest howler of them all, given that GDP is also a very poor economic indicator, as pointed out by University of Maryland economist Herman Daly. Let's leave out the fact that it's dubious (based on what I showed already with the spreads based on standard deviations) that one can actually obtain the "average IQ of the smartest 5% of a nation", and that even if one could - the standard error would likely be so large as to make the number meaningless.

But let's look at what this meaningless number is alleged to be correlated against: the GDP. In his lecture 'Uneconomic Growth: in Theory and in Fact', at Trinity College in Ireland, Prof. Daly noted the GDP is supposed to measure the total production and consumption of goods and services in the United States. But the numbers that make up the Gross Domestic Product by and large only capture the monetary transactions we can put a dollar value on. Almost everything else is left out.

Thus, 40 million -odd people, putatively possessing as high an IQ as their commodities trader and investment bank brethren, are now currently caring for one or more ill or disabled relatives. Their total monetary contribution has been estimated by the AARP as over $400 billion. But not one cent of that is factored into the GDP. Then what does GDP mean? Well, a confected number for a certain cabal of economists to try and push policy decisions that follow their own agenda.

The bottom line is that pop-science or pop psychology are very shaky foundations on which to base claims or findings. Is there "power" in 1 IQ point difference? Maybe! But then there's also power in one slice of baloney too! It just depends on when you eat it!
Posted by Copernicus at 6:12 AM