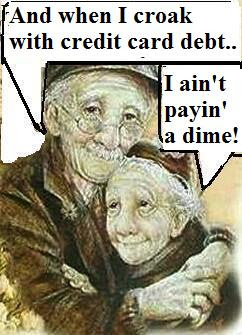 As I noted in my book, 'The Elements of the Corporatocracy', when an economic system is thoroughly unjust, unbalanced and rigged, then assorted species of financial reptile will emerge - trying to gain an unsavory advantage for their masters (usually banks). I thought I had seen the worst of these vipers in the case of "viatical insurance" which I'd blogged about last year.

The dynamic was described in the article ‘Grim Rewards for Reaping Death’s Benefits’ in The Wall Street Journal (Feb. 6-7, 2010,page B-10).

"Say you purchase a $1 million policy held by an 82-year old woman. Actuarial tables say she has five years to live. If you do the deal via Life Partners’ Holdings, Inc. – a major life-settlements firm, you must pony up $540,000. The woman gets $200,000 of that, the remainder goes toward future premiums and transactions fees.”

The article went on to note that if the subject “dies on time” the investor earns a 13% annual return. But if she lives for another ten years the same investor will end up shelling out much more in premiums and the return sinks to 3%. As the article puts it:

“Every year she soldiers on, your take shrinks”

Is it just me, or does anyone else see something inherently wrong with this, including the potential for "unintended consequences"? Say like an unscrupulous investor “speeding up the game” a bit to maximize her or his returns?

As if that wasnt bad enough we now behold an equally scurvy breed of "death debt" collectors, who emerge usually within days of a loving spouse's death, and demand the surviving spouse repay any monies, debts owed, inluding to credit card companies. According to one genius quoted in the piece (WSJ, p. A10 , 'Collecting on the Debts of the Dead'):

Uh...yeah, maestro, they do! The LAW stipulates that NO survivor, spouse or other relative, is on the hook for debt repayment, provided:

-The surviving spouse was not a co-signer to the loan, say mortgage.

- The surviving spouse was not a joint owner of the credit card to which the debt accrued.

So, let's say Joe Schmoe croaks, leaving $16,800 of credit card debt on his own Citibank, Amex, or other account. Is his wife Mary Schmoe now responsible to repay it? No fucking way -not now or ever. Yet these putzes are now perfecting the art of going after vulnerable spouses to grab their money, even if they may have been left totally impecunious -say by having to pay off medical debts.

In the article one 68-year old woman is referenced whose husband died of colon cancer. She was left, after paying all his outstanding medical bills (and even selling their trailer home to do so) with only $2,000 of life insurance benefits. Yet a vermin collector phoned her to try to get her to turn it over, despite her saying it was all she had to live on! She repeatedly professed she was "destitute" but the asswipe persisted in trying to get her to beg for the money off other relatives and when the woman said that wasn't on, he hamboned for "anything you can give". I suppose the rat would have taken the clothes off her back if he could have gotten them!

"Debt collectors that target money owed by dead Americans tout their ability to get a lender's money back without public relations headaches."

Oh yeah? Well, I invite other bloggers to highlight this malignant aspect of our tyrannical economic system to multiply your "headaches" by thousands, if not millions. To that end, other bloggers- please feel free to copy and circulate this blog at will! The more people that know about their rights, the fewer chances for these reptile vermin to prey on them in their most vulnerable times!

And what does our illustrious Federal Trade Commission (FTC) have to say about all this? Well, they issued "guidelines" in July, after listening to hours of taped phone conversations between death debt collectors and survivors . One thing they found recurring is that a number of the debt deadbeat collectors misled survivors into believing they had to pay.

At the same time FTC officials rejected outright all requests by lawyers of the spouses for an outright ban on calling family members. The agency also declined to allow a "cooling off period" during which relatives couldn't be contacted by debt collectors. So what fuckin' use are they.... to the citizens, the PEOPLE? Well, my rejoinder here is why would they be any use if - like other fed agencies - they are putative captives of the corporatists, banks, Big PhrMa, Big Oil etc.? In other words, whores that serve the corporate predators not the people. Hence, we see the SEC overlooking all sorts of financial shenanigans and even missing Bernie Madoff's Ponzi scheme. We see the FDA looking the other way while Big PhrMa plies its wares on the young - as recent ABC news has shown - pumping foster care kids full of anti-psychotic meds. We see other agencies also looking the other way as the PEOPLE are being screwed by the corporate parasites in sundry ways - from obtaining personal information illegally, including Social security numbers, to refusing to hire anyone who's been unemployed overly long.

Meanwhile, the debt collector refuse are trained to hone their skills to maximize their monies from survivors. As the WSJ piece observes:

"Collectors in the death-debt business use carefully calibrated techniques and often begin their calls with a sprinkle of grief counseling. DCM Services, LLC uses what it calls 'empathetic active recovery'. "

"Handled apprpriately, we believe our Account Representatives can create a positive emotional experience with survivors".

Meanwhile, another bunch - Phillips & Cohen Associates, Ltd. "tries to convince families to make a 'morality payment' - according to the debt collection agency's training materials reviewed by the WSJ.

A 'Morality payment'? Are you fucking kidding me? Many of these spouses are just barely hanging on, financially as well as emotionally, and you're humbugging them to pay a dead spouse's bills or credit card.....and leaving them with no financial support? What kind of fucking "morality" is that? It's nothing!

The LAW stipulates the families are not responsible, hence it isn't incumbent on them to beg others to help pay these debts, or to use the few dollars they may have from a life insurance policy to "make good". No, that train came to the station and left....You're stuck with the losses, too damned bad. Given how much your bankster masters have heisted from the nation, I'd say consider it karma paid back!

In other words, suck it up, and write if off as a cost of doing 'bidness'...as opposed to converting yourselves to disreputable human refuse. (And btw, yes - I feel it's preferable for a person to remain unemployed than to accept such a disreputable, immoral job!)

At least, from the article, a number of families are fighting back and filing lawsuits to finally end the incessant death debt pestering and harassment. But in a proper nation, one with any real moral ballast, they shouldn't have to spend money to protect themselves, and the government ought to at least have one agency not pussified or co-opted that can tell these collection assholes to stop, forthwith! But alas, that's not the government we have, what we have is a Corporatocracy. See also:

http://brane-space.blogspot.com/2011/10/more-insights-into-wall-street.html
Posted by Copernicus at 12:20 PM