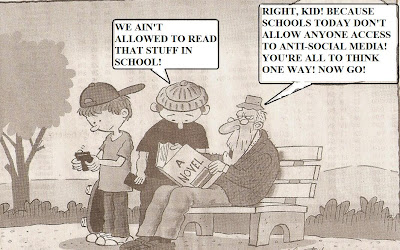 It made sense, based on a recent Censorship News report (No. 115, Fall 2011) that the financial press-media would have a first vested interest in ensuring the media and especially books for kids remain bland and "happified". Thus, the reference to a WSJ piece in which "dark themes" in young adults' lit were criticized. Nix on "violence", "bad role models" (or deemed such by adult judgmentalists), "denigration of religion" or questioning of "authority" (which we definitely need much more of). All of these may contribute to a state of youth anarchy and then who the heck would buy the new ipads, jeans or whatever?

Finance always favors pseudo-social stability and the everpresent smiley, at least as a veneer (they are quite happy to keep feeding 'zombie' banks with trillions of dollars of toxic assets our money!) because it favors the consumer culture, while dark themes don't.

Fortunately, in the case of the WSJ tommyrot, some authors didn't take it lying down. Sherman Alexie and Chris Crutcher, for example, defended novels that delved into previously "taboo" subjects - asserting that such books were life savers for many teens who experienced that darkness first hand. Hence the books validated their experience as opposed to keeping it out of sight or what philosopher Alan Watts has called "ob-scene" (off-scene).

The trouble now, as the Censorship News reports, is that judgmental adults - especially those associated with local school boards- are getting carried away and wholesale banning certain books that don't agree with their world view or what they believe young people ought to read. And again, I personally have no problem if one or a few parents (who usually apply the pressure to school boards) want to keep certain fare from THEIR kids, but that doesn't mean they ought to be given carte blanche to impose their narrow views on all others.

For example, there is the case of the fundie religious bumpkins in Republic, MO, who evidently think 'Slaughterhouse Five' is "Satanic! This is the novel by Kurt Vonnegut about a GI's WWII experience when caught up in the Allied bombing of Dresden, and his time trips into the future and back into the past deriving from the traumatic event. (Nearly 35,000 were burned alive by the offical count, but my German friend Kurt maintained it was more like 85,000). Anyway, the complaint from one of the parents that incepted the debate in Republic, MO was (ibid.):

"It is an abomination to God to expose children to books like 'Slaughterhouse Five' ....It is difficult to understand how a school board and school administration that claims to be Christian and profess Jesus Christ can expose children to such immoral and vulgar content"

That this codswallop, babbling about one of the 20th century's most original works could get a serious hearing is beyond me, and shows how far this nation has retreated in terms of sense and rationality. (Which extends all the way to our politics and economic system now). But in response, the school board decided to "adopt standards for books" for use in the school curriculum and library.

Those standards turned out to be specifically tailored to disqualify all books that contained certain types of content, including: profanity, violence, sex, and references to drugs, alcohol and tobacco. The funny thing is that most American kids are exposed to these things anyway, every day on the net! What, does the school board have its collective head where the Sun doesn't shine? Or, maybe it is a case of pandering to religious fruitcakes.

The real joke? The reviewers have been advised to scan all proposed books for any such content and especially any red flag words, such as:

Not to mention any emergence of the ubiquitous f-word and the primary word denoting regularly eliminated human scatological debris, and commencing with 's',

Are you shitting me?

But it gets worse! The adult moralists and judgmentalists were also advised to nix any book with objectionable phrases, including:

"He had a prophylactic kit containing two condoms"

"Pencil drawing of a woman's breasts"

As the Censorship News aptly notes:

"Deciding what books students should read in school is not like deciding what movie to see or what video game to buy. Books in school should be selected for their educational and literary value and not for their absence of certain words and phrases"

At least, despite this, we know that any kid in any school district - even the most reality phobic and puritanical - can access any book he or she wants online and read to her/her heart's content. That's because the pointy -headed little judgmentalist moralizers haven't brought their grubby little paws down on the net....at least not yet!
Posted by Copernicus at 6:36 AM