The Most Loathsome, Destructive Tax Cut: So WHY Do Dems Support it? 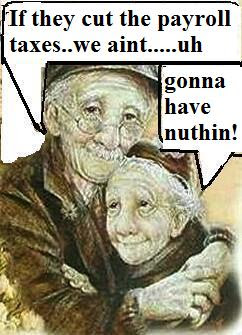 I continue to scratch my head at how the Democrats operate, and wonder what they are really invested in, and especially whether they truly support the Middle Class of this country. Here's one of my head-scratchers: We know some 4,000 Boomers a day are filing into the Social Security system to collect their benefits, so WHY are the Dems proposing to keep this god-forsaken payroll tax cut when the payroll taxes are what support Social Security funding?

Don't they have any sense? Can't they see they are essentially enabling the consumption of their own seed corn in terms of social benefits (mistakenly called "entitlements") to the Middle and working classes? Thus, the news in today's WSJ article ('GOP Set to Back Payroll Tax Cut', p. A4) that the Dems not only wish to extend this payroll tax holiday but reduce it to 3.1% of payroll tax, is both appalling and infuriating.

First, because NONE of these damned tax cuts work - there's no evidence for any of them helping to fuel the economy, and second, because you are giving the Repukes future ammo to use against Social Security and to justify cutting benefits because "it's not paying for itself any more". So hey! No wonder the GOP would back this dimwit plan! They will back any tax cuts...because they know any of them ultimately increase deficits and help starve government....and especially PAYROLL taxes!

So no wonder Mitch McConnell has stated(ibid.):

"I think at the end of the day, there's a lot of sentiment for continuing the payroll tax relief"

But the existing "relief" is costly, to the tune of $170 billion defunded from Social Security each year, at time when the strain on the system is magnifying via Baby Boomer retirements. Add in all those now taking Social Security disability (because they can no longer collect unemployment benefits) and you have the makings of a disaster.

Thus, inquiring minds are led to ask why the party which instituted Social Security is now having a stake in sealing its demise by their cowardly and blatant vote-pandering when what we need now is ADULTS. We need adults to tell the American people that NO tax cuts are affordable, neither for the rich or the Middle Class, given the deficit-austerity environment.

And further, that Americans cannot have their cake and it eat it! If they receive tax cuts, whether via payroll tax cuts or the Bush tax cuts, then their future social benefits are in jeapordy. The reason is that any of these tax cuts effectively raise the deficits to such levels that make extending benefits without draconian cuts impossible.

In this sense, blogger Richard Eskow's take is spot on ('The Long Game: Payroll Taxes, HOstage Taking and Social Security')

"By proposing to expand and extend this 'holiday,' Democrats have bypassed more efficient ways to help the economy, and have once again endangered Social Security. And by demanding tax breaks for millionaires while blocking them for the middle class, Republicans have once again demonstrated their willingness to blow up the economy for self-serving purposes."

But the DEMs are ALSO self-serving! Indeed, they know the payroll tax holiday has already cost big money and will be amped up to well over $250 b next year if the expanded payroll tax cuts (down to 3.1%) and employer cuts go through. So no wonder they are very likely in the process of making a deal for a Social Security COLA reduction, or as Eskow notes:

" a Social Security benefit cut that both the White House and some other Democrats (including Dick Durbin) have been pushing all along. They call it an 'adjustment,' but their proposed method for calculating cost of living (COLA) adjustments is a benefit cut, pure and simple, that would lower an already-inadequate formula and take money out of people's pockets. It will probably be revived in these debates."

In other words, the Dems are guilty of giving you money (payroll tax cuts) with their right hands, and robbing it with their left! (Via proposed COLA adjustments)

How can anyone consider such a political climate as anything other than batshit crazy?

The sanest move now is to halt ANY further tax cuts forthwith. Start with letting all the payroll tax cuts expire, and then all the Bush tax cuts. Better that than tens of millions having to raid dumpsters for the next thirty or forty years!

Oh, one final point in all this: the phony argument that cutting payroll taxes "makes no difference because no special accounts exist" e.g. for Social Security ( including special Trust Fund accounts), and government can "move money any way it wants", is bollocks. To quote from the original (1935) Social Security Act:

"It shall be the duty of the Secretary of the Treasury to invest such portion of the amounts credited to the Account as is not, in his judgment, required to meet current withdrawals. Such investment may be made only in interest -bearing obligations of the United States or in its obligations guaranteeed as to both principal and interest by the United States."

In other words, the matter is not simply one of finding "offset" cuts (as the 'pukes wish to do) to pay for the payroll cuts, but government itself being prepared to pay back what's allowed to be used from those payroll taxes, and with INTEREST! In a high deficit environment it's just a foolish fiscal move, and not one worth the minimal economic gain that the pols promise!
Posted by Copernicus at 9:08 AM